This Dog Protects Wildlife in the Funniest Way Possible 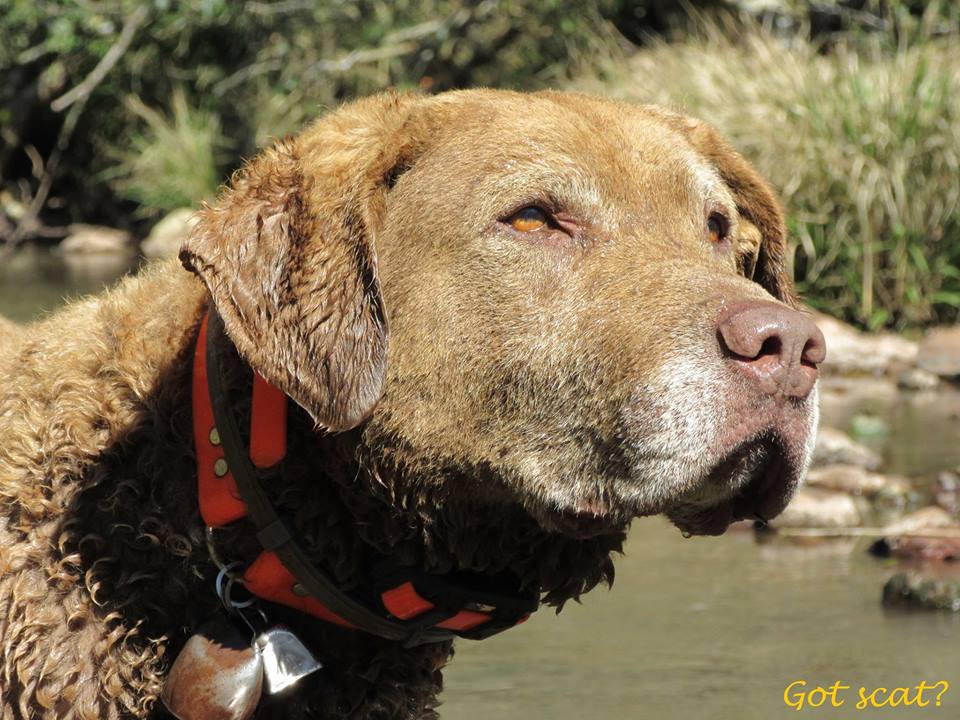 Don’t poo-poo the idea. It works!

Although most dogs enjoy the smell of the droppings of other animals, one special pup is using his unique poo-sniffing skills to help endangered wildlife. Train, a Chesapeake Bay retriever, was practicing to be a police dog when he failed out due to an overabundance of energy. Now, he sniffs out the scat (poop) of evasive wild animals such as jaguars and oncillas in an effort to help conservation.

Train’s owner, conservation biologist Karen DeMatteo, uses his sensitive nose to pinpoint the habitats of endangered animals. Since endangered animals are, by definition, hard to come by, Train’s unique poop sniffing powers are a valuable asset to understanding the most important natural areas for animal conservation. Once Train identifies a dropping-rich area, it can help conservationists to determine which areas ought to be prioritized in preservation efforts.

Not only can finding animal droppings reveal a lot about where they live, it can reveal plenty about the animal that dropped it, even the creature’s gender! “You can figure out which habitats they like and which habitats they avoid” said Train’s owner, in an interview with CNN. “Everywhere, people are expanding,” DeMatteo says, “We can try to figure out areas of potential overlap between humans and wildlife. We can identify areas that need more work, areas that are great corridors, or areas that are kind of lost to the cause.”

For a while, Train’s story wasn’t the happiest one. After failing as a narcotics dog, Train had to be taken in by the Humane Society. Lucky for him, DeMatteo was on the lookout for dogs to go to the Argentine province of Misiones to help her with a research project. Train, due to his previous detection training, was a shoe-in.

Although his high energy levels might have caused him to fail out of drug-sniffing school, his exuberance is a huge asset in his new line of work. Last year, Train covered about 1,000 kilometers of forest on his search for wild animal droppings.

“Train was just a machine,” said DeMatteo, “We just switched him to use all that energy and search really big areas and find this poop for us.”

Before Train, the search for endangered wildlife was often reliant on sensor-equipped mounted cameras, able to take footage of the animals as they passed by. It wasn’t the most effective method, since it relies on animals walking into a specific area. Also, some people are understandably hesitant to allow 24-hour camera surveillance of their property. Dogs, however, can overcome many of these challenges. They can cover expansive range of territory, and people are often more receptive to having dogs on their land than 24-hour surveillance cameras.

“They’re afraid you’re going to take their land or do something funny, and we explain that we just want to look for poop and find out where animals are moving. And they’re like, ‘Oh, cool, can I come?'” said DeMatteo.

Train might be 12 years old, but he’s showing no signs of slowing. His next stop will be to Nebraska, where he’ll help track mountain lions later this year. Train, along with a border collie named April, have opened plenty of doors when it comes to animal conservation. How fitting that in rescuing a dog like Train, researchers can rescue a whole suite of endangered animals to boot.

Love stories about animals? Check out Jaguar Who Attacked Woman That Crossed Barrier for a Photo Will Not Be Put Down! For more Animal, Life, Vegan Food, Health, and Recipe content published daily, don’t forget to subscribe to the One Green Planet Newsletter!