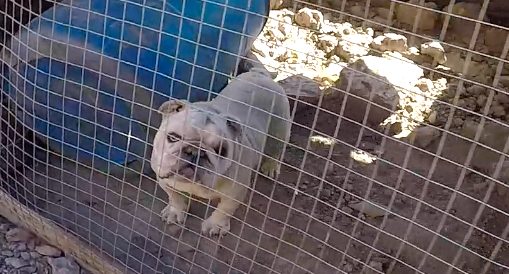 On August 29th, a historic first occurred when defendant Gonzalo Ariel Rebolledo Robles — an illegal dog breeder and known dogfighting organizer — received the maximum sentence of three years imprisonment and the maximum fine of three Monthly Tax Units, as well as a lifelong ban on ever having an animal in his possession again.

Prosecutor Julio Palacios Bobadilla said this is the first-ever conviction achieved in the region for the crime of animal abuse resulting in death, following recent amendments to the law. Bobadilla pointed out that the conviction now sets a precedent going forward.

The road to this victory began in July of 2018 when an LFT reporter traveled to the Chilean town of Llay Llay and secretly filmed footage of nearly two dozen dogs living in filth and decay on Robles’ property.

Lady Freethinker’s investigation findings were horrifying: 21 sick, wounded and starving dogs living in deplorable conditions, their every need neglected. Tethered on short, heavy chains or held captive in cramped, filthy kennels with no food or water, their otherwise-empty bowls were coated in green slime. One pit bull displayed scars and wounds on his neck indicative of dogfighting. Other animals had seeping eye infections or other illnesses, with little to no hope of medical treatment.

In addition to the abused, neglected dogs, dozens of hens and cockfighting roosters were trapped in cages on the premises. Nobody appeared to live on the property to care for any of the animals.

Tragically, three puppies already lay dead on the ground by the time Lady Freethinker’s investigator discovered them, their corpses decomposing in the cold dirt. Medical examinations revealed that they most likely starved to death. These deaths aggravated the animal cruelty charges, leading to an increased sentence.

Upon discovering the suffering animals, LFT’s investigator alerted local law enforcement, who raided the illegal breeding facility that night. Rescuers removed all dogs from the property, placing them in foster homes to receive much-needed love and care.

Following the investigation, Lady Freethinker submitted to the San Felipean court a petition with more than 22,000 signatures from people around the world calling for justice in this case, and urging prosecutors to start treating animal cruelty cases with the severity they deserve. Their voices were heard and a historic ruling was made.

And now, thanks to Robles’ permanent ban on keeping animals, countless more dogs, chickens and other creatures will be spared from future abuse.

The sentence follows years of work by Chilean law enforcement, media and local activists to curb illegal dogfighting and breeding in the region. Robles holds a prior conviction for organized dogfighting from 2010; and in 2016, an undercover reporter for Mega television exposed the very same illegal breeding facility LFT investigated in the documentary, Perros de Pelea: Juego Perverso (translates to Fighting Dogs: Perverse Game). Still, Robles had never served a day in jail. In fact, nobody in Chile had ever served time for such crimes.

Thankfully for the animals, change is on the horizon in Chile. The public is no longer willing to accept cruelty to any creature, and the government is finally acknowledging the seriousness of committing violence against our fellow species. May this case send the message to all would-be abusers around the world that animal cruelty will not be tolerated.

They say the wheels of justice turn slowly, but it’s crucial to have patience and tenacity. Changing laws, or outdated cultural norms, does not happen overnight. But when that tide finally shifts, it is major, and it is significant. It has the power to move and migrate, with potentially far-reaching influence.

It may be hard to fathom, but we still have no federal law right here in the United States that criminalizes animal cruelty — those laws are left to individual states, which can be shockingly lenient. But the Preventing Animal Cruelty and Torture Act could finally change this by making animal cruelty a felony under U.S. law.

Help pass this crucial legislation today. Sign the petition urging congressional leaders to enact the PACT Act to toughen penalties for animal abuse in the U.S.