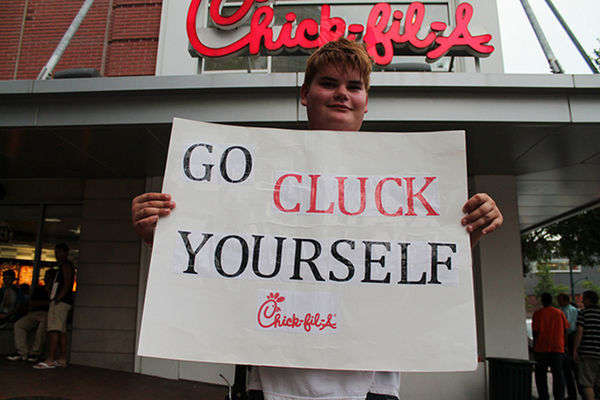 As mayors vow to block Chick-fil-A from opening new restaurants and crowds line up around the block to buy a piece of chicken, the row between Chick-fil-A and gay rights shows no signs of slowing. But people on both sides of the picket line seem to be overlooking a key point in their respective arguments.

Members of the LGBT community called for a boycott after Chick-fil-A President Dan Cathy commented, “[W]e’re inviting God’s judgment on our nation when we shake our fist at him and say we know better than you as to what constitutes a marriage.”

We should all be concerned by Cathy’s overarching message: that oppression and the denial of rights are OK as long as we do it in the name of “values.” Assigning value only to heterosexual marriages allows us to reject anything different—just like assigning value to our taste for flesh allows us to turn a blind eye to the suffering that it causes animals.

Throughout history, oppressed groups have had to fight for social justice. Thanks to their efforts, we now know racism and sexism, once lumped under “values,” to be wrong. Inevitably, other forms of bigotry, including speciesism, will follow suit. And the best way to accomplish that is for social advocates of all stripes to work side by side. Dr. Martin Luther King Jr. correctly stated, “Injustice anywhere is a threat to justice everywhere,” and it’s worth noting that after his death, as the concepts of gay rights and animal rights began to take shape, his widow, Coretta Scott King, was an outspoken LGBT advocate and a vegan.

On the opposite side of the debate are those who support Cathy’s assertion that Christian doctrine dictates that they must eschew gay marriage and are therefore lining up to give Chick-fil-A their money. But are they overlooking all the passages in the Bible that instruct people to have compassion and respect for those who are suffering? Certainly anyone who has seen video footage taken inside a slaughterhouse will agree that there aren’t many places that are more filled with suffering.

Perhaps instead of doling out money for fried food (and let us remember that gluttony is a sin), they should recall that Christ’s message was one of love and kindness and aim to practice the words of Luke 6:36: “Be merciful, just as your Father is merciful.” Or Isaiah 11:9: “None will harm or destroy another on My entire holy mountain, for the land will be as full of the knowledge of the Lord as the sea is filled with water.” Or Matthew 5:7: “Blessed are the merciful, for they will be shown mercy.”

Whether they are lobbying for marriage equality or lauding freedom of religion, people on both sides are bellowing for protection of their individual rights. But what about the inalienable rights to life, liberty, and the pursuit of happiness? The millions of chickens served up every day at Chick-fil-A certainly lost their right to life when their legs were thrown into shackles, their throats were slit open, and they were likely scalded to death in a defeathering tank at the slaughterhouse. They never knew liberty, only constant confinement to a windowless shed, the sting of ammonia in their eyes and throats, the pain of mutilations such as debeaking, and the horror of seeing the bodies of those who didn’t survive industrial chicken farming lying all around them. For these animals, there was never a chance to pursue happiness, only the daily struggles of stress and pain.

Contrary to what the bucolic depictions on cartons of eggs would have us believe, chickens on egg farms fare no better. Most egg-laying hens are never given the opportunity to do any of the things that they would do naturally such as breathe fresh air, bask in the sun, build nests, or preen their feathers. Instead, as many as seven of them are crammed into a single wire cage so small that none can spread a single wing. Many birds die from disease, and survivors are often forced to live among their rotting bodies. Female chicks are sentenced to the same fate as their mothers, and male chicks, who are useless to the egg industry, are suffocated or thrown into macerators and ground up alive. When their egg-laying wanes, hens are slaughtered in the same cruel manner as chickens killed for meat are.

Beyond these commonplace abuses, chickens used for egg and meat production often endure neglect and outright torture. Last month, 300,000 egg-laying hens died of heat stress over the course of three days on an Indiana farm owned by Rose Acre Farms because the company failed to cool the sheds that they were kept in. And an undercover PETA investigation of a Pilgrim’s Pride slaughterhouse in Moorefield, West Virginia, revealed that workers stomped on birds, kicked them, slammed them against floors and walls, ripped the animals’ beaks off, twisted their heads off, spit tobacco into their eyes and mouths, spray-painted their faces, and tied their legs together “for laughs.”

No charges were brought against any of the slaughterhouse employees because, as a county prosecutor put it, “these were chickens in a slaughterhouse.” Chickens are not even afforded the minimal protection of the Humane Methods of Slaughter Act, the only federal law that offers any sort of protection to farmed animals. That such a discrepancy occurs defies logic. Like all other animals, chickens feel love, happiness, fear, and pain. And they actually score higher on animal intelligence tests than dogs and cats do. Like people, chickens form strong family ties and mourn when they lose a loved one.

No matter which side of the Chick-fil-A flap you fall on, we must acknowledge that the real losers in this equation are the chickens who are dying to have their rights recognized.