WATCH: Dolphins and Whales Play Together 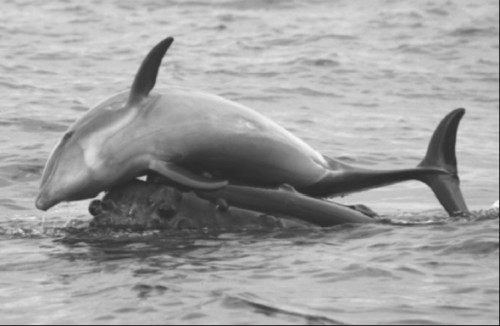 In rare display of inter-species amusement, bottle-nose dolphins and humpback whales were seen having a bit of fun off the coast of the Hawaiian islands of Kauai and Maui. The whales lifted the dolphins out of the water and then the dolphins proceeded to slide tail first into the water. Due to the repetitive nature of the events and the slow speed at which they happened, it is believed that they were acts of play and not aggression.

According to the American Museum of Natural History, who originally published the photos, “The two species seemed to cooperate in the activity, and neither displayed signs of aggression or distress. Whales and dolphins in Hawaiian waters often interact, but playful social activity such as this is extremely rare between species.”

It’s great to see that animals not only work together to survive but also play to together as well.