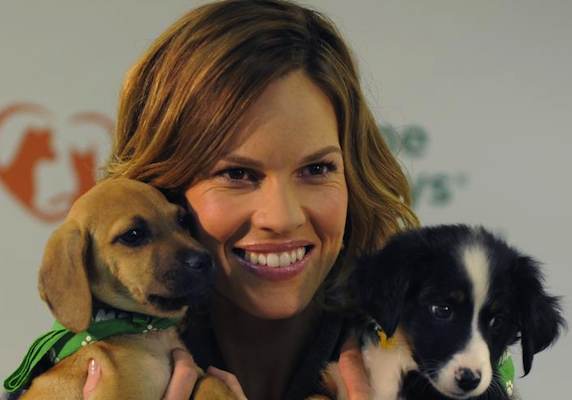 Actress Hilary Swank is one of the most critically acclaimed movie stars of our time. She has one Best Actress Oscars for her role in Million Dollar Baby and her portrayal of hate-crime victim Brendan Teena in Boys Don’t Cry. Hilary Swanks award winning empathy is now having an affect on the worlds stray animals.

Swank recently visited Bucharest, a city that struggles with high rates of poverty and stray animals. Vier Pfoten, an animal welfare foundation in the Romanian capitol, welcomed Hilary to thier projects. The organization promotes interaction between institutionalized people and  stray animals.

Hilary spoke to Associated Press about the impact the animals can have on people, “I believe that is so healing to these kids who don’t trust people anymore,” she said. “The unconditional love of an animal is very healing and teaches them about not just unconditional love but about a relationship, about responsibility, about anger management.”

The city of Bucharest currently has as many as 35,000 stray dogs and many believe that the dogs should either be put in shelters, euthanized, or sterilized. Swank is major supporter of sterilization, and the use of these animals as companions for those in need. She is starting a foundation in the US named Hilaroo, a combination of her name and the name of her late dog Karoo. Hilaroo will help bring animals to children who can benefit from the positive affect of a companion animal.

Swank, who rarely leaves the side of her rescued Jack Russell Kai recalls a great anecdote about the effect that the unconditional love of an animal can have, “There was a woman who didn’t get out of bed, and after a few weeks of the dog coming to visit, she’s up walking.”

Hilary Swank is a stern believer in no-kill policies and stated that, “Hopefully (we are) getting to a place where we have “No-Kill” universally and just a more caring attitude in general to all animals.”