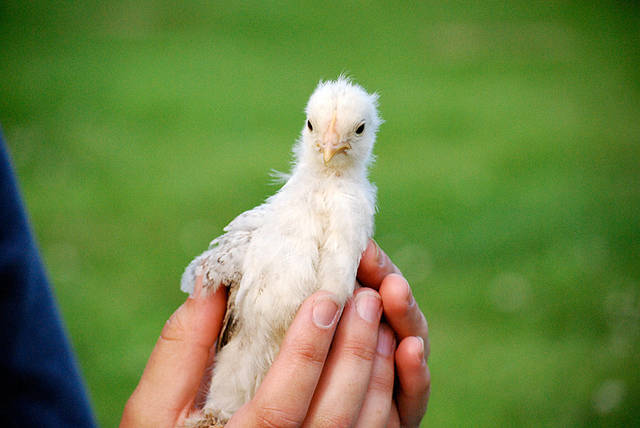 Lawrence City, Kansas officials have decided to ban artist Amber Hansen’s project, “The Story of Chickens: A Revolution,” saying it would violate city ordinances and that she could be fined $1,000.

Hansen had planned to display coops of chickens across Lawrence. The exhibit was to end with the birds being killed and served as a meal. She says she wanted to demonstrate the animal slaughter process to meat eaters.

According to Rocketgrants.org “The Story of Chickens explores the relationship of humans as both caretakers and consumers. The project consists of a unique nomadic chicken coop built to house 5 beautiful chickens. The coop will take residence in 3 well-traveled, high foot-traffic areas in, or within close proximity to downtown Lawrence, KS. The coop and the chicken’s presence will encourage community members to visualize an urban landscape that is accommodating and accepting of the presence of animals. During this time many members of the community will become engaged through scheduled story telling forums, proximity and caring for the birds.

Volunteers and community members alike will become guardians of the chickens as they share in the opportunity of caring for the birds. At project’s end, the chickens will be removed from the coop and butchered by local farmer/Mother Earth News Editor: Hank Will.”

Assistant City Attorney Chad Sublet told the Associated Press that the city weighed freedom of expression against health and safety concerns in reaching the decision.

We obviously don’t think think this art installation is a great idea, but where are the concerns about health and safety when it comes to what happens in slaughterhouses every day?