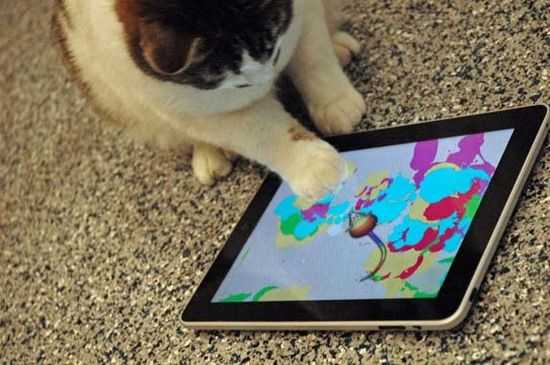 The Society of Prevention of Cruelty to Animals Los Angeles (“SPCALA”) has decided to take the iPad app called “Paint for Cats” and use it to actually help cats.

The app features a little mouse scampering across the screen, which encourages cats to whack at it, producing a splotch of color and a little squeak. This essentially continues till the whole screen is filled with color.

Associated Press recently reported that an Animal Planet crew visited the SPCALA for a recent episode of the show “Must Love Cats,” where they documented how four cats used the app to create art. The results were so compelling that the shelter turned them into notecards. The cards with drawings named “Study in Feather Toys” and “Movement in Catnip” are being sold online for $5.99 a pack.

SpcaLA spokeswoman Ana Bustilloz told the Los Angeles Weekly that the shelter sold about 100 packs of cards merely 24 hours after the the Associated Press piece on the cats was unleashed onto the Internet.

You can buy the artistic notecards at the SPCALA’s website.

Watch a video of the app in action below: