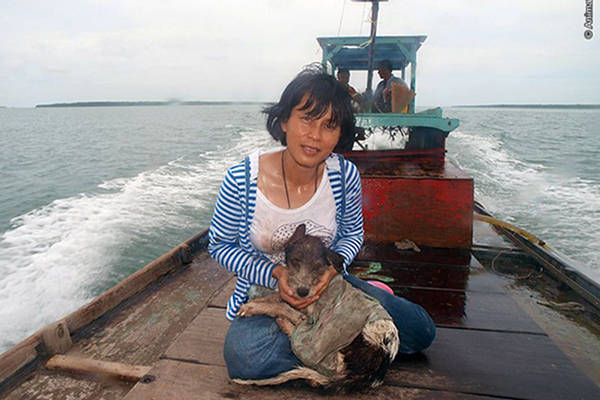 On July 17th, 2012 the world lost Sabrina Yeap, a true savior of dogs in Malaysia, who devoted her life to their care. Sabrina died as a result of leukemia at the age of 49, not knowing of her illness until days before her death. Animals Asia mourns the loss of such a kind-hearted and generous friend to the animals.

Sabrina Yeap’s parents both passed away in a car accident when she was only a month old, leaving Sabrina to be raised in a temple. She had no living family, but played the role of loving caregiver in the lives of the many dogs that she was responsible for as founder of Furry Friends Farm (FFF) – a no-kill animal sanctuary for strays in Rawang, Malaysia. Sabrina also served as a coordinator of the Dr Dog animal therapy program in Malaysia, which sees gentle and affectionate dogs visiting humans in therapeutic settings, ranging from hospitals to orphanages. The program is run by Animals Asia in China and Hong Kong, and launched in Malaysia in 2007 with Yeap serving as the coordinator in that country.

Sabrina was especially known for having rescued many dogs who had been left to fend for themselves on an island by residents of Palau Ketam. This community was frustrated with the strays’ presence in their lives; hungry dogs in the region had taken to biting children. With no support from the government to help the dogs, the people of Palau Ketam had taken 312 of the dogs to the island and left them there. Over the next few weeks as they struggled with the elements and were left to fend for themselves, half of the dogs died of starvation, from being cannibalized by other starving dogs, or from drowning after trying to swim back to Palau Ketam. Sabrina saved many of the dogs. As her boat waited at sea, one truly heroic dog named Kuning guided the other dogs to her from the island where they had been abandoned. Those dogs included Hope, who became a Dr Dog and a wonderful ambassador for his species.

Sabrina’s vision for the Dr Dog program in Malaysia was to introduce mixed-breed dogs to the people of that nation as companions who could give them unconditional love.  The communities Yeap worked with had abused and neglected these dogs’ kin in the past, so she took on quite a challenge with this goal. The stories of her success were legendary—with patients in the various homes she visited gradually accepting and then looking forward to visits from the Dr Dogs that Sabrina brought with her. Says Animals Asia Founder and CEO Dr. med.vet. h.c. Jill Robinson  MBE, “Sabrina was very special indeed – and worked harder than anyone could ever be expected to to create a kinder world for dogs and cats in Malaysia.”

In time, Sabrina and her team’s steps to change the image of dogs in Malaysian communities led to a shift in how the population viewed and treated dogs. They began to see them not as lesser beings to be disparaged, but as companions capable of giving and receiving love.

Today the program in Malaysia that Sabrina Yeap initiated and drove sees canine ambassadors visit a variety of facilities, including an autism center treating children under the age of 10.

In addition to many Dr Dog visits, Sabrina and her team successfully held charity drives in Selangor and coordinated a “Walk for Harmony” in Malaysia. “Walk for Harmony” is a fundraising event that sees people and dogs join together for a unified walk promoting a message of love between humans and animals.

In addition to ushering the Dr Dog program into Malaysia, and rescuing many strays, one of Sabrina’s great accomplishments was saving Jasper—a dog who was the victim of a terrible hit-and-run car accident. Jasper was discovered by some of Sabrina’s friends under a car, with injuries including a broken skull. When Sabrina came to care for him, she said that he wagged his tail as if he knew that help had finally arrived. With the help of a local veterinarian, Jasper soon recovered, and went on to live a healthy and happy life.

Sabrina Yeap set a new standard of respect for companion animals in Malaysia. Through hands on rescue and care, education, and activism Yeap saved many sweet lives and dramatically improved many more. A committee has been formed to determine how best to continue her tireless work.

Sabrina Yeap’s memorial service was held on July 18th, 2012 and her cremation, led by a proud procession of Dr Dogs, took place on July 20th. Her ashes will be spread on the Melaka Straits as per her wishes. She is survived by many loyal friends: canine, feline and human.