This startling infographic highlights how Americans consume an average of 200 pounds of meat, 31 pounds of cheese, 16 pounds of fish, and 415 pounds of veggies on an annual basis. Wondering how this compares to what we were eating in the 1950s? "> American Food Consumption Statistics (Infographic) - One Green Planet
Food Monster App Tiny Rescue Shop Newsletter Support Us Cookbooks Petitions

This startling infographic highlights how Americans consume an average of 200 pounds of meat, 31 pounds of cheese, 16 pounds of fish, and 415 pounds of veggies on an annual basis.

How does this compare to what we were eating in the 1950s?

In the 1950s, the meat and poultry consumed per person on average was 138 lbs a year, which means that meat consumption has increased by around 45 percent over the past 60 years. Cheese consumption in the 1950s was only around 7.7 lbs, while today, Americans consume around 30 lbs of cheese a year. What’s even more startling is that in the 1950s Americans consumed no high fructose corn syrup, but we now consume around 42 lbs on average on an annual basis.

It should come as no surprise to anyone that in the 1950s, only 9.7 percent of American adults were considered to be clinically obese, but today, the United States leads the world with an obesity rate of over 30 percent. Moreover, despite being the richest country in the world, Americans are the least healthy people among the world’s developed nations.

According to the National Institute of Health 80-90 percent of all degenerative diseases (arthritis, Alzheimer’s, cancer, heart disease, diabetes, etc.) are due to environment and lifestyle and are PREVENTABLE. If we want to reverse this trend, a great place to start would be to work on changing some of the statistics below by cutting back on our consumption of disease promoting animal-derived fats and protein, along with refined sugars.

You don’t need to be a nutrition expert to figure out how much healthier these statistics would look if the infographic was only focused on the average American VEGAN! 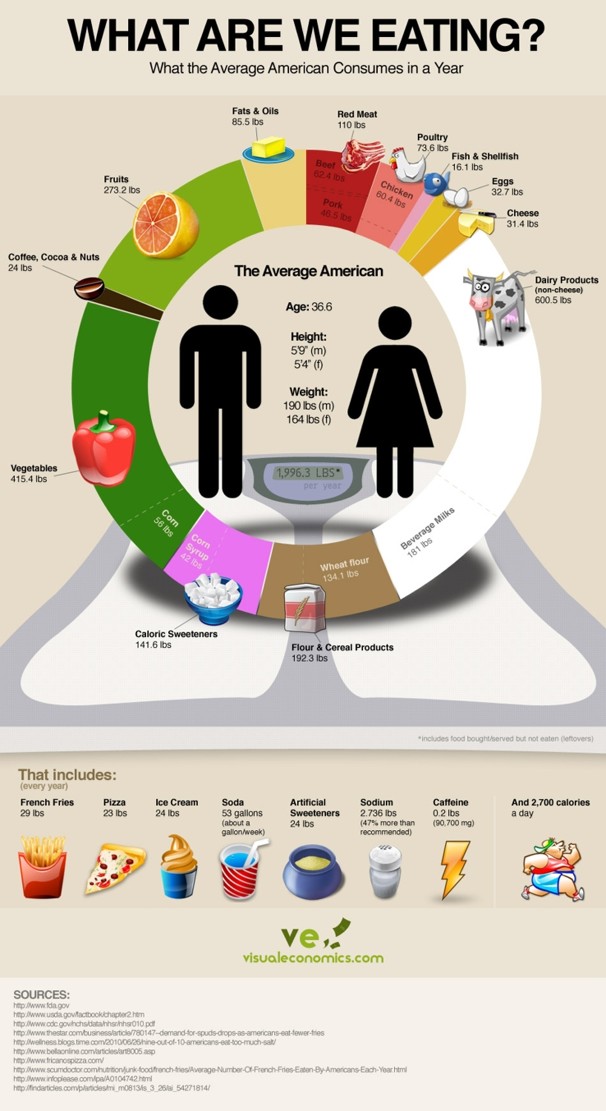