WHOLE Foods for a WHOLEsome Life… 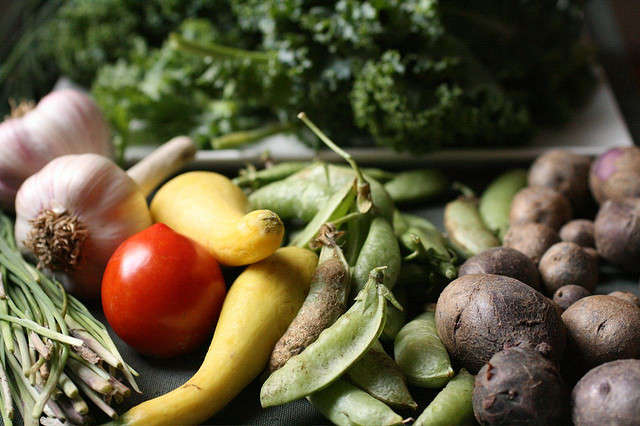 Do you know the difference between a WHOLE food and a processed food?

Don’t feel badly if you don’t. Most people are baffled by this concept. In fact, many folks I encounter believe they’re eating a diet mainly comprised of whole foods, when the majority of their food intake is indeed processed.

For instance, did you know that bread is a processed food? Yes, the highly touted “staple” food group is processed due to it’s ingredients such as flour, salt and enriched nutrients. In fact, bread’s known to be one of the highest sources of sodium consumed in the American diet.

Take a look at this processed vegan meal (A) compared to it’s essentially non-processed alternative (B):

A. Frozen Boca Burger with Daiya cheese and Vegenaise on a gluten-free bun with Naked Juice and a bag of “veggie” chips.

By eating more meals like the latter, you can significantly reduce the amount of processed ingredients you consume.

So what makes a whole food WHOLE?

The Academy of Nutrition and Dietetics (previously The American Dietetic Association) defines “Whole foods” as generally refering to foods that are not processed or refined and do not have any added ingredients. By most definitions, whole foods include fresh produce, dairy, whole grains, meat and fish — food that appears in its most pure form with minimal processing.

An apple is a whole food. Purely mashed apples into applesauce is lightly processed because the fiber is still intact but it’s composition has been altered. Commercialized juice is liquified, stripped of it’s nutrients during processing and often contains added sugars and preservatives.

Another way to determine a whole food is to ask yourself, “how would this food appear in the wild?” If you picked an olive from a Greek olive tree – it would be a WHOLE food. Once that olive is pickled and preserved with large amounts of sodium, the processing has begun. Once the (processed) oil is extracted from the (whole) olive, it is a refined food that has lost much of it’s nutritive value. Olive oil is composed of 120 fat calories per 1 Tbsp. with minimal micronutrients (vitamins, minerals) remaining. Therefore, it often qualifies as a processed food.

Processed ingredients typically lack micronutrients while containing significant amounts of oil, salt, sugar or flour and can be located in the center aisles of your grocery store. You won’t find as many processed foods within fresh or frozen produce, but you should always read the label. It’s amazing what manufacturer’s sneak into “food” these days! Remember, processed goods abound in boxed convenience foods, both frozen and held at room temperature, so limit these items.

1. Processed foods are macronutrient rich and micronutrient poor. This means they contain ample amounts of carb, fat and protein – but inadequate amounts of vitamin, minerals, antioxidants and phytochemicals naturally. These foods may be fortified with synthetic and/or isolated nutrients such as iron, folic acid, calcium, vitamin D and B vitamins – but studies indicate that isolated nutrients are less absorbed than when they are consumed intact in their original packaging with a symphony of nutrients, phytochemicals fiber and water – all working together synergistically. As a result, the fortified nutrients are less effective. Over time, a chronic reduction in micronutrients may promote inflammation in the body which may contribute to disease.

2. Processed ingredients such as salt, flour, sugar and oil are highly addictive ingredients. In fact, the science on food addiction has established that highly desirable foods (low-nutrient, high-calorie, intensely sweet, salty, and/or fatty making up the majority of the Standard American Diet) produces the same biochemical effects in the brain that reflect qualities of substance abuse. These characteristics include 1) compulsive use, 2) tolerance over time, 3) withdrawal symptoms and 4) activation of reward pathways (such as the dopamine system) in the brain.

Many Americans are food addicts without knowing it and realizing the ramifications of their daily food choices. It’s a viscous cycle of consuming cheap tasty food that is processed and nutrient poor, which contributes to an unquenchable hunger, which leads to weight gain, which leads to fat storage, fatigue, inflammation and health problems. Left unaddressed, these habits have festered into 133 million Americans (that’s 1 in 2) with at least one chronic disease today. As with any substance abuse, the key to recovery is total elimination of processed food triggers.

3. Processed foods take over your palate AND your plate. Anytime processed foods consume your plate, there’s that much less room for WHOLE foods on your plate. As a result, healthy foods get pushed aside because they lack the tasty qualities that fat, sugar, salt and oil bring to your tongue and the table. The more these processed foods are consumed, the more desensitized our palate becomes from excess sodium and sugar. In order to enjoy foods in their whole, natural state – the processed foods must be removed to enable a “cleansing” of the palate and a chance to appreciate the taste of real food.

What are specific examples of processed foods verses whole foods?

In order to nourish your body with nutrient-rich meals, make it your goal to fill your plate with as many WHOLE foods as possible for a WHOLEsome life. :)