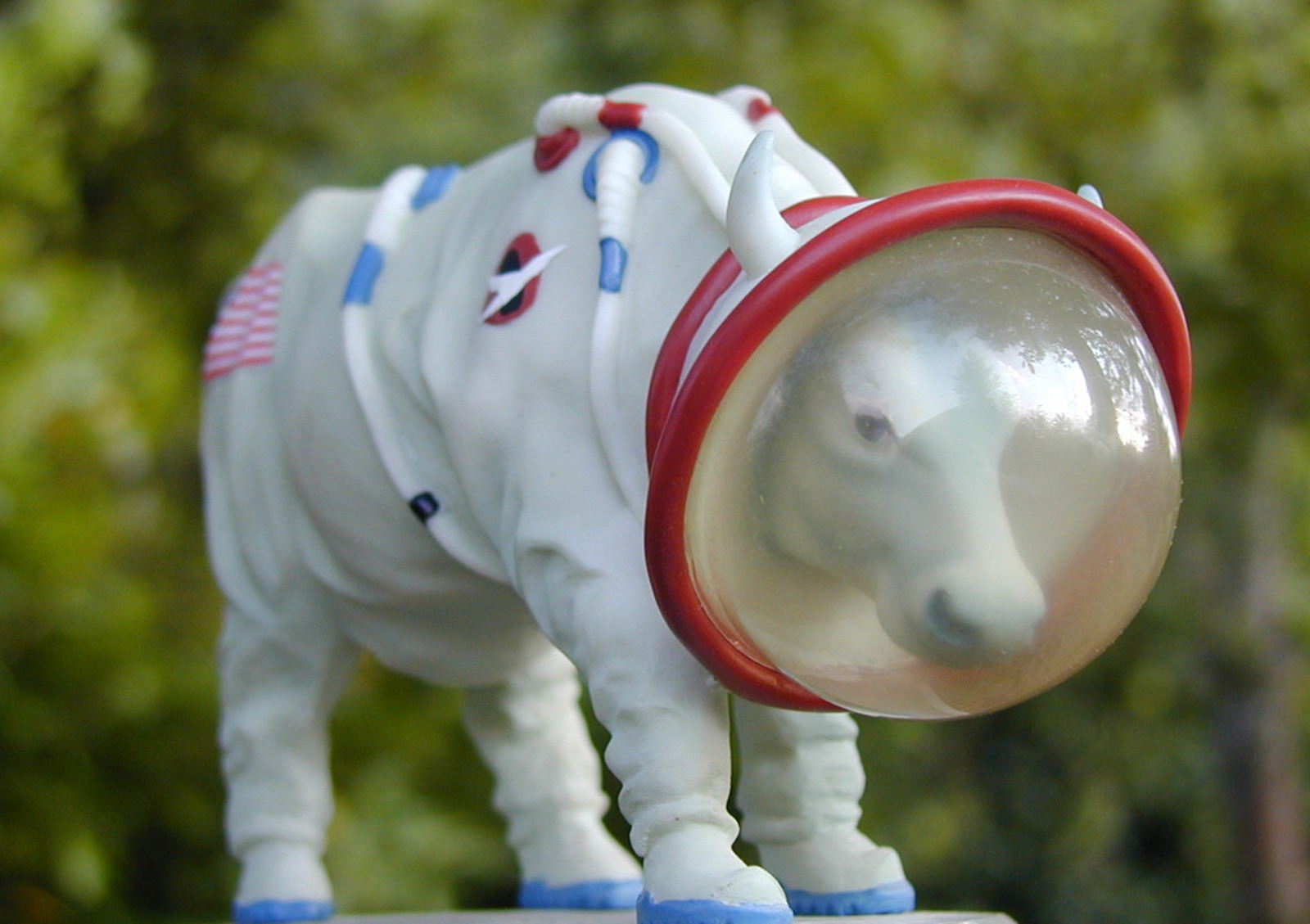 As my favourite 90’s TV show FBI detective Fox Mulder of The X-Files would have said, “The Truth is Out There.” Given, he was talking the existence of little green men, UFOs, and other wacky paranormal antics, but the fact remains that this mantra has stuck with me: if you want to know the truth, you’ve got to go looking for it. And sometimes, for reasons we’ve often yet to fully fathom, the truth is carefully and craftily hidden from the general public and in its place a thoughtful and comforting lie waits for us.

Some industries are so skillful at covering up the menacing underbelly of their operations that anyone who challenges it is immediately branded a stranger, a fool, a few grapes short of a fruit salad, if you catch my drift. One industry in particular I think clandestine organizations should be taking notes from on how to deceive, inveigle, and obfuscate is… the dairy industry. Of all the agricultural industries in the world, the dairy industry has perfected the art of myth. Check out five of some of their best works, and how we might go about debunking them.

1. “Milk is the healthiest source of calcium.”

Milk — it’s almost become a synonymous term with calcium for some. Rudimentary food guides from the 1990’s all the way up to 2010 would have shown you about four different and essential food groups: meat, grains, fruits and vegetables, and dairy. You were advised to get meat for protein, as it was considered the only source of “really good” protein, and milk for calcium, the “only good” source of calcium. I remember in elementary and middle school, we never learned about what sort of essential vitamins were derived from each of the different fruits and vegetables. At best, oranges and vitamin C might have been brought up. No, the real focus was protein and calcium. And what better way to get calcium than the only acknowledged source of calcium, cow’s milk? Who could disagree with that sound logic?

The Harvard School of Public Health could disagree with it, actually, claiming that “Calcium is important. But milk isn’t the only, or even best, source.” Harvard scientists like pediatrician David Ludwig have suggested that dairy consumption should be limited while other calcium rich foods — particularly green, leafy vegetables — be embraced. They cite dairy’s high saturated fat content, increased risk of ovarian cancer and increased risk of prostate cancer as well as lactose intolerance as some reasons why non-dairy calcium sources should become more prevalent in our grocery lists.

Despite this, dairy companies and obnoxiously ubiquitous “Got Milk?” ads will continue to advertise cow’s milk as the number one source of calcium, acknowledging absolutely no other source of calcium and even neglecting to mention possible downsides of a diet rich in dairy products. And we buy it. “Fat free” dairy products like yogurt and milk-based smoothies are extremely common items among diet, weight loss, and “healthy” living communities.

2. “Dairy cows are treated well and slaughter is not an active part of producing milk.”

But, you know, who cares if milk isn’t the healthiest thing on the planet? “You only live once,” “my body, my choice,” and “it doesn’t hurt anybody else, does it”?

However, you’re not the only one who only lives once: behind every decision to consume dairy is a mother cow and her baby calves. Mercy For Animals has conducted numerous undercover investigations finding that dairy cows are frequently abused — “every one of these investigations has led to criminal charges and convictions against workers who were caught on video maliciously abusing animals,” as MFA has reported.

Cut tails, horns burned, hitting, kicking, and painfully shocking, stabbed, beaten, and punched — the life of the average commercial dairy cow is not a pleasant one. According to Kind Lifer Alicia Silverstone, the same life can be said of supposedly “organic” dairy cows as well.

If this were the only problem, perhaps we would be warranted in trying to reform the dairy industry, to implement animal welfare laws that prevent the extreme abuse of dairy cows. But the fact remains that to produce dairy, a cow must be inseminated. She must produce a child in order to lactate, and her child must not take that milk away from those who intend to profit from its sales. And so, the dairy industry becomes the leading contributor of the veal industry in which male calves are taken from their mothers, trapped in small crates, and slaughtered usually within the first year of their life. It is a gruesome necessity of making cow’s milk for human participants, and one of the many reasons why even “humane” dairy requires the death and exploitation of millions of cows.

Also, last I checked, a cow’s body was not my body. Is it really my choice how they live and die, all because I want a glass of milk?

Even if cow’s milk isn’t the healthiest source of calcium, it still aids in the prevention of osteoporosis and the deterioration of bones, right? Unfortunately we have some conflicting data that the dairy industry isn’t too keen on telling you and I, and it’s that bone fracture rates tend to be lower in countries that do not regularly consume milk, compared with those that do. An inverse pattern can be seen where countries with the highest overall dairy consumption also experience the highest rates of osteoporosis and bone fractures.

4. “You can be an environmentalist and drink dairy.”

Maybe your life goals aren’t about your health or the treatment of dairy cows. These are small matters that will be washed away in the sands of time, you say: the real concern is the overall health of our planet, mother Earth! A dyed-in-the-wool eco-friendly tree-hugger, you do your best for our planet at all costs. But you may not have known – and of course, your friendly neighborhood dairy company didn’t tell you — that it’ll take more than just recycling your yogurt container to really do justice to the planet. Dairy cows produce about 120 pounds of waste each day, the equivalent of two dozen people or more. Most of this waste goes untreated.

According to research by Cornell University scientist David Pimentel, it takes about 14 calories of fossil-fuel energy to produce one calorie of milk protein on a conventional farm. By comparison, Pimentel’s data suggest that it takes about 0.26 calories of fossil fuel to make a calorie of organic soybeans — which are used by most soy milk manufacturers. Soy protein accounts for about 35 percent of those calories, so let’s say you’ll need to put 0.75 calories of energy into farming soy to produce a calorie of protein. That makes soy protein approximately 13 times more energy-efficient than even organic dairy protein under a best-case scenario.

On top of all of this, a single cow may produce up to 1/3 pound of methane every day, and take along with other animal agriculture take up to 30 percent of the Earth’s surface to maintain, causing soil erosion and desertification in the process.

Last but certainly not least, the dairy industry tells us that, yeah, even if milk has it’s flaws, it’s delicious: how else are you going to make ice cream? Yogurt? Cheese? Do you really think you could give up the almighty CHEESE?

Just when they think they’ve got you, dairy free alternatives to every cow’s milk based substance rush to the rescue. Though the dairy industry has tried to put the heat on non-dairy milk products by saying they aren’t “real” and they contain “weird” ingredients (all of those spooky almonds and crazy coconuts! As if added growth hormones weren’t a little odd?), cruelty free, environmentally friendly, healthy non-dairy beverages and snacks aren’t ready to give up just yet.

With so many options to choose from, including soy, rice, almond, hemp, coconut, and even flax, you’ll be ready to satisfy any of your cravings in no time, whether you’re a huge fan of grilled cheese or an avid ice cream connoisseur. I know a little tub of dairy free mud pie ice cream gets me through the end of a hard day full of messy milk myths and deceitful dairy disasters.