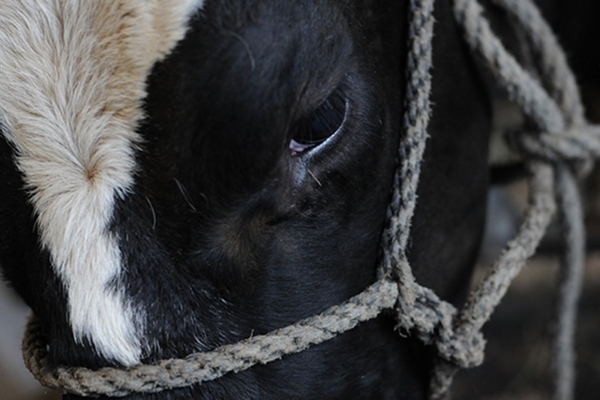 Collectively speaking we are slowly facing the truth about animal industries - a topic that is darkly shadowed and generally hidden from our view. To quote Maude Barlow, an important environmental activist, “The rights of animals is the next frontier in the search for both justice and environmental sanity.""> Vegan Consciousness: Reflections of a New Vegan - One Green Planet
Food Monster App Tiny Rescue Shop Newsletter Support Us Cookbooks Petitions

I have been vegan for just over two months, and I love it. Contrary to what many people think, it’s not hard and I definitely feel healthier. It happened for me in stages over a 23-year span. I was burgeoning, imperfect, on again – off again. Technically, I was a vegetarian but I generally shopped, cooked and ate like a vegan. The firm principled step to veganism is a hugely significant one. In fact, I would argue that the change is equivalent to a meat eater becoming a vegetarian. I mention all of the above because I think my journey actually represents a common one. There are many vegetarians who genuinely grapple with veganism. It seems extreme, or it is perceived as inconvenient and difficult. In my experience a consciousness shift is required to galvanize the transition.

Increasingly and thankfully there are monumental books and movies being consumed by popular culture about animal cruelty and about the health and environmental benefits of a vegan lifestyle. Collectively speaking we are slowly facing the truth about animal industries – a topic that is darkly shadowed and generally hidden from our view. To quote Maude Barlow, an important environmental activist and the subject of my last film Water On The Table, “The rights of animals is the next frontier in the search for both justice and environmental sanity.”

My own shift towards a vegan consciousness is hinged on two recent events — both are due to meaningful connections with animals. It will seem obvious to many readers but acquiring a ‘vegan consciousness’ is foreign to most. When my 16 ¾ year old dog Troy died in my arms I vowed to no longer contribute to the system that uses animals. I made a deeper connection (I felt it): Troy and a dairy cow and an egg-laying hen are all sentient creatures deserving of a good life. It has since become obvious to me that the free range and organic industries that produce dairy and eggs are just a cog in the larger pervasive system that regard food animals as things for human consumption.

The second significant event happened this past July, I met “Fanny Fantasma”, a rescued “spent” dairy cow, and “Sonny Sanctus”, a rescued baby veal bull, in upstate New York. I spent many quiet moments filming intimate close ups, looking into their eyes, and connecting with them. I was at Farm Sanctuary with animal rights photographer Jo-Anne McArthur, who is the main subject of my current film The Ghosts In Our Machine, and with my fellow producer Nina Beveridge. We filmed with the unstoppable Susie Coston, Farm Sanctuary’s National Shelter Director, moments after she rescued Fanny and Sonny from a country auction. They were “downed” and of no value and therefore destined for a rendering plant. They were unable to stand up, sick, dehydrated and exhausted and in need of medical care. Susie saved their lives. We filmed Fanny and Sonny en route to Cornell University and we filmed at the University for two days: the vets and technicians tending to them with ultrasounds, blood work and medical assessments. How often do you see a farm animal being treated with the same regard as a dog or cat at the vet? It is rare of course because their worth is not measured in the same terms. After some uncertainty their story takes a happy turn, both Fanny and Sonny are well enough to be discharged to Farm Sanctuary, and we follow that process. Sonny is placed in close quarters to the staff and medical area; he is very vulnerable and needs to be closely watched. It is estimated that Sonny is 1-3 days old, and like most if not all calves born into the dairy industry, he was taken from his mother and is missing the necessary antibodies to build his immunity. Fanny is given a comfortable area in the special needs barn where she has access to the pasture, other cows, fresh hay and most importantly, freedom from the dairy industry. It is estimated that Fanny is three years old, and due to her deformed hooves and obvious discomfort while standing, she probably spent her life producing milk standing on concrete. She prefers to lie down.

Some of these detailed and intimate moments are featured in the most recent trailer for The Ghosts In Our Machine. It is commissioned by CBC’s documentary for an upcoming feature film. The rescue and rehabilitation of Fanny and Sonny is just one of the main stories the film will capture over the course of the next year as we gear up for our production phase. We will return to Farm Sanctuary to follow up with Fanny and Sonny, to get to know them as individuals. “Fantasma” means “Ghost” in Italian, and “Sanctus” means “Holy Spirit” in Latin. They are two individuals representing billions of ghosts in the machine of our modern world. Their stories will hopefully touch the hearts of many people.

Troy helped me to see that animals are deeply unique beings capable of love and humor, pleasure and pain, and my conclusion is that all species deserve our respect. Fanny and Sonny are forever symbols for me of what the dairy industry represents. Being vegan means that each day, at each meal, and as a consumer, I support a different system, and in the words of another important environmental activist, Arundhati Roy: “Another world is possible”.