7 Tricks for Keeping the Greenhouse Warm Without Using Electricity 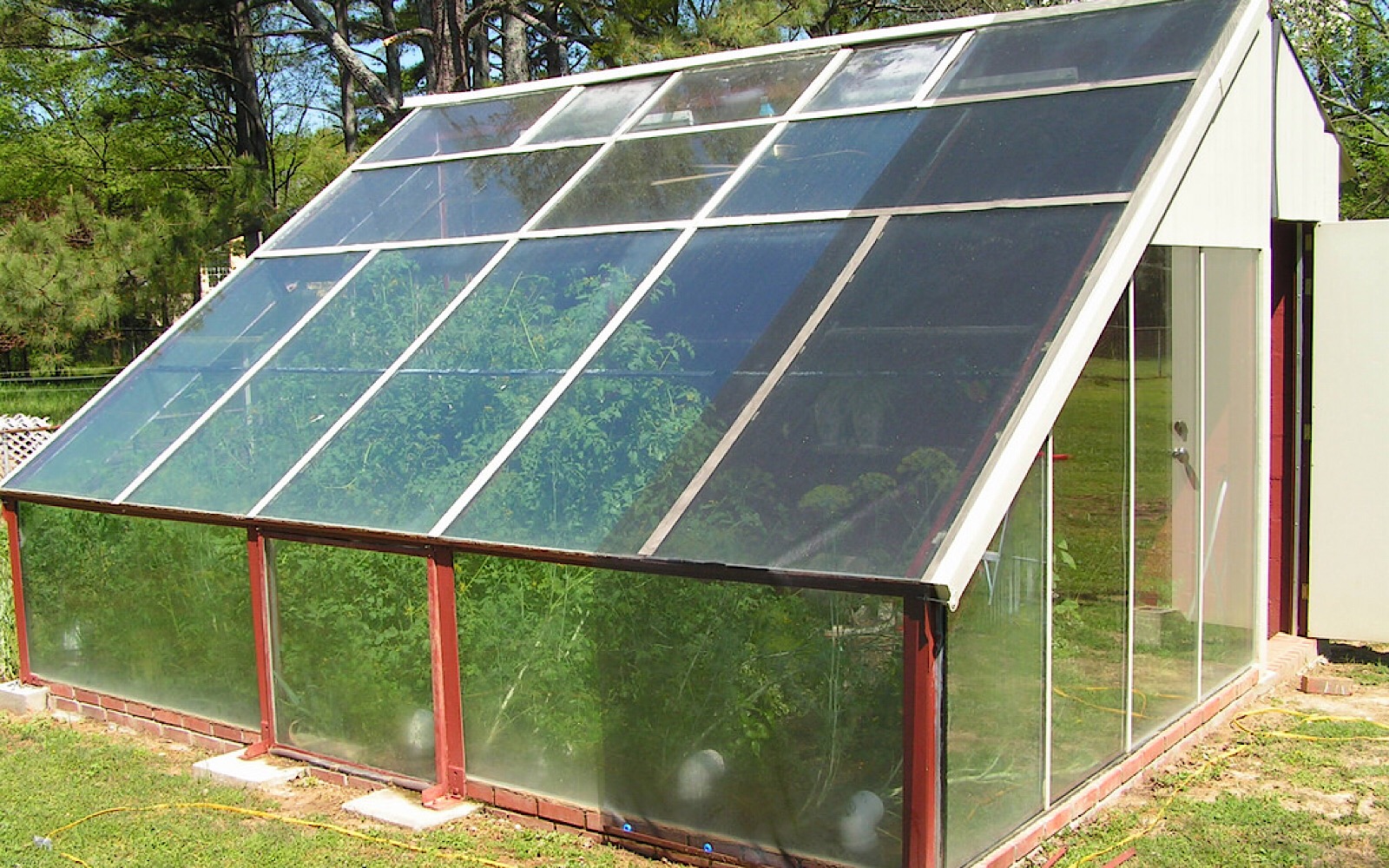 The thought of having a greenhouse is a bit intimidating for some people. Isn’t it already tough enough to pay the power bills? Now, the plants need their own house to stay warm, too! Luckily, with a little know-how, it’s possible to design and keep a greenhouse reasonably warm without using any electricity at all. It might not be roasting and toasting, but it’ll keep temperatures above freezing and keep the wind off the plants.

The number one trick to heating a greenhouse without power is taking advantage of the sun. The sun is free energy, and it works day in and day out. However, there are times when it’s cloudy, not to mention that the hours of sunlight are reduced in winter. Luckily, there are several ways to naturally help heat up the greenhouse, as well as design wisely to make the most of the heat that’s around anyway.

1. Make Compost in Your Greenhouse

Every gardener at one time or another has seen it. We start digging in the compost pile, and that thing is literally smoking hot. A good compost pile will get well above 100 degrees Fahrenheit, and it can stay there for a while, particularly if it is regularly turned to add oxygen. In other words, compost will naturally put out heat that can warm the greenhouse. Having paths made from (dark) wood mulch and mulching the beds will add to this heating by decomposition.

When trying to passively heat with solar energy, thermal mass is crucial. Some objects, rocks, clay, and bricks, absorb heat when air is warm and release it when air is cold. Water also has good thermal mass. To heat for free, we’ve got to take advantage of thermal mass. It’s wise to make raised beds with stone or brick walls to absorb the heat. It’s a good idea to put some black barrels or water around as well.

3. Double Up on the Windows 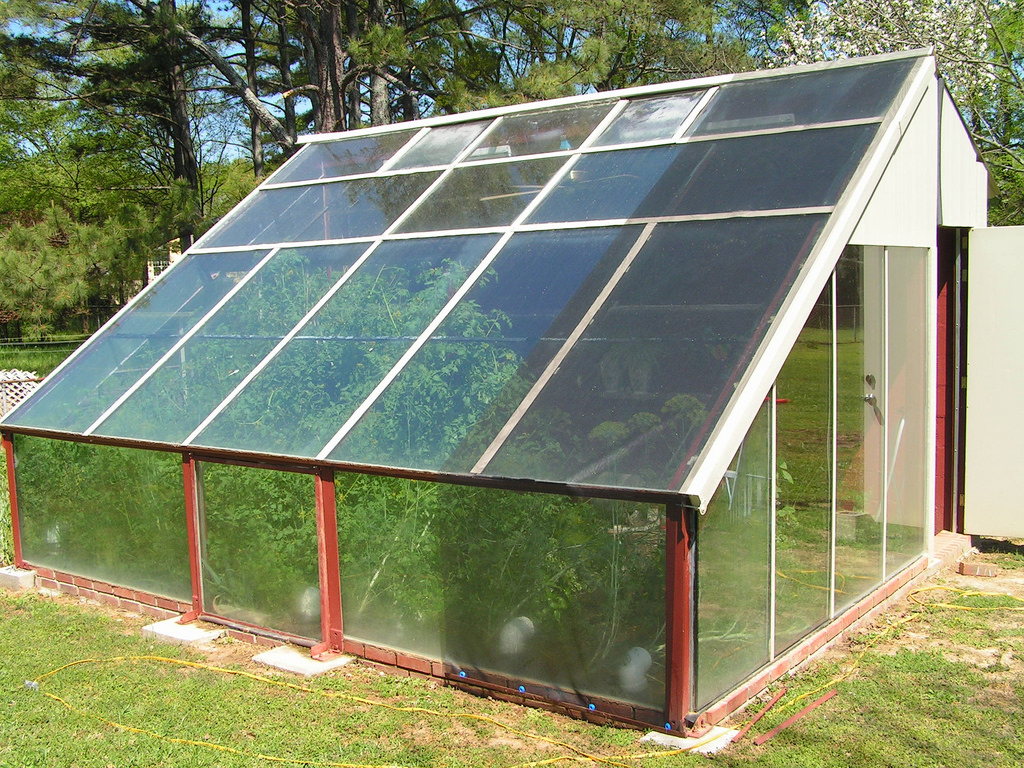 In places where times get seriously cold, it’s code that our homes have double-pane windows. That’s because they are much more energy-efficient, allowing warmth from the sun to come in during the day and prevent heat loss due to cold temperatures outside. While it’s probably too costly for most people to use double-pane windows for a greenhouse, it might not be a bad idea to add a layer of (repurposed) clear plastic to create a double-pane effect. This will help to seal the greenhouse as well, but a little caulk here and there wouldn’t hurt either.

4. Insulate the North Side

For those of us who live in the Northern Hemisphere, there is no point in having the north side of our greenhouse be glass. The sun never shines from the northern side, so it makes a lot more sense to insulate that side, which will prevent some heat loss from inside and thwart the frigid north winds from seeping in from outside. Plus, we could put some of our thermal mass heating back against that wall to absorb more sunshine.

5. Reflect the Sun’s Light and Heat 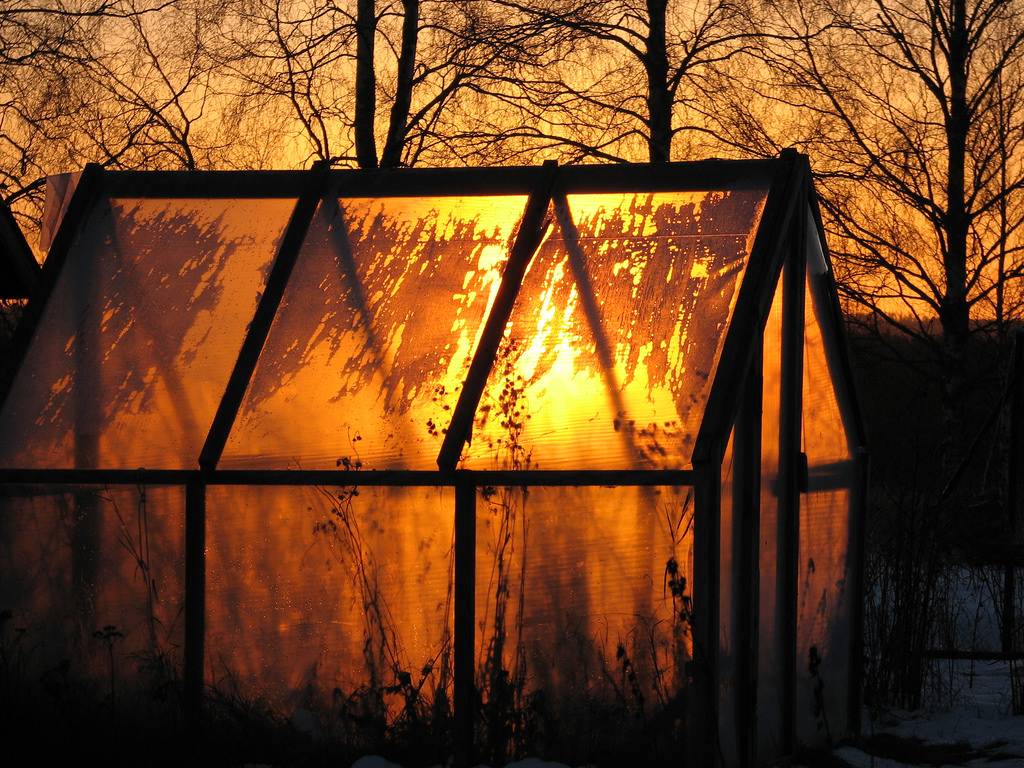 To add to the effectiveness of the insulated northern wall in the greenhouse, it is a good idea to have the (south-facing) interior of it be painted white or covered with a reflective material like tin. The sun will bounce off this wall and into the garden beds, providing the plants — at least in the daytime — with more sun rays and warmth.

While most of us think of basements as dingy, cold places, the truth is that underground is often warmer than above ground in the winter. The deeper into the earth we go, the more constant the temperature becomes, and the consistency is always above freezing. So, it’s not a bad idea to sink the floor of the greenhouse to below the frostline; that way the warmer earth can help to moderate the temperature inside, and in the garden beds particularly.

As long as we are into making compost in the greenhouse, heating thermal mass barrels of water, constructing thermal mass raised beds, reflecting sunlight from the insulated north wall, and sinking the greenhouse into middle earth, it might be worth installing some solar water heating pipes on a closed loop to pump through the garden beds. These pipes can be coiled in the middle of the compost heap so that the warmth from it will heat the water, which can move through the pipes and heat the soil from within the garden beds.

By no means will these methods entirely replace a powered greenhouse kept at tropical temperatures, but they can keep a space warm enough for plants suited to temperate climates, likely several USDA zones warmer. Plus, a greenhouse like this will keep cold-hardy greens and vegetables growing all winter long, and once it’s up, it doesn’t cost a thing to keep warm.