A Beautiful World: Moving From Despair to Hope 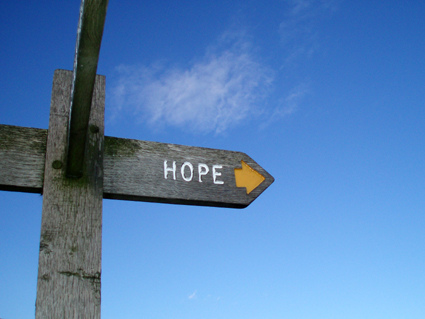 Waking up to the horror of what is happening to animals can be experienced as a terrible burden. Whenever we reach someone with this message, we are so pleased, and then for a moment it dawns on us that we might be ruining their life, at least temporarily.

For the few who are willing to take in the full breadth of the pain humans inflict upon animals, the world can sometimes seem like a very, very dark place. Mariann used to wake up to the horror literally, in the middle of the night, haunted by thoughts of pigs going to slaughter, right at that moment, imagining their fear and their pain and the sheer number of them. That doesn’t happen very often anymore – perhaps she just adjusted. But still, we, like everyone who has awakened, know far too much.

Of course, there are compensations. One is the people. We feel like we live in a community that reaches around the world, made up of all those who get it about animals. It’s kind of like a family, in fact. Some of them we like, some of them maybe not so much. Which is also like a family. But they are our people. Our unity with them crosses ethnicity, nationality, gender, age, everything. We love them. Have you ever noticed how vegans hug? We don’t shake hands. We hug hello, even at first meetings. We are bonded. In fact, we feel we have more in common with them, in so many ways, than we do with some members of our own families. Sometimes this helps compensate for the sadness we feel when we see people we have loved our whole life eating animals. Or when we see young children whose birth we had celebrated munching on a pork chop, unaware of what they are doing. And there is also the compensation of living the truth. It’s hard to articulate why this is a good thing, but we know it is because we would not go back to our old ways, our blind complicity in this horror, for anything on earth. But the greatest compensation, perhaps, in knowing what is happening to animals, is the awareness that there is hope for the future. And we don’t just mean the future for animals. We mean the future for everything on earth. That sounds ridiculous, we know.

When 99% of the human race seems completely oblivious to the enormity of suffering they are causing, how can we have any hope at all? Because the fact is that most people’s beliefs about animals are completely out of sync with their behavior. We all know that. Most people profess to love animals. Most people understand that animals, with all of their variations, experience the world just like we do, one by one. And they’re not kidding. When confronted with an animal, they don’t actually want to kill him or hurt her. If they decide to kill him or participate in her death because of necessity, or, more likely, some selfish reason or just by habit, they are careful to construct a theory, no matter how outlandish, explaining why it’s the right thing to do. They need that theory and they need to believe it, because cognitive dissonance, i.e., holding two competing ideas at the same time, is unbearably uncomfortable, and one of the ways to make it less uncomfortable is to indulge in denial, no matter how dishonest. And, since everyone around them is doing the same thing, and relying on the same theory, they remain pretty comfortable. But the extreme contrast between what people feel and what people do when it comes to animals has only been able to stand because the voices on the side of the animals have been so soft, so few. As each of us is added to that chorus, as each of us speaks up, the dissonance between the voices of truth and the voices of denial becomes harder and harder to maintain.

This massive shift in consciousness is going to happen. We get closer every day. And the other fact is that once people stop trying to find theories about why it is okay to hurt animals, their connection to animals – to individual animals, to species of animals, to all the conscious inhabitants of this small precious sphere in the middle of a limitless universe – is the one thing that can save us. It’s the only way forward. As vegans everywhere know, animal consciousness is something that brings us together. And it does so without displacing all of the many belief systems that divide us. You can believe that we evolved from the primordial ooze or believe that God put us here a few thousand years ago. You can love your country or hate the whole concept of nations. You can embrace whatever moral theory you want. The awareness that we are all part of this intricate, beautiful web of conscious life makes us realize that we are the same. Makes us realize that we have responsibilities. That we are a family. And that we live in a beautiful world. Image Source: Pol Sifter/Flickr