Fires Caused by Deforestation Are Killing People and Animals in Sumatra 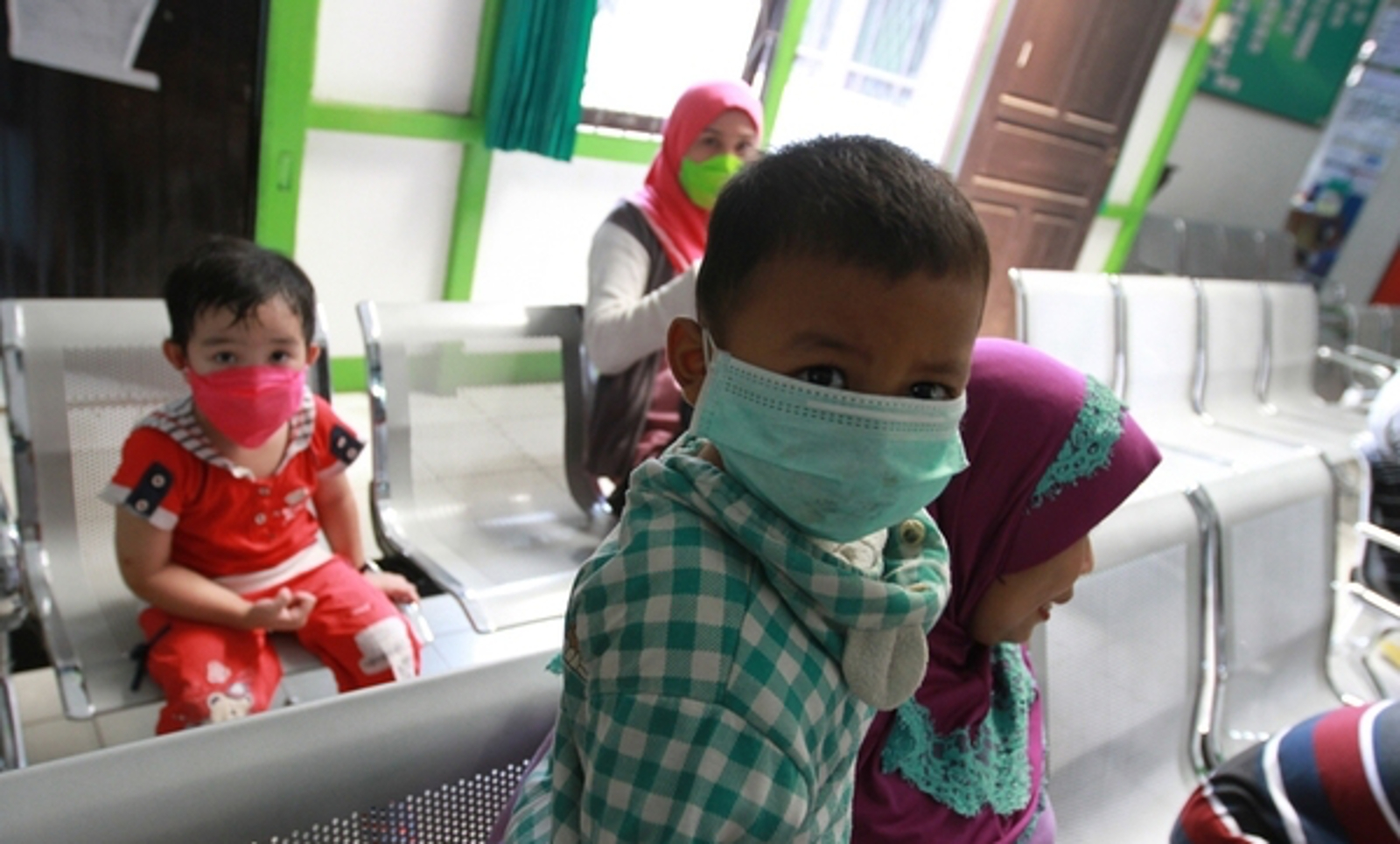 This post was originally published on Greenpeace International’s blog, here.

I flew from Jakarta and landed in the city of Pontianak, the capital of West Kalimantan, in Indonesia, in the middle of a hot and humid September. I was lucky. My flight was only slightly delayed but there were other flights that were held back for hours. Others were just outright cancelled.

By mid-September the haze was getting thicker, creeping up like a virus about to envelope the city. During the mornings visibility reached out to only about 50 meters; more than 12 students aged between 15-17 at a vocational school fainted, unable to breathe properly; and the Air Pollution Index (API) reportedly passed 1,000 (PM10) making Pontianak effectively the most polluted city in all of Indonesia. 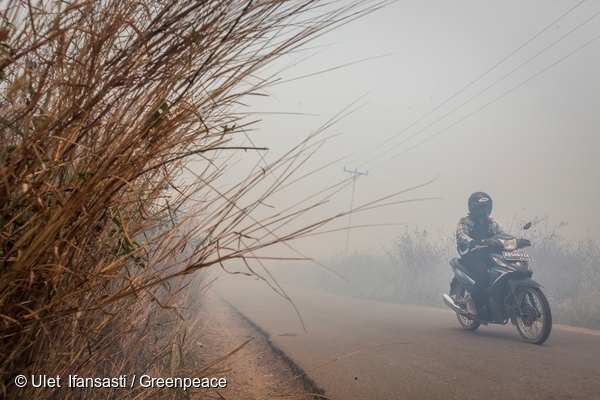 As a Greenpeace campaigner, I was in Pontianak to measure various data compared to other “hot spot” provinces like Riau, South Sumatra and Jambi. Previously, the fires raged fiercely on the Sumatran side, but now the fires were steadily rising across on the Borneo side. So what had changed? Where were the fires coming from? And where was the government effort to relieve the damage?

The Impact of the Smog

Arriving in Pontianak, the smell of burning wood instantly hit; the sky so grey I could barely see more than 50 meters out in front of me. But as I quickly put on my mask I realized most locals were freely walking around without protection.

Moko, a 36-year-old local driver who I hired to take me around the city asked, “How bad is the haze?”

“Hazardous,” I replied. “It can affect your lungs.” 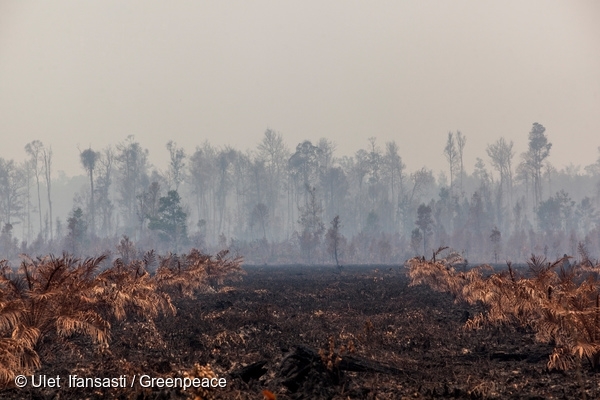 Suddenly, he began opening up about his one year and nine-month-old daughter, Alia. She had been coughing for days and her breathing was like a heavy snore.

In Pontianak, local information about the impacts of the haze was hard to come by. I wanted to know more. Feeling Moko’s concern, I asked him to accompany me to meet Dr Nursyam Ibrahim, the Vice President of the Indonesian Medical Association in West Borneo, and asked whether Alia’s respiratory problems were due to the bad air quality.

“Her phlegm production is going overdrive. Every second there might be a large deposit of phlegm. That explains the whizzing noise,” said Dr Ibrahim. 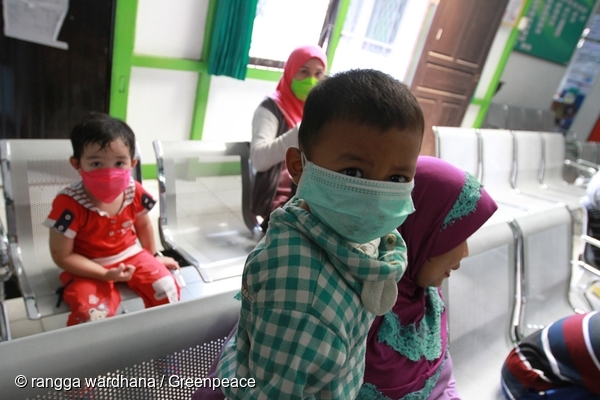 He went on to explain that the most high-risk groups who might suffer from poor air quality are babies, toddlers, kids, pregnant women and the elderly – all three times more likely to experience disastrous consequences than those not within the groups.

“Short-term effects, like difficulty in breathing and wheezing, can be felt within two months. But long-term effects could result in death from brain damage because of anoxia,” said Dr Ibrahim.

Last year, more than 30,000 people suffered from respiratory problems on Sumatra island, as well as other illnesses such as pneumonia, asthma and eye and skin irritations. But this year, the problem seems to be much worse. The onset of El Nino means conditions are extra dry, fanning the flames out to Singapore and Malaysia and raising the API alarm to dangerous, and even hazardous levels. But the haze itself isn’t actually dangerous to humans. Rather it’s the pollutant particles coming from the forest and peatland fires, and since the particles are way more complex, the side effects could be even worse than cigarette smoke.

“Continuous exposure will be seen in the next generation where some components in the bodies will be forced to adapt to be more resistant to haze,” said Dr Ibrahim. “Then there’s the mental health impact. Emotional stress levels will heighten and there could be an increase in illnesses like depression.”

“Socially, we could see a lot more ‘horizontal conflict,’ making people more sensitive. This impact on our behavior to each other – we haven’t thought about deeply yet,” he added. “Doctors and medical practitioners can only help to heal and that’s it. It would be draining for the country’s financial resources. It’s much cheaper to prevent this.” 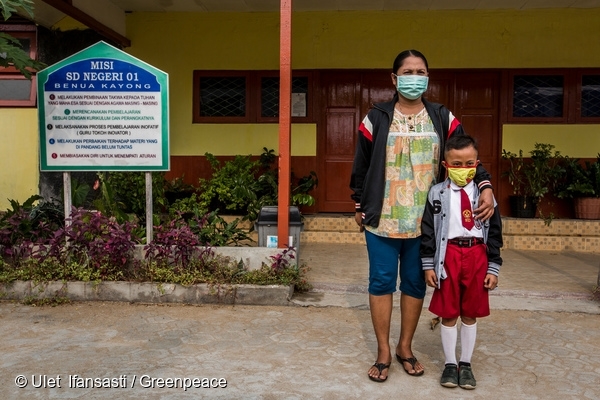 Last August 2015, West Kalimantan’s Department of Health data showed a number of patients with acute respiratory infections. It’s clear that we are facing the worst year of fires threatening people and the environment – long term  seasonal exposure to smoke particles could result in an average of 110,000 deaths a year, plus it’s impacting Indonesia’s beloved orangutans and the annual migratory bird season. Yet the government refuses to declare this a national disaster.

I look at Moko who has been staying silent during this discussion. He called his wife and I overheard him mentioning Alia’s name a few times. My mind travelled to Solok, West Sumatra, where my wife and young daughter had been staying. They’ve been to the doctors several times over the same illness.

So far, the thick haze and air quality in Pekanbaru, Riau have forced many of us to flee. So what lies for the future of Pontianak and other cities who suffer through this haze calamity?

“Measuring by the health indications, this will be a grim future for the people’s welfare,” said Dr Ibrahim. “It’s been decades that I’ve stayed and fought for this haze, so we grow pessimistic. We could be optimistic but what has the government done? There is no other place to hide.” 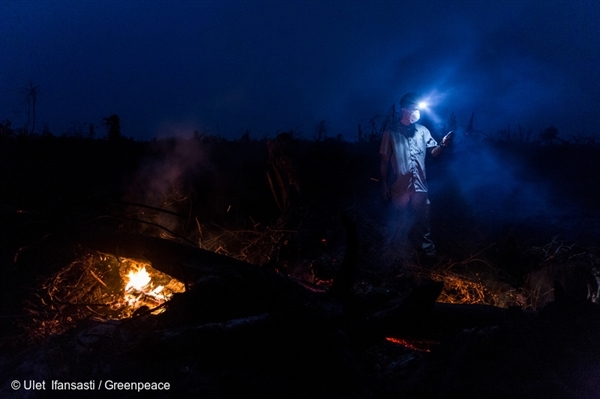 We want to change this.

I’ve been helping teams from Greenpeace Southeast Asia document and expose forest fires, as well as the deforestation and peat land drainage driving them.

Check out the Greenpeace International website to keep up to date and learn how to take action.