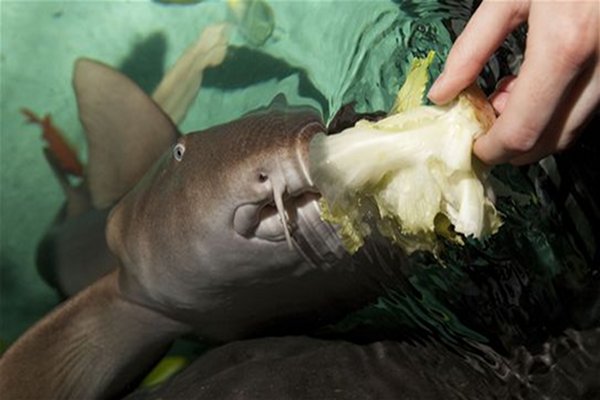 Florence, the shark that became famous for being the first shark to undergo surgery to remove a rusty fish hook lodged is back, is in the news again. This time, it isn’t a  groundbreaking surgical procedure or Florence’s tenacity that’s grabbing headlines. Instead, Florence’s dietary choices are now under the spotlight.

Apparently, the bad experience with a fisherman, which nearly left her dead a few years ago has made Florence shun meat, in favor of veggies in her diet. As Treehugger reports, sharks in the wild are known to occasionally graze on algae, and the rigors of gastronomical surgery can take their toll — but Florence appears to have taken on a meatless lifestyle full time.

“We’re having to hide pieces of fish inside celery sticks, hollowed out cucumbers and between the leaves of lettuces to get her to eat them,” said curator Graham Burrows of Birmingham’s National Sea Life Centre — the place Florence now calls home. “And it has to be well hidden, because if she realises it’s there she’ll ignore the offering and wait for the strictly vegetarian option,” he added.

According to Marketing Birmingham, Graham and his team are determined that their history-making shark is not going to fall ill again through lack of proper nourishment, and use every trick they can devise to make sure she has a proper diet.