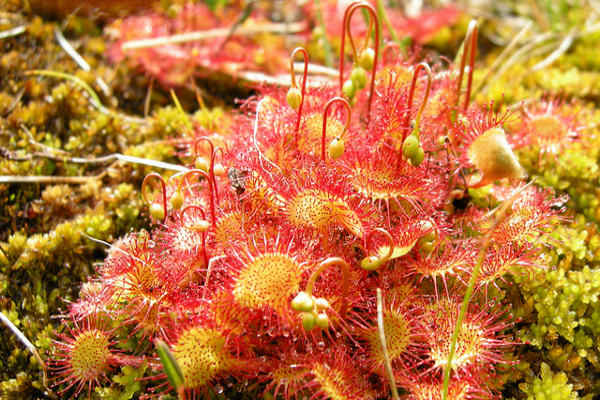 While we are always glad to discover who has made the latest switch to a plant-based lifestyle, we were surprised that the latest addition to the family has come in the form of formerly carnivorous plants.

According to Phys.org, a new study published in New Phytologist shows that some plants, citing common sundew drosera rotundifolia as an example, were observed to be consuming less insect preys. The study primarily focused on investigating the uptake of nitrogen of carnivorous plants in rain-fed Swedish bogs through their roots and through their preys. The team discovered that the plants that receive the lowest level of nitrogen deposition obtained 57% of nitrogen from their prey, while plants growing on nitrogen-rich, i.e. highly polluted, bogs obtained 22% only. The study shows a higher reliance on root-derived nitrogen as a result of increasing nitrogen availability from atmospheric nitrogen deposition.

The news has various implications, one of the most serious being the fossil fuel-burning, which drives our industrializing world. This results to an increasing load of nitrogen deposition in the atmosphere and hence on the ground upon rainfall.

“If there’s plenty of nitrogen available to their roots, they don’t need to eat as much,” Planet Earth  Online quotes Dr. Jonathan Millett from Loughborough University, the report’s lead author. He warns, “In the sites with more nitrogen deposition, these plants now get much more of their nitrogen from their roots, but they still have to bear the residual costs of being carnivorous, and other plants without these will be better able to survive. So it’s quite likely we’ll see less abundance and perhaps local extinctions from carnivorous species. The individual plants get bigger and fitter, but the species as a whole is less well adapted to high-nitrogen environments and will lose out over time.”

The technologies of the modern world have made everything easy and fast, yet it seems that along with these perks, the balance of nature is hazardously threatened. Visit Nitrogen News to know more about the impacts of nitrogen on the ecosystem – and on your health.