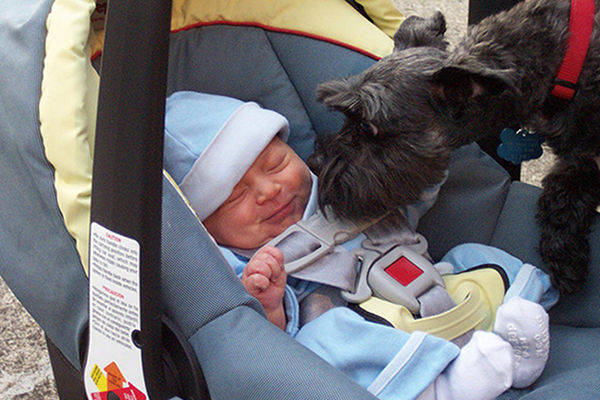 Infants in households with dogs and cats are found to be healthier, according to a  new study published in the August edition of Pediatrics. More specifically, the results show that infants with dog contacts in the household had fewer respiratory tract symptoms or infections, had less frequent otitis and required fewer antibiotics, supporting the theory that animal contacts during the first year of life possibly leads “to better resistance to infectious respiratory illnesses during childhood.”

The study, conducted in Finland, followed 397 infants where the mothers were instructed to closely monitor the symptoms on a weekly basis during the first year after giving birth, beginning when the infant was 9-months-old. According to Medical Daily, infants with dog contacts were 31 percent healthier than those with cat contacts. The study revealed that while cats appeared to have a positive impact on children’s health, it was not as strong or multifaceted as the dog’s.

Dr. Eija Bergroth, the study’s lead author, told Health Day, “One possible explanation might be that the dogs bring something inside the house — dirt, soil — that affects the immune maturation of the child, leading to more composed immunologic reactions to infectious agents later when the child comes in contact with viruses and bacteria.”

The research, however, received various responses from several specialists. The chief of the pediatric pulmonary unit at MassGeneral Hospital for Children in Boston, Dr. T. Bernard Kinane, told Reuters that not all research agrees with the respiratory benefits as a result of exposure to dogs and cats, but he agrees that the trend is in that direction. Dr. Jennifer Appleyard, chief of allergy and immunology at St. John Hospital and Medical Center in Detroit, tells Health Day, “Having pets may have some positive aspects. Pets may offer some protection against developing a propensity for infections or atopic diseases, but I think the development of the immune system is very complicated.”

Nonetheless, Bergroth emphasizes that the study suggests that there is “no reason to avoid animal contacts because of fear of infections, at least not respiratory infections,” and that the decision to keep a dog or a cat must be made on a case-by-case basis.