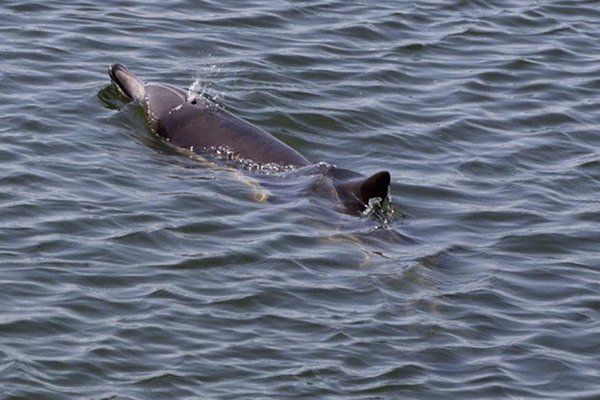 Apparently, bullying is not just a problem amongst humans. This saga began when a dolphin (now nicknamed “Freddy”) was found swimming recently in the shallows of the Bolsa Chica wetlands in Orange County, California, and did not return to the open ocean.

Rescue specialists believe that the dolphin may have been bullied! Peter Wallerstein, director of the El Segundo-based Marine Animal Rescue, told The Chicago Tribune that when the rescue crew attempted to bring the dolphin into the open ocean on Saturday, a small group of dolphins attacked and came thrashing in the water, forcing the homeless dolphin to swim back to the wetlands.

The Orange County Register News reports that specialists are also looking into the possibility of domoic acid poisoning, as the outbreak of this ocean toxin has caused brain damage and death in marine mammals in the past. Dennis Kelly, a marine science professor, says that there is an evidence of the organism that produces the toxin in the plankton samples taken in Long Beach Harbor. Kelly also worries that the dolphin may have eaten fish contaminated with domoic acid, explaining that the abnormal dolphin behavior may be due to the resulting brain damage.

Wallerstein has ruled out such possibility, saying that the dolphin shows no signs domoic acid poisoning after he swam with the it.

“We’re going to observe, and make decisions minute by minute,” said Wallerstein. “There’s no reason to do anything prematurely.”

Poor Freddy…let’s hope he finds his way to a welcoming home.