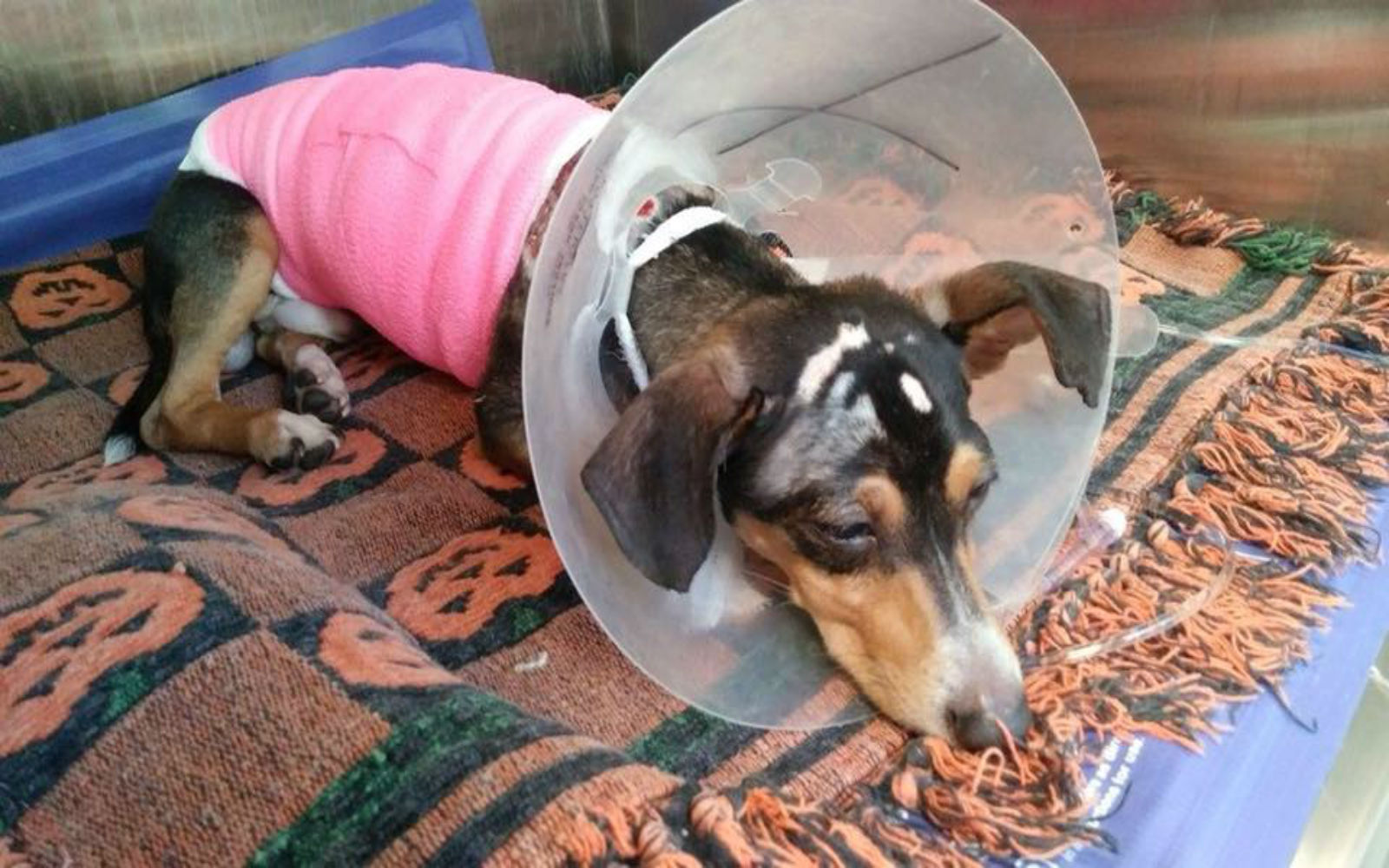 Okay, please brace yourself for a truly horrible story, this time coming to you from Yadkin, North Carolina.

Rocket is a doxie mix, thought to be about two years old, weighing just eleven pounds. Rescue Dogs Rock received an urgent call from a shelter to get some help for Rocket, who looks as though someone has attempted to skin and burn him alive. He was covered in fleas, infected, and his skin was actually peeling off.

Because he was in such a bad state, Rescue Dogs Rock arranged for Rocket to be taken to their emergency vet last night.

The largest flap of his skin had already fallen off, but you can also see all the deep cut marks over his body. Even his head and ears are missing fur. The worst of his wounds goes all the way down to the muscle, and some of his bones are exposed because of them.

To summarize what has happened to Rocket makes us feel more than a little sick. This poor dog was deliberately stabbed and burned, probably over a series of days. It’s no wonder that when he was treated, poor Rocket had puss oozing out of his burned skin.

Rocket had an emergency procedure to remove the dead and necrotic tissue from his back and clean up his skin. He is on IV fluids, pain medication, and antibiotics, and he will need to be carefully assessed. Because of the extent of his injuries, the medical team taking care of him needs to take some time to decide the best course of action for Rocket’s wound care.

His road to recovery is going to be a long one, and the agony he has been in is unimaginable. But Rocket is now at least resting comfortably, and a cruelty case to track down the monster who did this is being explored.

There is not an excuse in the world that could justify doing this to a defenseless animal. We are sick to death of people who think torturing animals is some kind of sport. We have to report anyone we suspect of doing such a thing and do all we can to stop cases like poor Rocket’s happening over and over again. We can’t sit idly, imagining the agony dogs like Rocket go through at such cruel hands.

Rescue Dogs Rock fights hard to save the lives of dogs like Rocket from such acts of barbarity, doing all they can to help them recover and eventually find new homes. If you would like to follow Rocket’s progress, find out more about the Rescue, or donate to help them continue this incredible work, please visit their Facebook page.