Eating GMOs? You May be Playing Roulette With Your Life 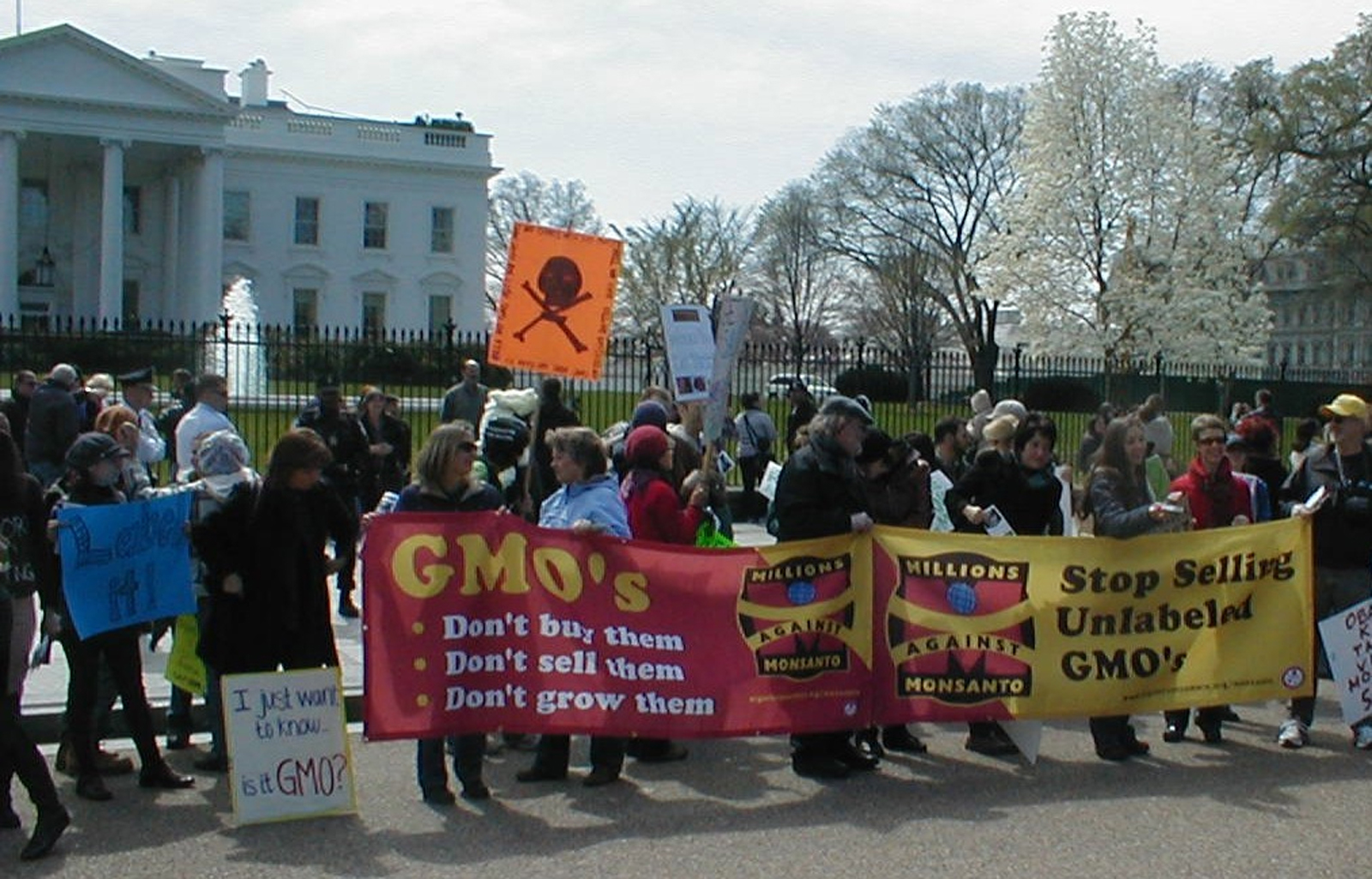 G-M-what? GMOs are genetically modified organisms that are engineered in a lab, in petri dishes, without any influence from Mother Nature, and then used to create new breeds of foods (and other living things). DNA and other compounds, like pesticides, are incorporated into organisms for an end purpose. We know little about the long-term effects of these foods on us and the planet.

“Round-Up Ready” is the name given to soy and corn that was developed by Monsanto and involves the pesticide Round Up being integrated right into the seeds before they are planted. The theory they are trying to sell is that this will require less pesticides to be sprayed, but according to experts at Cornell University, this practice has ended up requiring a more intense use of pesticides as the plants around the corn and soy (and the corn and soy themselves) grow resistant to the Round Up. Mistake?

It gets worse with GM corn. When an insect eats GMO corn, their stomachs, for lack of a better description, explode. At first, studies showed us that there was no impact on human health. Now studies reveal that tiny tears in the cells of human intestines occur when we eat GMO food. The result is a rise in leaky gut, which leads to a rise in food allergies and auto-immune disorders. This is terrifying stuff. The documentary ‘Genetic Roulette’ by Jeffrey Smith, one of the world’s leading consumer advocates should make you sit up and take notice…and never question whether or not to buy organic again.

And these are just two of the thousands of genetically modified foods being mixed into the ingredients in many foods today.

Genetic modification also allows for cross-breeding that is far removed from natural hybridization, although manufacturers of these products would have you believe otherwise with their propaganda. The theory behind GMOs is simple. Scientists select specific genes from one organism and introduce them into another to confer a specific trait. This technology can be used to create new varieties of plants and animals more quickly than conventional methods and produce traits not possible through traditional, natural techniques. The mad scientists behind GMOs would have you believe that their process is just like mixing red and yellow peppers’ DNA to create an orange pepper, but it isn’t. For example, genetic material from salmon can be injected into strawberries to make them more resistant to cold weather. That’s messing with Mother Nature in the most unnatural way.

Look at it this way. Two peppers, even of different colors, would hit on each other in a bar, date, and mate. But a strawberry and a salmon, well, not so much. The consequences of this work are alarming with ramifications we cannot begin to imagine.

While marketers try to sell us on the concept of GMOs as foods that improve yields, are more nourishing for developing countries struggling with famine, and require less use of toxins to grow them, nothing could be further from the truth. While Monsanto and other chemical giants continue to promote these false ideas, there has been no independent proof to support their claims. Only studies conducted within their companies have shown the results they market in their public relations campaigns.

There is, however, increasing concern among independent scientists about the safety of these crops and the resulting foods. The spread of pesticide-resistant plants, the possible toxicity to natural habitats and the species that thrive there, and the impact on human health all remain unanswered questions and are of paramount concern to experts.

Who Benefits From GMOs?

So why do these companies do this? Why take such risks with the collective health of humanity and the planet?

GMO crops and foods would give companies like Monsanto and DuPont the ultimate control over human life . . . the control of food. They have already changed the way commercial farmers farm; this is just the next step to world domination, in the sense of food.

Do you think that the chemical executives sitting in their high-rise glass-walled offices with spectacular views care for one moment about the health of populations in developing countries? Or in the industrialized world, for that matter?

How Did We Get Here?

With more than 167 million acres of GMO crops planted in the United States, making our farmers the largest producers of these crops, there is solid reason for concern. The United States accounts for more than all GMO crops grown around the world. And if you are thinking it’s just about corn and soybeans, here is the laundry list of crops now grown using GMO technology (and don’t you think it’s weird to even use the word “technology” when talking about growing food?): corn, cotton, soybeans, canola, squash, sugar beets, rice, dairy products, farm-raised salmon, papaya, and alfalfa, to name a few. GMO ingredients play a role in more than 70 percent of our food overall.

How can this be? How did these potentially disastrous organisms get into our food in such a high concentration? Public relations would have you believe that the FDA approved GMOs after rigorous testing and long-term studies. Nope. In fact, there are no safety testing requirements, according to their own website. The only testing done on GMOs is done by the companies themselves and are meticulously designed to avoid problems: this, according to Dr. Arpad Pusztai, the leading researcher in this field. (When Dr. Pusztai expressed his concern over GMO issues, he was fired from his job after thirty-five years at a biotech plant.)

The FDA, under the first President George Bush, was specifically directed to promote the research of biotechnology and not ironically, the person in charge of developing the policy was the former attorney to the biotech giant Monsanto, who later became their vice president. The results of his policy showed that GMO crops were not different from traditional crops in “any meaningful or uniform way.” Therefore, testing was not required.

It didn’t stop there. The outrage was perpetrated on Mother Nature came under the Obama administration. In one week, this administration deregulated two very important crops that can affect our future: alfalfa and sugar beets. Deregulation of alfalfa, the nation’s fourth largest crop and a prodigious pollinator, could spell disaster for natural crops. Used mainly in animal feed, GMO alfalfa would contaminate not only soil and crops, but the meat you eat as well. In January of 2011, this important crop was completely deregulated, meaning that there are no restrictions on the growing of GMO, Round-Up Ready alfalfa by Monsanto and no labeling is required . . . so you, the consumer will have no idea. This deregulation also removed what are known as “buffer zones,” specific distances designed to prevent the contamination of organic alfalfa crops by GMO crops, making it virtually impossible to produce organic alfalfa. Indirectly, this means that it could become impossible to produce organic meat and dairy products since alfalfa is such a big part of their feed.

And the hits continued! In February 2011, sugar beets were deregulated allowing for GMO sugar beet crops to be grown without restriction or labeling requirements to avoid “a sugar shortage,” according to Tom Vilsack, Secretary of Agriculture for the Obama administration. God, forbid we should consider using a wee bit less sugar. We’d rather screw up the natural order to feed the hungry mouths of business and lobby groups!

Tom Vilsack says that to regulate GMO crops would be “burdensome” to business, but whose business? The deregulation of these crops and the resulting contamination puts an unreasonable burden on all those dedicated farmers and business people working hard to produce and create organic foods. The deregulation of these crops significantly threatens the ability to produce certified organic products, according to Senator Patrick Leahy (author of the original Organic Foods Prodution Act). The biotechnology industry has declared war on the organic food industry and through shrewd lobbying has won a decisive victory . . . and will continue unopposed with the onslaught of genetically modified foods that are controlled by only a handful of multinational corporations.

Are you mad as hell yet? It gets better.

Scientists who worked for the FDA came to the overwhelming consensus that GMOs were distinctly different from other crops and could lead to unpredictable and hard-to-detect toxins, allergens, new diseases, and nutritional problems. They urged their superiors to conduct long-term studies.

As a result, only one in four Americans knows that they have eaten or are eating GMO foods. The Campaign for Healthier Eating is committed to educating Americans about what is really in their food. One of the goals is to change the regulations so that GMO ingredients in food must be listed as such. The labeling is voluntary now.

Read labels, when you can find them, and work to understand them. Begin with your produce. You know those pesky little stickers that are so hard to remove from everything we buy? They could turn out to be your best pals.

With processed foods, there is no way to tell what GMOs may be lurking in your food, well, foodlike substances. GMO ingredients are widespread and well-hidden. Even some so-called natural food companies employ GMO ingredients so you really have to know the players to win at this game . . . unless you are buying certified organic foods. And with all of the deregulation going on around us, certified organic could become a moot point. At this time, there is only one organization dedicated to rooting out GMOs and letting the consumer know if the products they are using contain GMOs, whether the product is organic or not. The Non-GMO Project’s mission is simple: They are “committed to preserving and building sources of non-GMO products, educating consumers, and providing verified non-GMO sources.”

Most important, you can get involved. Go to www.carighttoknow.org and support the cause in any way that you can. And vote with your dollar. Cornucopia Institute has information on who is doing what with this most important campaign. Use your dollar to tell these companies we will settle for no less than the truth. Finally, get your hands on a copy of the documentary, Genetic Roulette and watch it with friends and family. Genetically modified foods and other toxic additives in our foods should scare us witless and have us all mad as hell.