Why We Should Synchronize Food Consumption With the Seasons 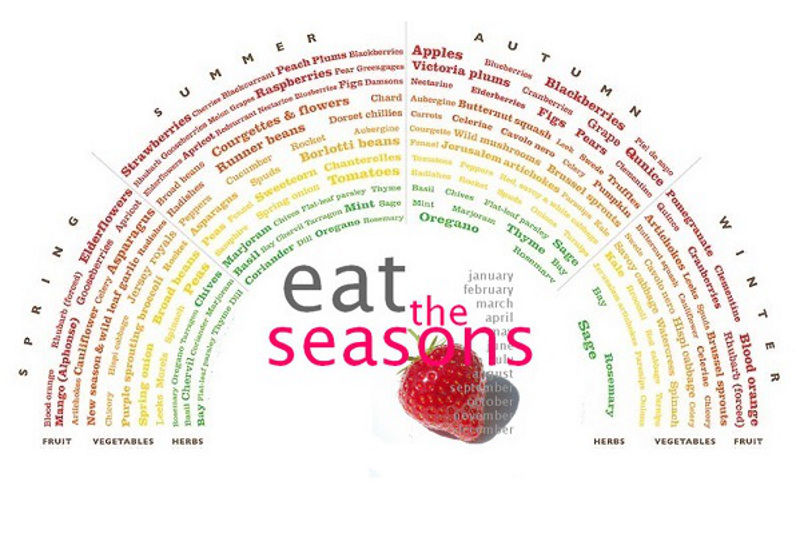 In exploring how to be a conscious and sustainable consumer we are advised to eat local and organic food, but eating that which is also in season seems to be one aspect of responsible consumption we are still to master. During the summer and autumn months farmer’s markets are full of freshly harvested organic food that is usually extremely nutritious and full of flavour. In the absence of such during winter and spring however, we’re reliant on grocery stores and supermarkets for our food, both of which rather confusingly offer a complete range of international produce all year round.

Now, irrespective of whether it’s January or July, we’re able to purchase asparagus, kale, and strawberries. Combined with our own desire to maintain the variety of produce in our diet, we end up choosing fruits and vegetables which are out-of-season, despite being bad for the environment and both our finances and health.

WHAT IS CONSIDERED SEASONAL?

Whether something is in season or not depends almost entirely on the time of year, and therefore whether the harvest is at its peak; this is when the food is cheapest, full of flavor and freshest. Of course, food availability and growing seasons are also affected by region. In warmer climates, for example, the harvest season starts earlier and lasts longer, whereas in colder climates the harvest starts later and ends sooner.

WHY DOESN’T OUT OF SEASON FOOD MAKE THE MARK?

It should stand to sense that if it’s not possible to grow asparagus in Canada in February (for example) something is amiss if it’s always available in stores. In asking how and why this is possible we uncover one of two scenarios: either the food has been grown in an artificial environment (such as a greenhouse) or it has been grown in another country and transported to the region.

Greenhouses: producing food in greenhouses has grown as a method for farming and is now used worldwide. The most popular foods to be grown include cucumber; tomato; and sweet pepper, with special greenhouse variations of certain crops (such as tomatoes) now existing for commercial production.  These crops have been modified for the method of farming; duration of transportation; as well as to enable more efficient packing. Other greenhouse-grown fruits and vegetables include asparagus, bananas, cabbage, celery, cherries, eggplant (aubergine), figs, grapes, lettuce, onion, orange, pineapple, strawberries, and zucchini (courgette).

Greenhouse farming introduces a lot of new expenses due to the buildings needed and the maintenance of these, on top of the usual cost of labou and seeds. Farmers who have to artificially pollinate plants or heat their greenhouses generally have even greater costs to deal with, all of which are passed on to the consumer. Furthermore, as the name should suggest, greenhouses release a huge amount of greenhouse gases into the atmosphere.

Imports: food which is transported amasses a lot of food miles, with some estimating the average meal travels 1,500 miles from producer to supermarket. In addition, food transportation contributes significantly to global carbon emissions and now the industrialised international agricultural process is considered to be responsible for between 44 and 57% of global greenhouse gas emissions. Intensive food cultivation in some regions to meet the constant demand for fruit and vegetables has further environmental costs because of local pollution, soil degradation, and the huge amount of water needed.

The hidden side-effect of importing produce, however, is the loss of nutrients. Fruit and vegetables that have been imported can sit in storage containers, transportation trucks, as well as within the supermarket for days and weeks during which time the color becomes dull and the skin dries out, while the flesh loses its smell and taste. On the inside, from the moment the fruit and vegetables are harvested, the nutritional content of the food begins to deplete, which can make the act of eating them at all almost redundant.

On top of the environmental cost of greenhouses and international food transportation, items obtained out-of-season have a financial cost. In both instances consumers pay a premium to consume a wide selection of fruit and vegetables all year round, potentially even twice the price of that which is consumed in season.

In growing so accustomed to the choice we have all year round, we’ve also overlooked the fact that eating cooling summer foods when there’s snow on the ground might not be what nature intended, and therefore not what our body needs. While we like to think that we know best, there is inherent wisdom in the seasons. In actual fact, in eating seasonally we provide our bodies with the necessary food at different times of the year. As a result our diets will be naturally diverse while balancing our systems so that we can cope with the cold of winter and heat of summer.

SYNCHRONISE WITH THE SEASONS

Consuming “fresh” international produce out of season is a recent phenomenon, but has become something we do simply because we can. Because we’ve grown accustomed to choice, the idea of passing up these options in favor of the seasonal food of the region may seem too limiting, but it is worth doing for the above environmental, financial, and health reasons.

In the summer one should be eating cooling summer fruits and vegetables; and in winter, fruits such as apples and pears, coupled with warming root vegetables. While it is inevitable that we will eat some out-of-season food, it’s worthwhile noting that these fruits and vegetables should almost certainly be bought frozen. Much like “fresh” out of season produce, that which is frozen has been transported long distances but it will have been harvested during the peak season, therefore having a higher nutritional content (assuming no salt has been added).