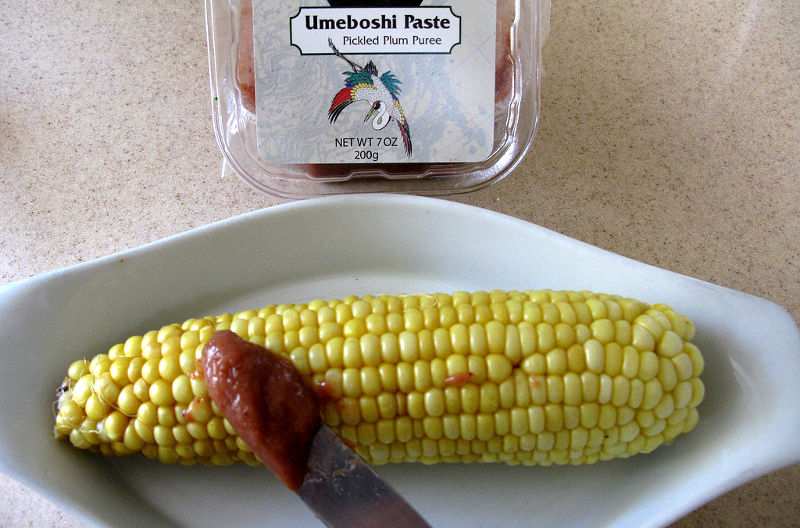 Umeboshi vinegar (also known as plum vinegar as well as Ume Su) is the salty, sour, and sweet by-product of the umeboshi-making process.  Umeboshis are the red, pucker-up delicious fruits commonly used in Japanese dishes.  These fruits, called “ume” in Japanese, are actually more closely-related to apricots than plums.  Traditionally, the umeboshi are dried and then preserved in a salty brine, with purple perilla leaves that add a bright red color.  These days, however, some brands use red dyes in place the leaves as well as less salt, which can prompt the use of artificial preservatives.  The Eden brand, which is the most widely available in the US, uses the traditional method: The ume fruits are pressed and the liquid that leaks out of them is bottled up for use as a condiment.

Umeboshi vinegar is used widely in Japanese cooking as a seasoning.  It’s often tossed with steamed vegetables and sprinkled over sautéed greens and rice.  In the US, it first became popular outside of Japanese communities in the 1970s, when people became exploring macrobiotic and Japanese cooking.  Umeboshi vinegar is quite salty, but it boasts a sour, fruity flavor.  It is very unique, and can be creatively applied to vegan dishes where a sea-like or fish flavor is desired. It can be used in place of a fish sauce, although its flavor might seem fruitier and brighter to your personal palate.

Besides their dramatic flavor, Japanese pickled plums have remarkable medicinal qualities.  Their powerful acidity has a paradoxical alkalinizing effect on the body; neutralizing fatigue, stimulating digestion, and promoting the elimination of toxins.  The Far Eastern equivalent to aspirin and apple, they also act as a potent hangover remedy.  An umeboshi plum a day is regarded as one of the best preventative medicines available.

The oldest Japanese record of pickled plums being used as a medicine is in a medical text written around one thousand years ago.  Umeboshi were used to prevent fatigue, purify water, rid the body of toxins, and cure specific diseases such as dysentery, typhoid, and food poisoning.  In 1968, a component in Umeboshi was found to have germidical effects on the tuberculosis bacteria.  Here are a few ways you can use umeboshi plums for your benefit:

As a general tip, be careful to adjsut any salt in your dish, as more often than not, the addition of umeboshi vinegar will be enough for it.

Large, wide mouth, clean, non-metallic jar with a tight lid.  Should be large enough that the plums, sugar, and sochu should only fill around 3/4 of the jar.