Why Plant-Based Meat is Better Than the Real Thing 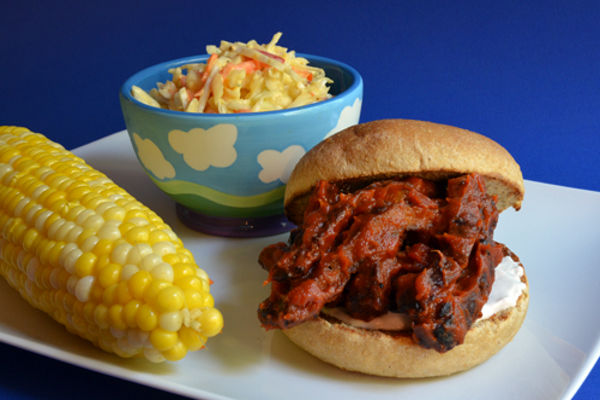 Here at One Green Planet we advocate for making conscious choices that help people, animals and the environment. One of the most important choices to be made is abstaining from the consumption of meat, the most obvious advantage being that an animal doesn’t die so we can eat a bacon sandwiches, BBQ ribs, or Buffalo wings. If you’re salivating at the thought of these dishes don’t fret, as there are great faux meats available which can curb the craving for the real thing and tantalize the taste buds. Before we delve into what treats are in store, however, let us first consider why we shouldn’t be eating the real thing.

THE REAL THING IS REALLY WRONG

It is estimated that 150 billion animals are killed each year by animal-based food industries because the diet in developed nations is rather disappointingly based around animal products. There is no doubt it’s immoral for such an enormous number of sentient beings to die merely for the pursuit of pleasure or due to social conditioning; moreover, the slaughter of any animal is unquestionably unethical. In eating meat one is complicit in the torture and slaughter of all of these animals; the solution is simple: stop.

In raising these animals millions of tonnes of waste are generated that contaminate both the ground and water supply, while millions of tonnes of methane – one of the more potent greenhouse gases – are released into the atmosphere. In fact livestock is responsible for about 18% of global greenhouse emissions, more than global transportation. We must also remember that for these animals to be raised they have to be fed, pastured and provided with water. For this to happen, a lot of food (primarily corn and soybeans) must be produced, land set aside, and water allocated, all of which could be used to help alleviate problems elsewhere in the world.

As if that wasn’t enough to have us running from the butchers, there is our own health to consider. While not all fat is bad, saturated fat from animal products is. Consumption of animal fat puts a strain on the heart because it is deposited in the arteries, increases blood pressure and cholesterol levels, and causes (sometimes dangerous) weight gain. Perhaps a scarier side-effect of meat consumption is putrefaction: the rotting of meat in the intestines which, for the most part, goes unnoticed. This produces harmful toxins which accumulate in the colon, intestines, kidneys, and liver, destroying bacterial cultures and causing numerous digestive problems.

So, having grasped the idea that consuming meat is unethical, unhealthy and unsustainable, the next step is to… eat? Those who already follow a plant-based diet will know that five or ten years ago there were a lot fewer meat substitutes available. Now, however, we’re spoilt for choice. If you’re considering a plant-based diet, GO FOR IT! In doing so you aren’t going to have to forgo bacon sandwiches, BBQ ribs, or Buffalo wings.

There are a few particularly popular faux meats available which are made to replicate certain aesthetics of real bacon, beef, chicken, duck, ham, lamb, or turkey such as the appearance, flavor or texture. Once you delve into these delightful dishes you’ll wonder why you ever ate the flesh of a dead animal!

SEITAN (WHEAT GLUTEN): unlike tempeh and TVP, seitan is made from wheat rather than soybeans. It is considered to be the most convincing meat substitute because it resembles meat in texture a lot more effectively than all other options. Uses of seitan include products made by Gardein, Morningstar Farms (be careful to select only vegan products) and, perhaps most famously, Tofurky. While it is possible to purchase these from the store, it can also be made at home using wheat gluten.

In some respects Tofurky deserves its own mention as one of the best faux meat products on the market. It is a loaf of vegetable protein made from seitan and tofu that is produced to simulate a turkey, often coming complete with its own stuffing. For those who don’t want to celebrate Christmas and Thanksgiving with a dead bird as a centerpiece but do want a traditional dish for nostalgic reasons look no further than Tofurkey. The company, Turtle Island Foods, also make products for other times of the year, such as sausages and slices.

TEMPEH: a traditional soy product, it is made from fermented soybeans but unlike tofu is made from whole soybeans, and not the milk. Tempeh has different nutritional characteristics to tofu – higher content of fibre, protein and vitamins – as well as textural qualities – a lot denser. Because of its density, tempeh is best marinated before cooking to soften it up and improve the flavor. Turtle Island Foods have some excellent tempeh strips which can be used in salads, sandwiches or as part of a main meal.

TEXTURED VEGETABLE PROTEIN (TVP): another common meat substitute, TVP can be made from soy concentrate or soy flour and has a mild bean flavour. It is one of the most versatile substances, coming in dried chunks, flakes or granules, and is easy to cook. Once rehydrated it becomes a fibrous texture similar to meat, making it perfect for vegan versions of traditional meat dishes, such as burritos, chili con carne, lasagne, or spaghetti bolognese. In addition, despite having a protein content equal to that of meat, it is completely fat free! Great soybean-based faux meat options include products by Beyond Meat, Field Roast, and Yves Veggie.

If you’re still craving the bacon sandwich, BBQ ribs or Buffalo wings, don’t worry, you’re in safe hands! No animals were harmed in the making of these products, no vital resources were diverted from other humans desperately in need them, and neither was any harm caused to the environment. What’s more, the nutritional content is a lot higher than their meat counterparts. Win. Win. Win.