Lights, Camera, Activism: Eat Delicious Food, Go to the Movies, and Change the World for Animals 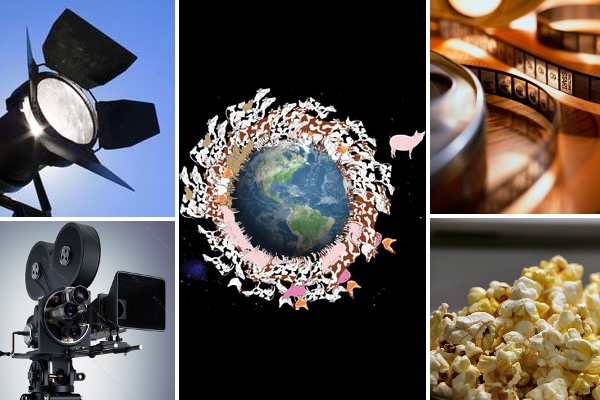 When we hear the word “activism,” our thoughts usually run to things like leafleting, protests, demonstrations, or rescues. Or, perhaps what comes to mind is “armchair activism,” things like letter-writing and contacting legislators. And all of those things are a hugely important part of creating change for animals. But animal activism is different from other forms of activism. We are not simply trying to get a change in the law, though legal change would obviously be welcome. And, although consciousness-raising about animals is hugely important, the changes we are asking people to make once their consciousness is raised go far beyond incorporating another group of humans into their sphere of concern. When people accept that animals are inside that sphere, they have to change so many things about their lives. Sometimes the best thing we can do is not just inform them about why those life changes are so necessary, but help them see that those changes are possible, and easy. Because the fact is that for many people, they are not going to make change until they understand that it’s not going to be that hard.

For this reason, we here at Our Hen House absolutely love food activism. Teaching people that vegan food is delicious, healthy, sustainable and easy to prepare is one of the most important things we can do to make change for animals. And, of course, it’s delicious fun, too.

Once you recognize this fundamental truth, the world opens up to so many creative ideas for reaching people with food. There’s cooking, of course, whether you are bringing a dish to your neighbor’s party, hosting a feed-in, running a bake sale, or beyond. And there’s eating, one of the most enjoyable forms of making change. Getting a restaurant to serve a vegan option, making sure there’s a vegan option at your cousin’s wedding, hosting a vegan potluck for your non-vegan friends – all of these are ways to spread the word about the wonderful world of vegan food, and, as a bonus, all result in your getting something delicious to eat.

But maybe it’s time to go a bit further. Maybe the world, and the animals, can’t wait for people to gradually get used to the idea that vegan food is not only edible, it’s scrumptious. If you are ready to move to the next step, encourage people a little bit more vigorously, it seems like right now the answer is obvious. Take them to the movies.

The world of animal-friendly, planet-friendly cinema is exploding beyond what anyone would have thought possible just a year ago. Everyone who cares about this issue needs to become familiar with these movies. Then, we must come up with ways to get them in front of audiences who need to be educated.

Some of the obvious places to look at to host movie screenings are libraries, community centers, churches, and colleges. But the great thing about this kind of activism is it can be as big, or as small, as you want. If you think you can pull it off, you can rent out a theater and charge admission. If the whole thing daunts you, start in your own living room. Nowadays, virtually everyone has a huge screen right at home that is perfectly suitable for showing a movie to a group.

So now we have an idea for where to host our screening. But how are we going to get an audience? Well, the easiest way to reach an audience is to find something that directly affects them. And lucky for us, there are an abundance of movies coming out right now that talk about the health benefits of a plant-based diet. This is a subject that is on everyone’s mind, since almost everyone is sick, or knows someone who is sick, from one of the diet-related lifestyle diseases that plague our country. If self-interest in their health isn’t enough, you can always combine a screening with a vegan meal. Make it a potluck if you’re too busy. One of the most creative ideas we’ve seen of late is to simply pay people to come. Nothing talks as loud as money!

Here are a few movies to watch out for:

These movies are truly compelling. I dare anyone to watch them and not start thinking that it’s time to move toward a diet that is healthier for them and for animals. All you have to do is get them in those seats!