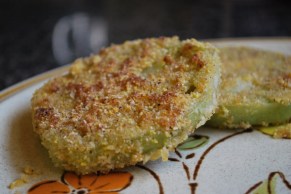 "Oh, what I wouldn't give for a plate of fried green tomatoes like we used to have at the café.” Those are the words of Ninny Threadgoode in 1991’s Fried Green Tomatoes, and so often, those exact words are on my mind. Vegans would do best to make their own, rather than ordering a batch of fried green tomatoes from a café. Restaurants tend to use an egg dip to make the batter stick, but as vegan cooks have discovered in so many recipes from cakes to fritters, eggs just aren’t necessary in cooking. As you’ll see in the following recipe, any type of liquid dip helps batter stay on during frying. Here, I’m using dark vegan beer, but soymilk or even water would work. Keep that tip in mind anytime you’re frying anything and wish to keep the meal vegan. Add a few teaspoons of cornstarch to any liquid dip for more staying power. Lucky for us, early summer is the perfect time for whipping up a batch of tangy, battered un-ripe tomatoes. This recipe comes courtesy of my Southern mama, who served up these fried beauties on Father’s Day in my parents’ Arkansas home. If you’re worried about calories and fat, you can also try baking these tomatoes in a 350-degree oven until browned. But nothing beats a crisp, fried tomato. I’d suggest skipping dessert and going all out with tomatoes.

Bianca Phillips lives in Memphis with her dog Datsun, her six cats, and boyfriend. She maintains the blog Vegan Crunk, and she’s spent the last several years putting together Cookin’ Crunk: Eatin’ Vegan in the Dirty South, a cookbook of veganized Southern classics due to hit stands in January. By day, Bianca is a newspaper reporter and associate editor at Memphis’ only alt-weekly, The Memphis Flyer.