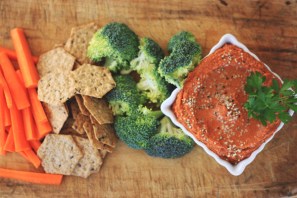 Everyone's had hummus or guacamole (and they are great). But have you tried muhammara? This is probably my favorite dip/spread to make. Like ever. It has smoky, creamy roasted red peppers, toasty walnuts, and nutty little hemp seeds. The farmer's markets are overflowing with peppers of all types where I live. I had to get some and make something special before they were gone. Shepherd peppers are ideal for roasting because their thick skins peel off rather easily once cooked. Feel free to use bell peppers though. They'll definitely be just as tasty. I've included instructions for home-roasting the peppers, but to save time, you can reach for some jarred ones too. I use a combination of walnuts and hemp seeds to really ramp up the protein and omega-3 content. The dip is finished up with a little sweetening, tart lemon juice, some pungent garlic and voila, super impressive party snack. It has so much going on flavor-wise, really lively and a bit complex. It's a little thicker than most dips thanks to the addition of bread/cracker crumbs and it's super easy to make and easily modified to accommodate what kind of ingredients you have on hand. I use gluten-free crackers to make crumbs in this just so that I'm not putting off any peeps with gluten sensitivities at a party/potluck.

Laura Wright is a food blogger and life enthusiast behind The First Mess. She loves cooking with natural foods, eating seasonally and, most of all, sharing meals with others. Her efforts gravitate toward two simple ideas: everyone has the right to good, wholesome food and that a meal is nothing to take for granted.