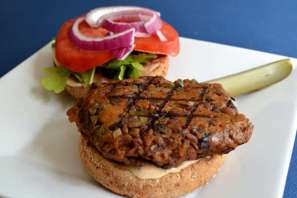 Fermented foods, in this case wine and sauerkraut, bring extra flavor to dishes. These savory burgers are hearty and toothsome, and will turn omnivore heads at any cookout.

As burgers seem to beg for beer, I recruited Jim to do a pairing and here's what he chose. Having just spent a delightful few days down in Asheville, NC, our new Favorite Place, I would like to give a nod in the direction of Highland Brewing Co., whose beers are vegan-friendly. On our way out of town I picked up a smattering of various ales to take home, and I only grabbed one Highland Gaelic Ale. Usually my tastes are toward the dark side (of beer) but this beer had everything going on: a not too hoppy, malty flavor which accented the burger but didn't hop-annihilate it or stout-bury it. Handcrafted, small-batched, pure Asheville goodness in a bottle. I SHOULD HAVE BOUGHT MORE! Now, I have to return to my new Favorite Town even sooner that I initially anticipated. This beer was incredible. Burgers were pretty damn good too. Here's hoping your summer grilling season gets off to a great-tasting start!

Tami Noyes lives and cooks in the Midwest. Currently working on her second book, Tami is the author of American Vegan Kitchen. Starting out as a baker for a local vegetarian café in the early ‘80s, Tami’s love of cooking is her way of expressing her compassion and nurturing for all beings and our planet. She believes that sharing the fantastic flavors of wonderful vegan foods is best way to encourage others toward veganism.