Why You Should Be Wary of Low-Fat and Light Foods 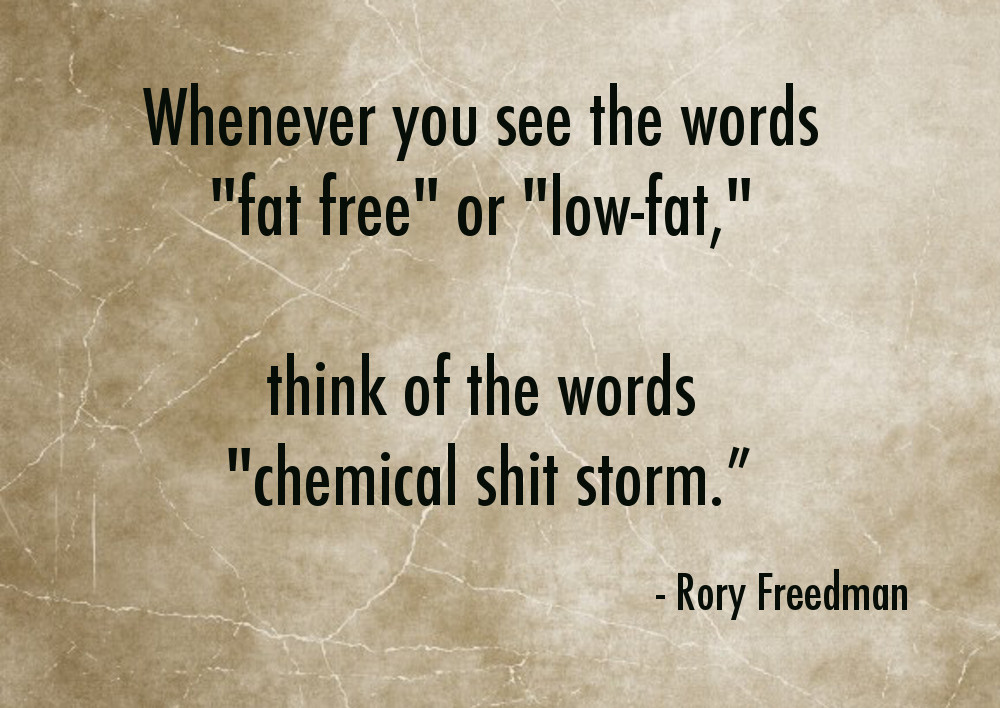 ‘Low-fat’ and ‘light’ labels are plastered on manufactured products “ad nauseum” to supposedly benefit the consumer with a better, healthier product. These ‘light’ foods, though, are usually in no way better for the body. In addition, the processes used in making products lower in fat are simply atrocious. Let’s deconstruct these labels to shed light on their unhealthiness:

Diet products sell. Advertisers have wrongly convinced consumers that ‘low-fat’ chips and cookies are better than their full-fat counterparts. Now, this is partially true because the diet version may be lower in calories, but diet foods are frequently eaten in excess, which equates to the same caloric bomb as the original product. Professor Kerin O’Dea, director of the Sansom Institute for Health Research at the University of South Australia states, “The food industry has worked out that saying a product is ‘very low in fat’ or ‘non-fat’ sells.”

Manufacturers may use the label ‘low-fat’ when their product contains three grams or less of fat per serving. Similarly, ‘light’ means that the food has been morphed into a food that has a third fewer calories or no more than half the fat of the original substance. ‘Light’ can also translate to the sodium amount in a product; if a product contains half the sodium of the original, but it is usually labeled as ‘low in sodium.’

The way manufacturers go about removing the fat from products and adding in unsavory additives is a bit complex. Low-fat or 1 percent milk exemplifies this process: after the cow is milked, its milk is sent to a plant where it is pushed through centrifuges that separate it into its distinct parts, namely fat and protein and other various solids. The process does not stop there though. Once separated, the compounds are recombined to create wholly new substances known as whole, low-fat, and non-fat milks. We are mainly concerned with the latter two because they bare the ubiquitous label of ‘low-fat’ or ‘fat-free’ and are the most recommended by so called health experts (even though they are far removed from the original milk squirted out of cows’ utters). To make these milks lower in fat, powdered milk concentrate formed by spray drying at high temperatures is put into the mix as a fat replacer, and then the milk creation is sent off to be pasteurized. In case of reduced-fat chocolate milk, sugar, high fructose corn syrup, corn syrup solids, or artificial colorings and flavors are added to the mix, all because fat is seen as the enemy.

Similarly, the quintessential fat-free diet cookie, Snackwell’s brand Devil’s Food Cookie Cakes, are made with by a specialized machine. Four hours and 19 minutes are needed to fabricate each fat-free, spherical concoction: the sponge base is dipped in marshmallow twice and cocoa once to create two layers. Each layer is air-dried for one or two hours because if they are heated, they disintegrate like the Wicked Witch of the West. The “cookie” was developed as far away from nature as possible: flour and sugar and water and extenders and emulsifier technology intertwined to create it. The fat is removed from the cocoa with alkali while artificial vanilla flavoring is injected into the “cookie” to create the artificial masterpiece.

Ultimately, food labeled as ‘low-fat’ and ‘light’ are typically not a healthier choice. Because a reduction in fat is required for these labels, manufacturers add in sugar, sugar alternatives, flavor enhancers, natural flavors, or artificial flavors to make the product edible or flavorful. Essentially, buying these products perpetrates the low-fat/fat-free myth and tells manufacturers that consumers like the taste of chemical additives more than fat. It also tells manufacturers that they can get off with making a tasty, low-calorie snack full of seemingly safe chemicals.