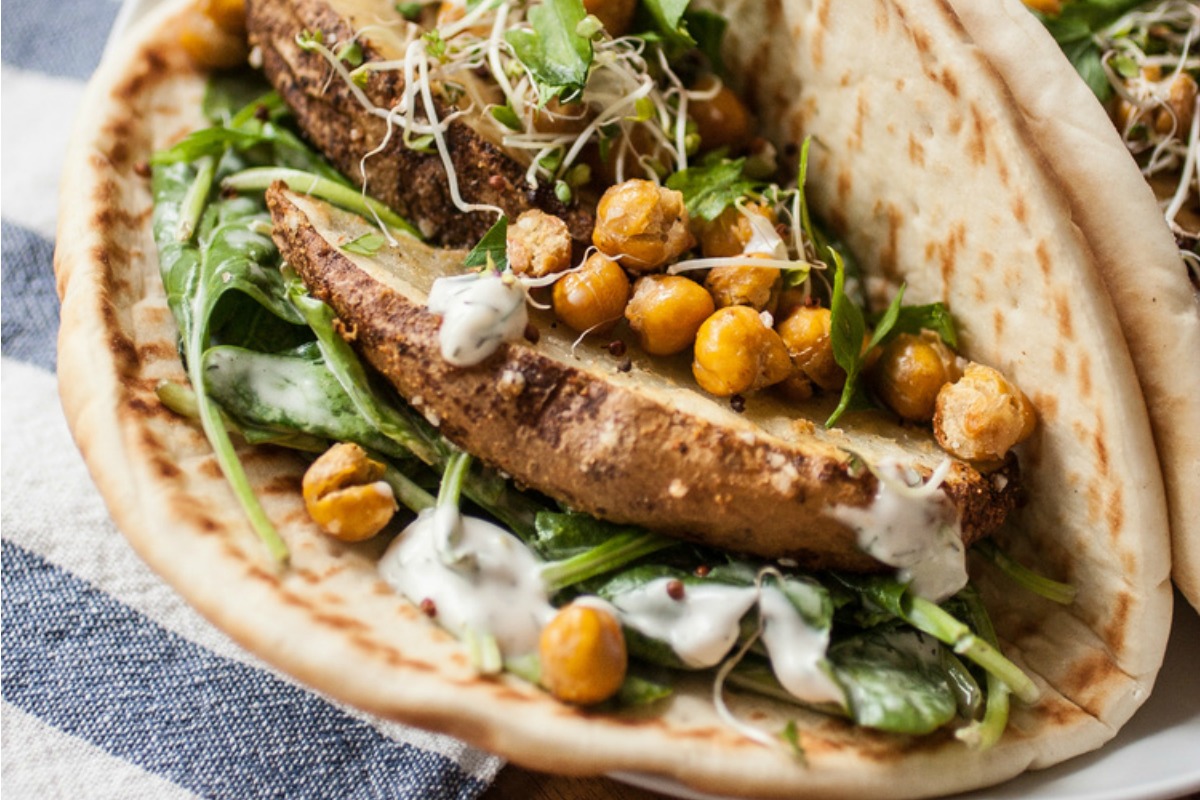 When you think of chickpeas, you may think of falafel or hummus. Maybe you just wrinkle your nose at the thought of garbanzo beans, as they also go by. You picture the hard, yellowish balls that sometimes appear at the salad bar between the mushrooms and the beets.

Whether you’ve had chickpeas in their non-food processed form or if you swear by adding hummus to anything you can think of, you might be surprised to learn that these beans are more versatile than you originally thought.

Chickpeas, by nature, are gluten free and are very nutrient-dense. They are a good source of protein and fiber, which is essential in a primarily plant-based diet. Plus, they can be purchased in a can or dried in virtually every local grocery store. Chickpea flour is also becoming more widely available (although you may have to search a bit more for that if you don’t want to make your own) if you want to use that to make baking recipes gluten free.

So, if you’re used to only thinking of this legume as a snack or an odd salad add-on, get ready to see it in a whole new dynamic light!

Here are some creative ways to use chickpeas for any meal. 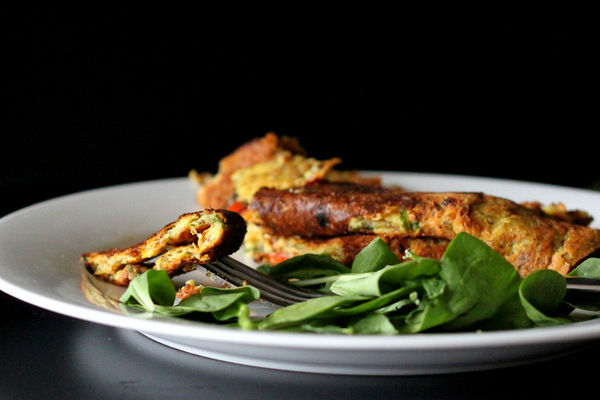 I know, it sounds absolutely crazy – beans and breakfast? However, chickpea flour can be used as an egg replacement for a plant-based breakfast that rivals a traditional egg omelette. Simply use the gram flour (this is chickpea or garbanzo flour) instead of eggs and you can enjoy delicious breakfast treats such as a Chickpea Flour Omelette with Spinach, Onions and Bell Peppers. Or, if you are looking for a gluten-free alternative to wheat toast, try Mediterranean Chickpea Bread. Top the bread with your favorite plant-based butter spread or nut butter for a healthier, more filling breakfast than the wheat flour alternative. 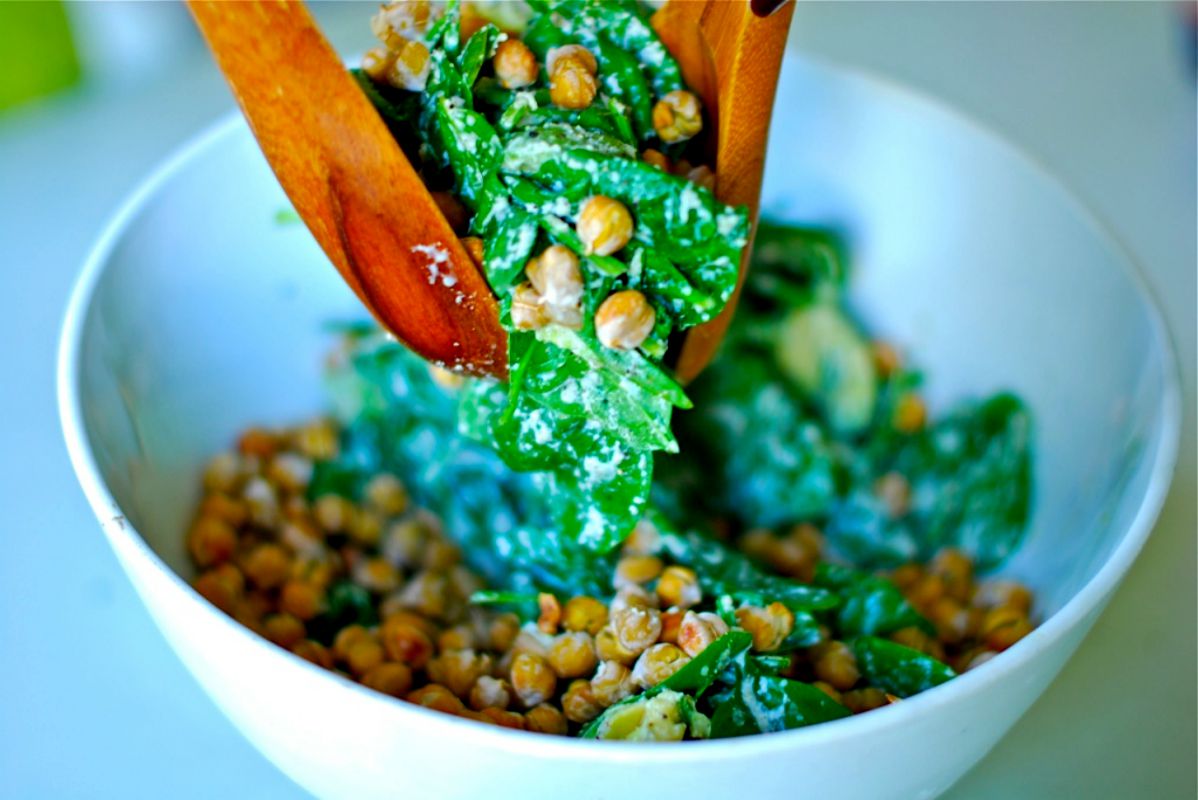 When it comes time to lunch, the easiest place to add chickpeas to your meal is in a salad. You can just toss them in any prepared salad for an added boost of flavor, protein and fiber or you can use them as the main ingredient in a salad, such as the Superfood Salad. Or, check out the Quinoa and Chickpea Salad with Lime and Cilantro for a Mexican twist on this typically Middle Eastern staple. Or, use the chickpeas to carry the meal with a Lemony Chickpea Salad.

Chickpeas can also make a great addition to sandwiches. You can mush up canned chickpeas with a little celery, onion, and plant-based mayo to make a tasty vegan version of tuna salad or use roasted chickpeas to turn up the crunch factor in your favorite wrap.

If you aren’t feeling super adventurous and want to use chickpeas as you’ve known and loved them, here are 10 cool ways to use hummus, besides as your typical dip. Because hey, there’s nothing wrong with hummus!

When it comes to dinnertime, you want as much protein as you can, so adding chickpeas to a meal is a great idea. You’ll need to combine them with other vegetables or proteins to get a full dish, but here are some easy ways to do that. 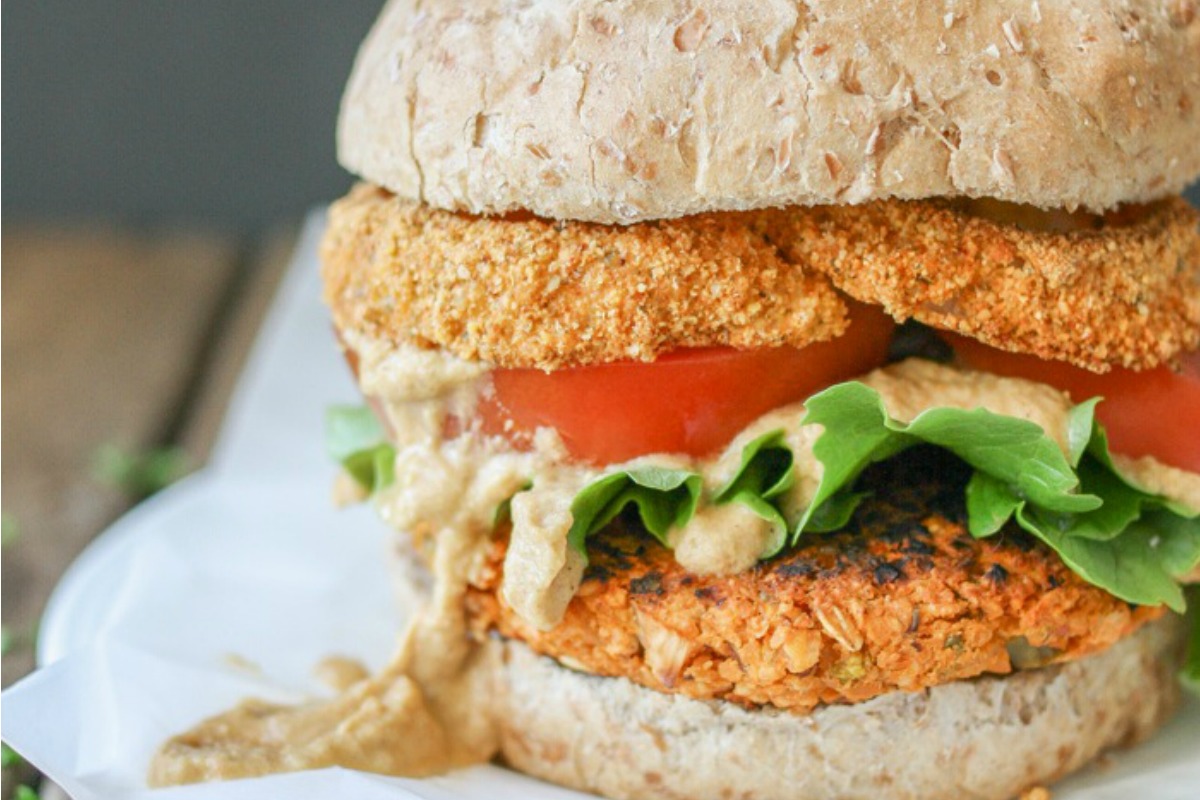 Just add some cauliflower and create a Chickpea Patty that you can top with whatever you are in the mood for. Similarly, if you’re craving a hearty burger, try a Chickpea Burger Patty. 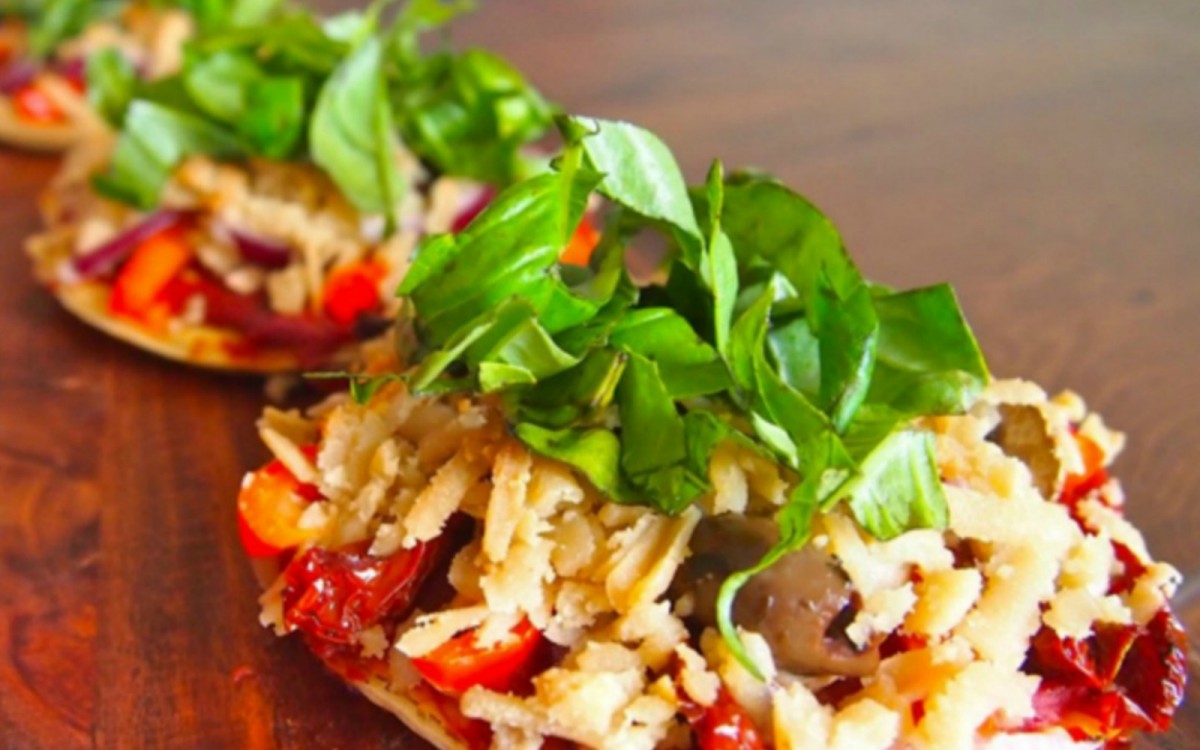 If pizza is what you’re after, use chickpea flour to make a pizza crust with just five ingredients (and I bet you have the other four in your house already!). Top the pizza with sauce, hummus or whatever sounds good at the moment. 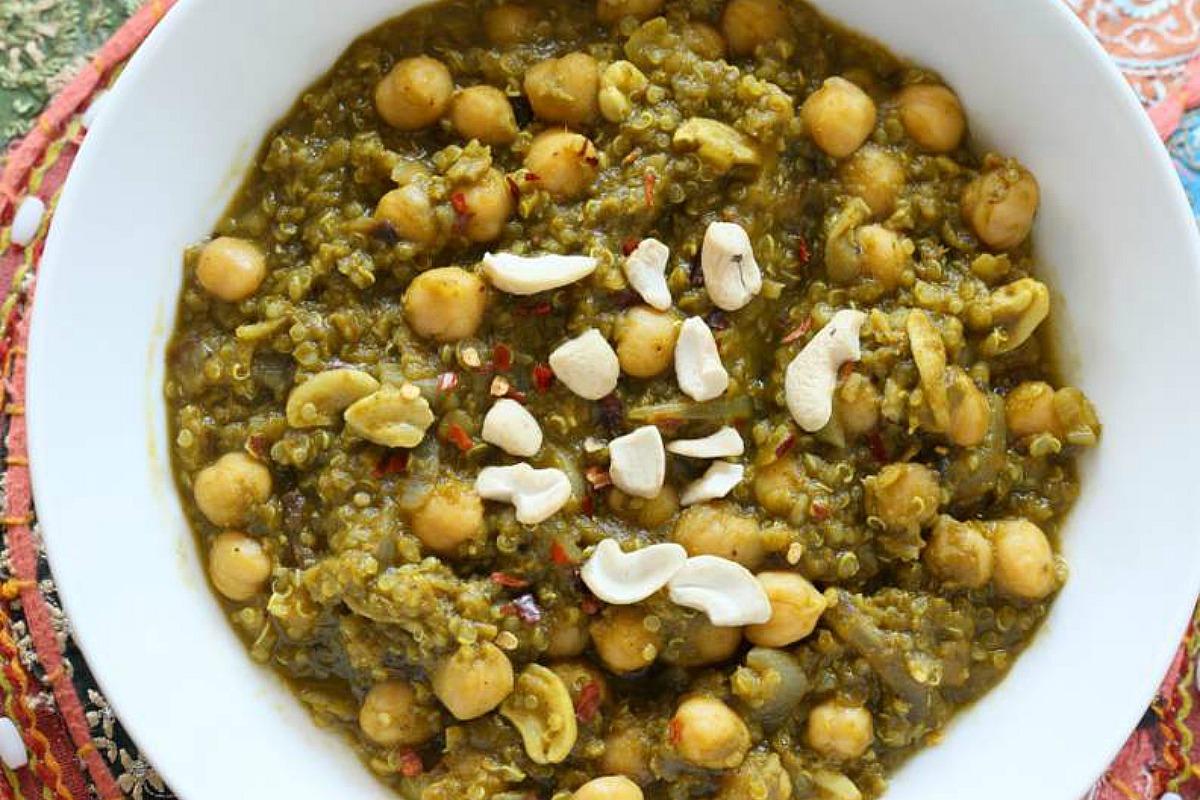 Chickpeas won’t get all mushy like some legumes when they are cooked for a long period of time, so they are commonly used in stews, such as the Iranian Eggplant and Chickpea Stew. Garbanzo beans can be easily added to pasta dishes to boost the protein content. Look to add chickpeas and almonds to pasta, such as Linguine with Greens and put together a protein-packed meal. 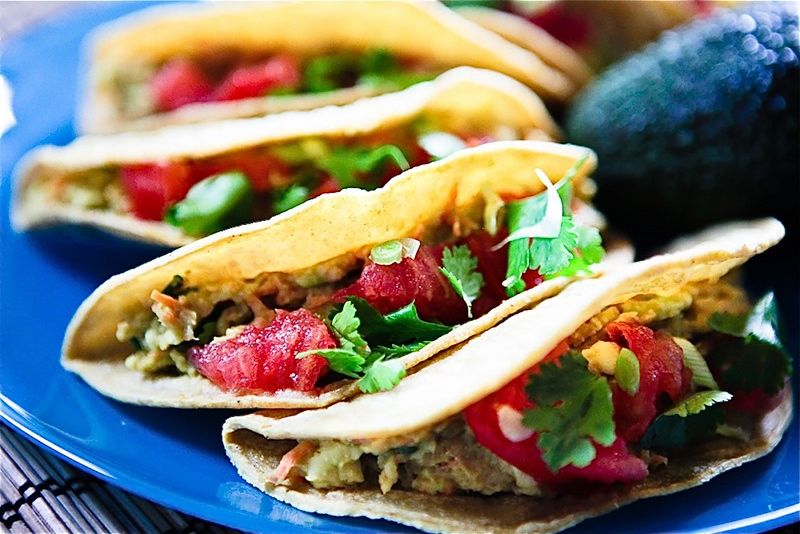 If you’re still looking for a Mexican spin with the chickpeas, try a Cilantro Avocado Chickpea Taco, which looks and tastes just as yummy as that sounds. Who needs meat when you can use chickpeas and season them with cilantro, avocado and a bit of lime? 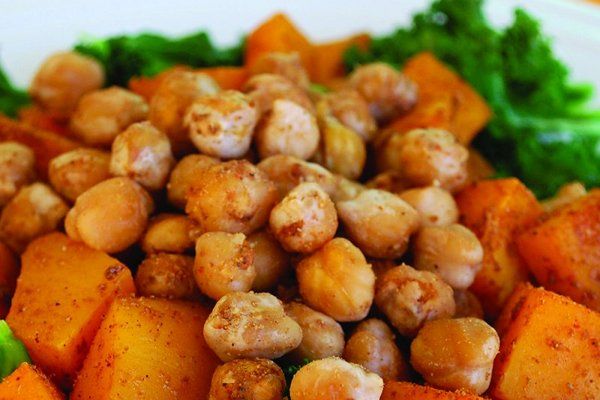 While basing a meal around chickpeas may still be intimidating, it certainly is easy to make a side dish with the legume. Want a potato salad? Why not try a warm potato salad with spinach and chickpeas? If you chose to make your burger with something other than chickpeas (or heck, you want a lot of garbanzos in one meal!), this side salad will go perfectly.

If you’d rather have something crunchy, roasting chickpeas is an easy way to get a crunch with health benefits. Try oven roasted chickpeas, where you can season them in a number of different ways, including buffalo roasted chickpeas with a punch of spicy flavor. If you want to turn the chickpea flour into fries, here’s a healthier version of “French fries,” chickpea style.

If you want to try your hand at making your own crackers, add some sesame and enjoy Herbed Chickpea and Sesame Crackers, which would be perfect with some hummus! For a version of the classic falafel, you can also make Chickpea Balls and serve them as a main course or a side. 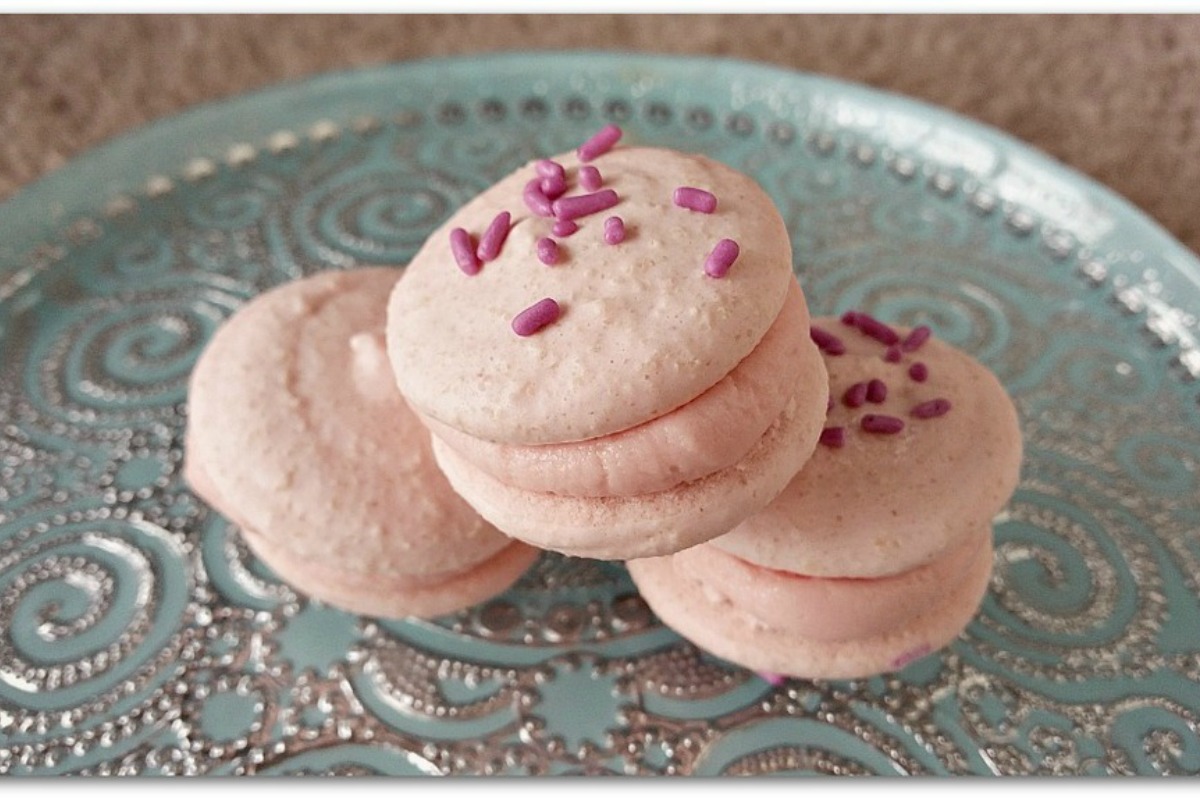 Believe it or not, chickpeas (or at least chickpea flour) can even be used in desserts. Those that follow a gluten-free lifestyle have a hard time with desserts because it seems as if everything comes from regular flour. Look to make moist, chewy Blondies with chickpeas! Or, try a Chickpea Tart. Trust me, they taste better than they sound! You can also hold onto the water when you drain your chickpeas and use that aquafaba goodness to create vegan meringue and macaroons.

It may be easy to just think of chickpeas as the main ingredient in hummus and not used for anything else. However, a savvy plant-based cook knows that chickpeas – and chickpea flour – can be used in meals throughout the day. It just takes a little bit of thinking outside the box!