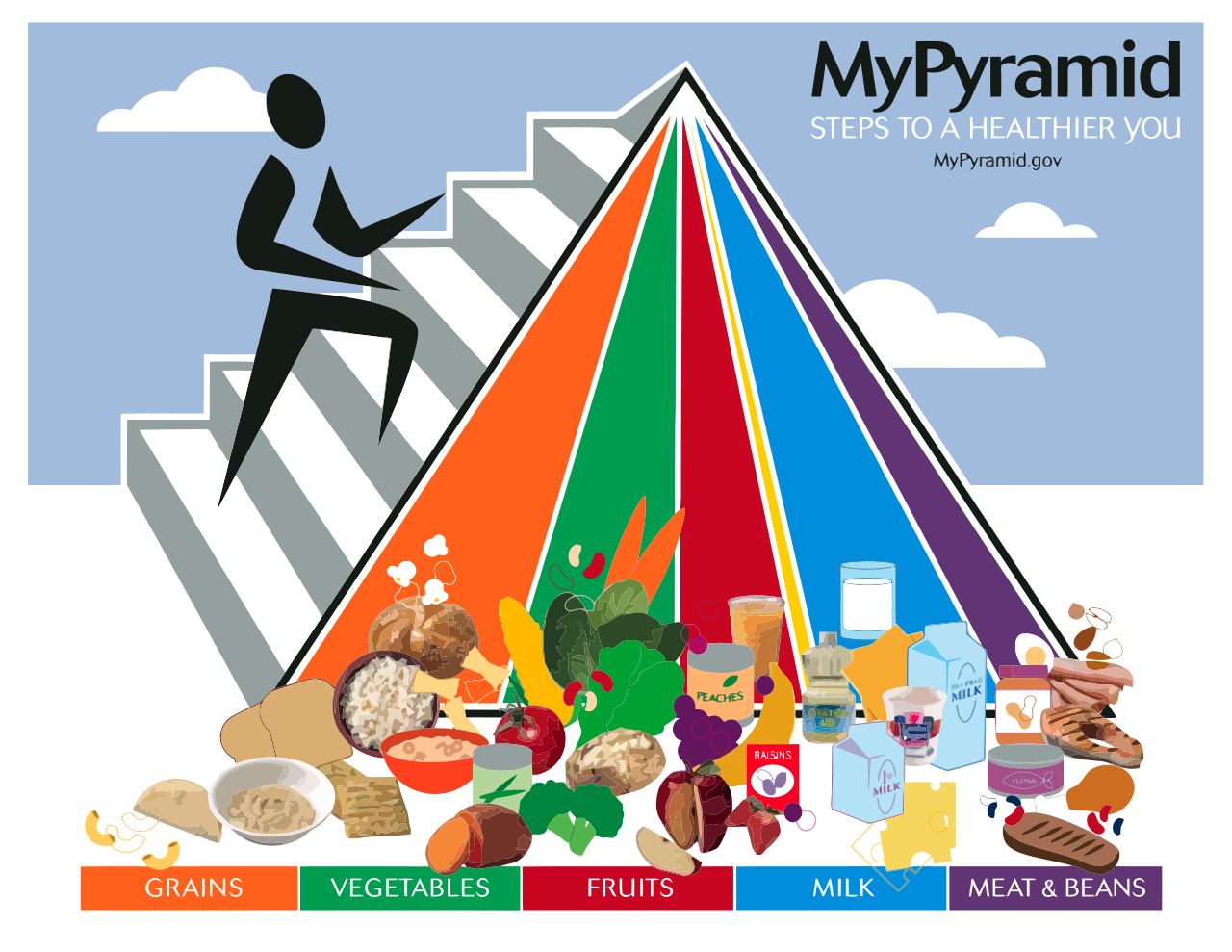 “How do you get your protein?” This common question is asked almost daily to many plant-based eaters, which brings us to the next question. Where did this protein myth originate? Or, better yet, where did any of our dietary guidelines come from?

One answer exists within the ever-shifting food pyramid. The U.S. Department of Agriculture has been making dietary recommendations for more than 100 years, the first of which were published in 1894, before specific vitamins and minerals were even discovered.

The first food guide you might be somewhat familiar with was known as the “Basic Four,” a model that recommended a minimum number of foods from four main groups including milk, meat, fruits and veggies, and grains, originally released in 1956 and used for the next two decades.

After a myriad of changes, the model shifted shape to arrive at the Food Guide Pyramid total diet in the 1980s. A corresponding graphic was released in 1992, with proportionality conveyed by the size of the food groups sections. The foundation of the pyramid was grains, followed by fruits and veggies on the next level, then animal-based proteins and at the top, moderated consumption of fats, oils, and sweets. Simultaneous to the food pyramid developments, in 1990, nutrition labeling was mandated.

In the last several years, the USDA has replaced the old pyramid, that is, the literal stacked representation about what you should eat, to a more navigable and true to form representation in the shape of a plate of food, housed at choosemyplate.gov.

Most notably, and specifically in regard to protein, the protein emphasis in the new model has been expanded to include soy products, nuts, seeds, beans, and peas. They even have a branched out section to include vegetarian choices, including the following standout statements:

“Vegetarians get enough protein from this group as long as the variety and amounts of foods selected are adequate.”

Although there still remains both myth and misconception when it comes to protein, as the plant-based protein emphasis continues to slowly expand, there continues to be the shift away from the idea that meat is a necessary player in the protein game.

In addition to food guidelines, and specifically the USDA’s pyramid shifting, there is the shifting food culture on a whole, despite lobbying on the other side. Between research that supports concerns regarding the environmental impact of factory farming and evidence tying the consumption of meat with increased risk for an increasing number of diseases in recent years, there continues to be a shift toward a new food culture, one that is not merely supported by plants, but more firmly rooted in plants and healthy eating on the whole. This can even be seen in bits and pieces across several centralized efforts supported through the USDA, including:

Let’s Move: One part of Michelle Obama’s campaign, dedicated to raising a healthy generation of kids, titled Let’s Move!, is eating healthy, focusing on food and nutrition. Included in this are tips for smart shopping for veggies and fruits to get what you need on a budget.

Know Your Food, Know Your Farmer: This particular effort was born out of a response to the growing interest of consuming food grown closer to home. Also known as KYF2, the mission of the initiative is to support the connection between farmers and consumers and strengthen the USDA’s support for local and regional food systems, to support the shift away from biting into your food blind. The project even supports an interactive map so you can view federally-supported projects fueling local food systems across the country.

The People’s Garden: What started in 2009 as an effort to challenge USDA employees to craft gardens in their facilities has expanded to become a nationwide community garden movement, and is represented amongst common efforts to inspire locally-spearheaded solutions to challenges facing our country. To be considered a people’s garden, each garden must first benefit the surrounding community, either offering a recreational space or harvest for local food bank or shelter, must be collaborative with a direct local tie to area organizations, and should incorporate sustainable practices.

Although there is still much more work to be done, and many complex issues in the world of food politics and policy (to say the very least), not to mention countless non-government initiatives that span far outside of the role and involvement of the USDA, on the whole, these positive shifts toward increasing both the awareness and understanding of the importance of sustainable practices, healthy, plant-based eating, and sourcing of food are all baby steps in a positive direction and ultimately a shift toward sustaining a food culture that we can live with, rather than one that is acting out against us.