Vegan Restaurants Are Taking Over America! 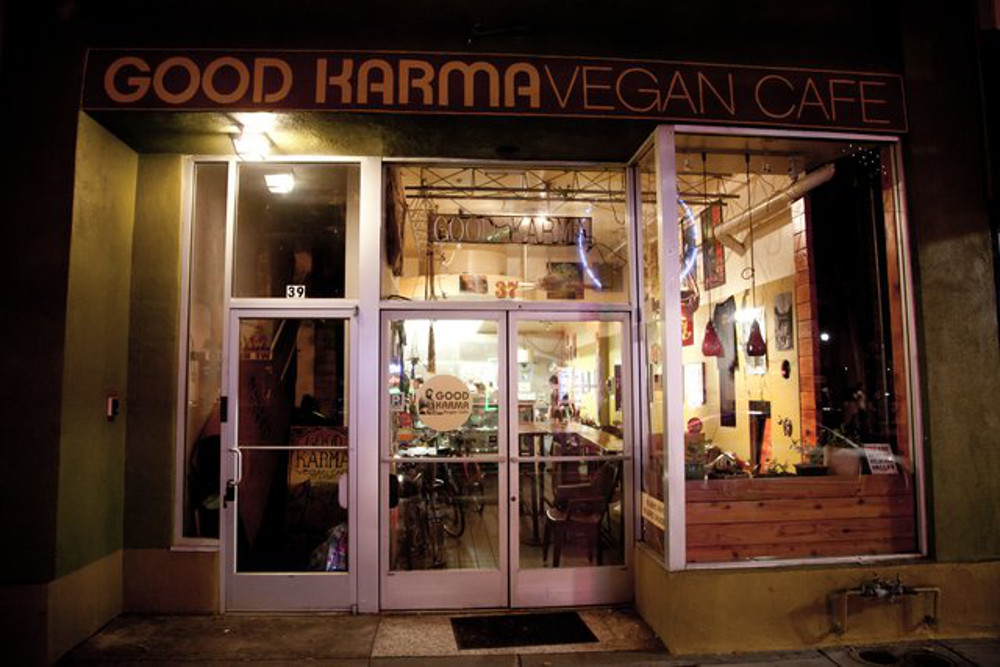 What’s that?! It’s a bird, it’s a plane, it’s….VEGAN RESTAURANTS!!! They’re landing everywhere and spreading their kale-based dishes to the masses. These restaurants talk about seitan like they are best friends, and what they can do with tofu will astound you! What do we do?!

Just give in, my Green Monster friends, embrace the plant-based movement and give it a try. The nooch awaits you!

In all seriousness, vegan restaurants really are making headway in America. We’ve seen this trend begin in the supermarket, when plant-based options like Gardein, Field Roast, and Daiya were gaining (and still are) in popularity. Vegan food start-ups are rapidly gaining not only popularity, but coveted market share.

According to celebrity chef Cat Cora, “Culturally, vegetable dishes are becoming the new normal …Vegetables are moving to the middle of the plate” via USA Today. That’s good news for the animals, the Earth, and your health! Nowadays, there’s probably a vegan restaurant (or at least some kickin’ vegan options) coming to a town near you.

The proof is in the pudding…vegan pudding

Yeah, I went there. Various surveys nationwide are demonstrating that the U.S. is ready to take it to the next level and embrace the plant-based lifestyle, or a least a salad now and then.

Buzztime reports, “According to Technomic, a leading research and consulting firm specializing in the food industry, 67 percent of Americans say that a vegetarian meal can be just as satisfying as a non-veggie version, and in a one-year period between 2012 and 2013, vegetable choices on nationwide restaurant menus have increased by 22 percent.”

Technomic’s “10 Trends for 2014” features the recommendation of “vegetarian alternatives, from mushrooms to beans to soy-based products like Gardein and Chipotle’s Sofritas” in reference to their number two trend of pushing the parameters of protein.

In another recent poll, when it comes to eating at a restaurant, CBS News reports that “more than half the 1,500 chefs polled by the National Restaurant Association for its new ‘What’s Hot in 2011′ list included vegan entrees as a hot trend. Vegan entrees came in at No. 71 out of 226 trends (beating out organic beer and drinkable desserts) – that’s far from No. 1, but evidence of veganism making inroads beyond urban strongholds like New York City and Los Angeles.”

So even if the restaurant isn’t fully vegan, people are starting to realize that this trend has staying power. People who may not label themselves as vegan, can still enjoy a nice plant-based entree, and restaurants are starting to deliver.

Even restaurants that you would not think to have vegan options are surprising us. Last year, Longhorn Steakhouse surprised pretty much everyone with its Brussels Sprouts Au Gratin side dish that USA Today says, “has emerged as its most popular side dish.” They plan to come out with a butternut squash risotto, and while neither of these options is entirely animal-free, it’s an impressive step for a meat-centric chain to feature a vegetable as the star ingredient in a dish.

Another casual American chain restaurant, Applebee’s, is jumping on the veggie bandwagon as well. They have created a “Grilled Artichoke Sirloin — with grilled artichokes, roasted tomatoes, onions and zucchini” which is testing for launch in the spring, says USA Today.

You can also easily order veg meals at places like Chili’s, Denny’s, or P.F. Changs…yum! Eat Drink Better provides a long list of many different options as does the Vegetarian Resource Guide.

Now there are some restaurants who embrace plan-based to the fullest! The two most well-known companies are Veggie Grill and Native Foods Cafe.

Veggie Grill offers plant based dishes like the Crispy Chickn’ Plate made with cauli-mashed potatoes, porcini mushroom gravy, and steamed kale. Yum! They currently have 16 locations over the country, and plan to double that number in the next 18 months. The LA times says the first new locations “are set to open in Los Angeles, Orange County, San Diego and Seattle.”

Native Foods Cafe was founded in 1994 out of Palm Springs, California. They have many locations in California, Chicago, Colorado, and Oregon. As of now, five new locations are set to open in 2014. In addition to awesome plant based food, all locations offer community events and free-to-the-public cooking classes.

Evolution Fast Food in San Diego, California is a 100 percent vegan fast food restaurant with a drive through! Their focus is heath, and they accomplish this by “using mostly organic – whole foods with no refined sweeteners, no high fructose corn syrup, no GMO ingredients, no artificial additives, flavors, preservatives, or colors, and NO CHOLESTEROL.”

In addition to providing a quick fix of your favorite veggie meal, vegan restaurants are reaching even higher levels of culinary cuisine. Enter, the high-end vegan restaurant!

According to one of the hottest vegan food trends of 2013, “Forbes recently listed High-End vegan as one of the ‘Top Food Trends of 2013,’ right up there amongst a number of carnivorous delicacies spanning from pastrami to lobster rolls. Perhaps you’ve paid a visit to the widely popularized, Blossom or Candle Cafe of New York City, Millennium of San Francisco, Calif., or one of the restaurants given kudos within the Forbes list, such as M.A.K.E. in Santa Monica, Calif.”

If you haven’t been able to visit one of these restaurants, here’s a sample of what’s in store. At Millennium, you won’t always find the same menu offerings because the restaurant is always evolving and adapting to new seasonal produce. You’d be welcome to dive right in and try the chef’s five course tasting menu, or try a staple like “Arborio Crusted Pumpkin – creamy cashew roasted garlic polenta, root vegetable, red wine, porcini & black lentil sugo, seared baby artichokes, fennel & kale with castelvetrano olives & lemon, chile & oregano hazelnut picada.”

Wow. These restaurants push the boundaries of vegan cuisine and challenge the widely held notion that vegan food is boring (even though it’s clearly not!).

The pressure is on

Americans want to eat healthy, and plant-based whole foods eating is an easy way to accomplish this goal. Making this type of food accessible to everyone is also an important step in moving this food revolution forward. Try out a new veg-option or local vegan restaurant, and sign your name on this petition to help urge McDonald’s to add a healthy meatless option.