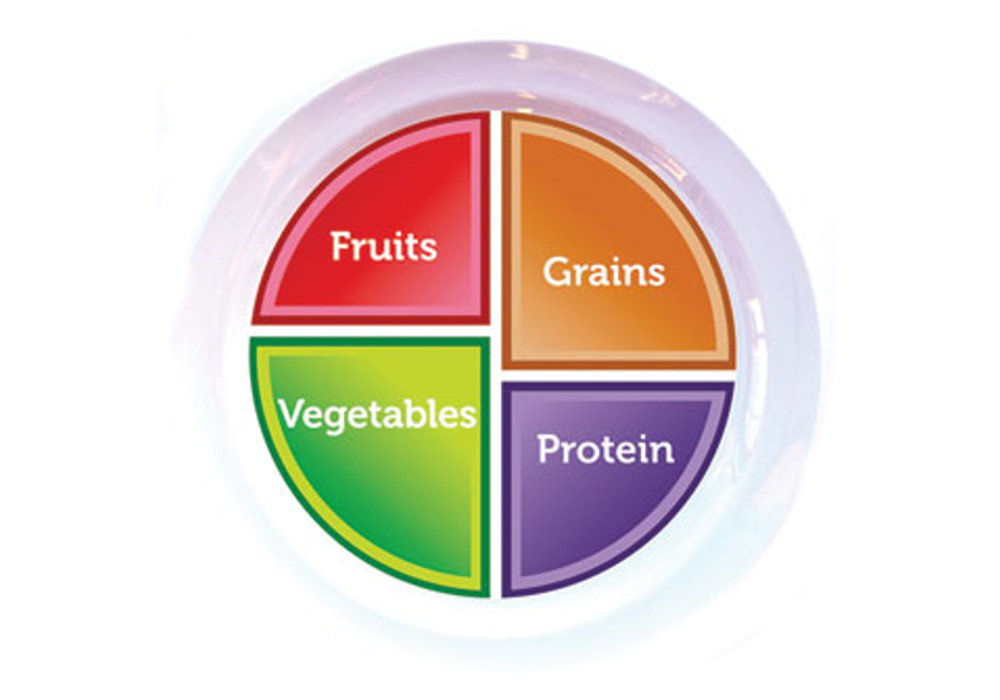 MyPlate is the USDA’s latest innovation to deal with the obesity crisis and overall declining health of Americans. The plate was launched in 2011 by First Lady Michelle Obama and Agriculture Secretary Tom Vilsack to serve as the government’s main food group symbol and as a healthful reminder to consumers. Although MyPlate is structured differently from the Food Guide Pyramid, the dietary guidelines are essentially the same.

The plate is composed of four unequal sections of vegetables, fruits, grains, and protein with a glass of “dairy” on the side. The protein section is generically labeled, with no direct indication of  “animal proteins” or “meat” being encouraged. However, in the explanation of the protein section, animal proteins are mentioned as options. The USDA’s MyPlate initiative may be a good idea at the start, but its inclusion of dairy and animal protein could be tweaked; what would it look like if the plate were revamped and tweaked to allow for a wholly plant-based plate for vegans?

The vegetable section of the MyPlate is not disputable for vegans unless the size of the section is taken into account. With a plant-based diet in mind, vegetables should easily make up half of the plate, not a fourth. The two and a half recommended cups should be three or four cups. Vegetables provide vitamins and minerals as well as a significant amount of protein, so you can satisfy your protein as well as your vegetable requirements.

Fruit is not debatable either; it is a fantastic work of nature. The MyPlate says to consume two cups of fruit every day which translates to about two apples a day. Plant-based lifestyles usually include more fruits than that, but two cups is a sufficient amount, albeit on the low end of the spectrum.

Grains can be beneficial to your daily diet, and the MyPlate recommends eating six ounces of whole grains a day. While some  prefer to eliminate grains in favor of legumes, nuts, and starchy vegetables however, others weigh too heavily on them and consume well beyond the recommended amount. Considering “all grains have nutritional deficiencies” and could contribute to autoimmune reactions or metabolic dysfunction,  grains need to be balanced out with an adequate amount of vegetables and fruits as well as some sort of protein source, hence its placement and size (six ounces or 3/4c) on theMyPlate. According to MyPlate guidelines, one ounce counts as one slice of bread, but eating six slices of bread is not a good idea. Vegans and omnivores alike need to be wary of the amount of grains they consume and choose unprocessed and whole grains whenever possible.

On the MyPlate website, the following statement quantifies the protein section of the plate: “Eat a variety of foods from the protein food group each week, such as seafood, beans and peas, and nuts as well as lean meats, poultry, and eggs. Twice a week, make seafood the protein on your plate. Choose lean meats and ground beef that are at least 90% lean. Trim or drain fat from meat and remove skin from poultry to cut fat and calories.” The presence of beans, peas, and nuts as a protein source does seem like sensible nutritional advice, but the dismaying sentence about adding seafood twice a week does not. Because of the high levels of mercury present in fish, and the alarming facts in this recent report, seafood should not be eaten regularly, if at all consumed.

Dairy is a part of the MyPlate requirements, but it is not needed for a healthful diet, according to Dr. T. Colin Campbell. The key consumer message for the inclusion of dairy is for consumers to switch their milk to fat-free or 1 percent low-fat, but that does not solve the problem. The main protein in dairy, casein, poses as a potent carcinogen. Milk and all of its derivatives need to be eliminated from the mainstream diet. Calcium is the main nutrient dairy has going for it, but calcium in vegetables like broccoli and kale are readily metabolized. If you must have a glass of milk, try a non-dairy milk like coconut, hemp, hazelnut, oat, cashew, or almond milk instead; just avoid carrageen, a common additive to milk substitutes.

The USDA’s MyPlate recommendations are not too outlandish or nutritionally appalling: with a few adjustments here and there, they can be molded to fit the requirements for vegans and plant-strong eaters alike.