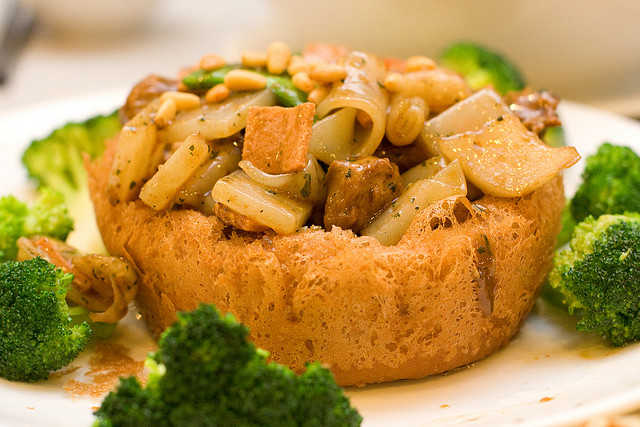 Those uninitiated to the serenity of a vegan lifestyle often look at me (and my 12 years vegan) with a mixture of pity and incredulity. Especially with the holidays and heavy-duty feasting coming up. “You don’t eat meat, poultry, seafood, or even dairy!? I could never live on leaves.”

A lot of us vegans, who have heard a million variations of this, just smile. The truth is: my diet is a lot more varied since I became a vegan. I’m eager to try new vegetables and fruits and grains. Thinking outside the bun allows me to dip into the cuisines of different geographical regions and traditions. I’m quite sure I never bit into a luscious lingonberry or a savory seitan picatta while I was still an omnivore.

But, every once in awhile, I do crave the old stand-bys from my childhood, or an artfully-presented dish from mainstream American culture. While I would never be caught dead eating a chicken chimichanga again, the memory of one served by a mall restaurant back home can sometimes flood me with paralyzing nostalgia and longing.

So what’s the eco-conscious, humane eater to do? There’s an alternative for that! The words “faux” and “fake” on a food carton, as you transition anyway, can be your best friend.

There are lots of meat substitutes (primarily utilizing soy or seitan) that taste identical to the original, or better. Burgers, bacon strips, chicken nuggets, sausage, taco meat… the list is endless. A personal favorite of mine is Field Roast. The name kind of sounds like coffee, but this brand is definitely main meal material. There are country-style cutlets, fancy pates, and old-fashioned meatloafs, among other vegan delectables.

On the dairy side, we have mouth-watering soy and almond milks. For the longest time, though, vegan kitchen whizzes just couldn’t make something that looked and melted and tickled the taste buds like cheese. Ersatz mozzarella tasted, instead, like rubber. Those days are now gone forever, thanks to Daiya. Though I don’t have any stock in the company, I hope it soon takes over veggie pizzas and lasagnas everywhere.

Another product for which we had to wait forever was a cruelty-free marshmallow. If one was in a splurging mood and willing to overlook the multiple kinds of sugar (corn syrup, dextrose, cane sugar…) that went into a typical marshmallow, there was still that pesky gelatin that stopped us cold. (Gelatin comes from collagen which is found inside animals’ skin and bones…which is not too appetizing!) But then along came sweet Sara from Sweet & Sara. Somehow she concocted a vegan marshmallow that is making my mugs of hot cocoa much happier these days.

Speaking of sweets, I was itching to try an edgy food fad that began a year or so ago: bacon in chocolate. Based upon a very limited and biased test (which I have conducted by asking friends for their reaction to the words “bacon in chocolate”), I can now conclude that most people take to this idea in one of two ways. They are repulsed, or they are intrigued. I fell into the latter category and really wanted to sample it, but not in its death-dealing form. So, I worked with Jean Francois, the award-winning chef behind Rescue Chocolate’s vegan bars and truffles, and came up with the Fakin’ Bacon bar. I gotta say it’s good, and thank you to all the adventurous gourmands out there who have been buying it off the shelves.

Here’s hoping that your holiday celebrations are laden with yummy vegan goodness. May you enjoy a tantalizing Gardein Stuffed Turk’y on Thanksgiving, Silk eggnog on Christmas, and Tofutti sour cream on your Hanukah latkes. And a compassionate bon appétit to all!