The Best Quick Soups to Keep You Warm Through the Winter 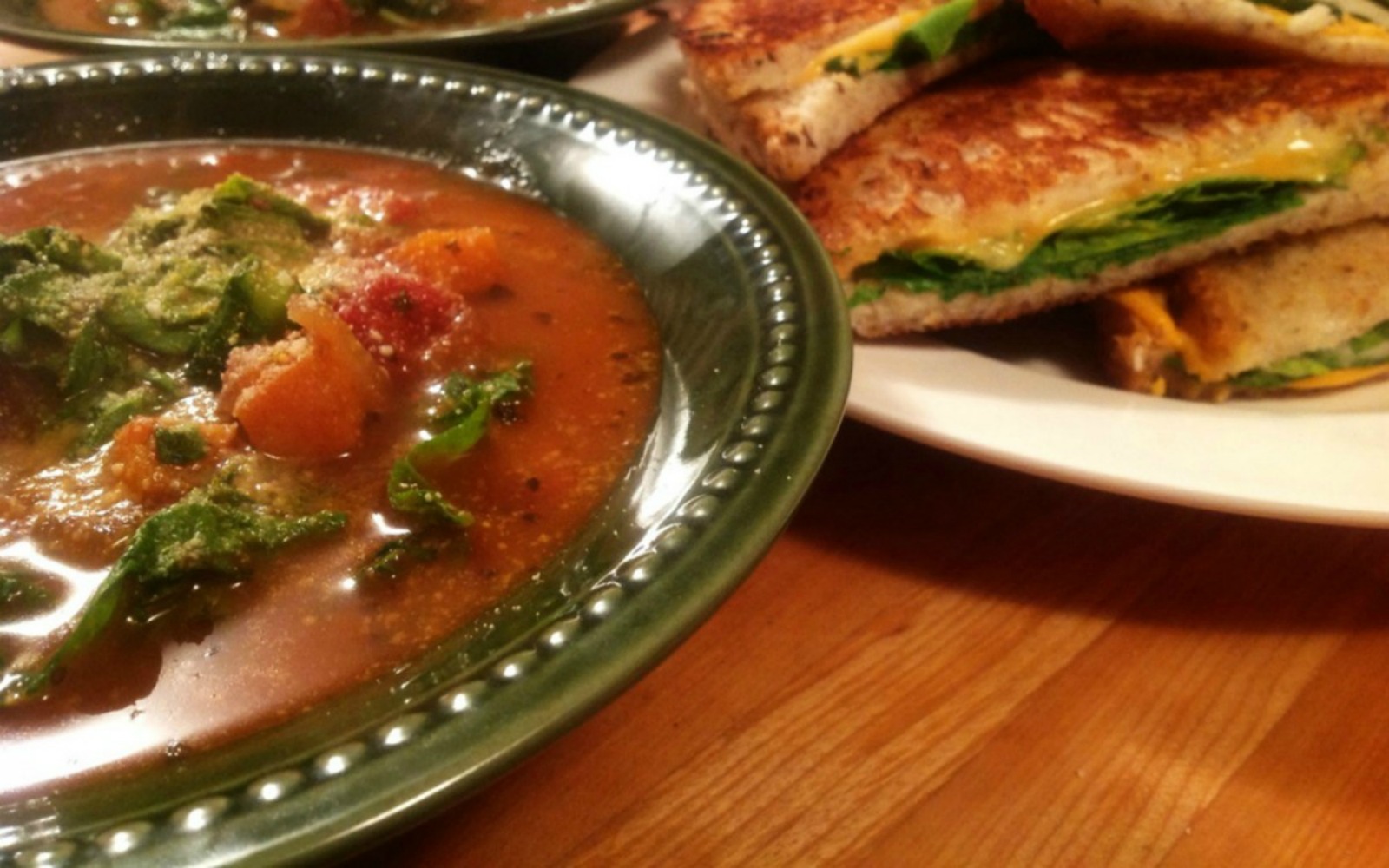 When you get home and you’re cold and hungry, nothing is better than sitting down to a hot bowl of soup. But if you don’t have soup already made, waiting in the fridge to be warmed up, you may think it takes too long to cook up a fresh pot. The good news is that’s not true. While soup does taste better the longer it cooks, and even better the next day, you can make a full-flavored, hearty soup in about half an hour. Plus, most of the cooking time for soup is hands-off which gives you time to make a sandwich or slip into your coziest sweats or pajamas. Soup is just what everyone needs in the cold winter months. You can have a quick, healthy and comforting bowl of soup sitting in front of you before you know it. Here are some ideas for the best quick winter soups. Bet you feel warmer just reading about them. 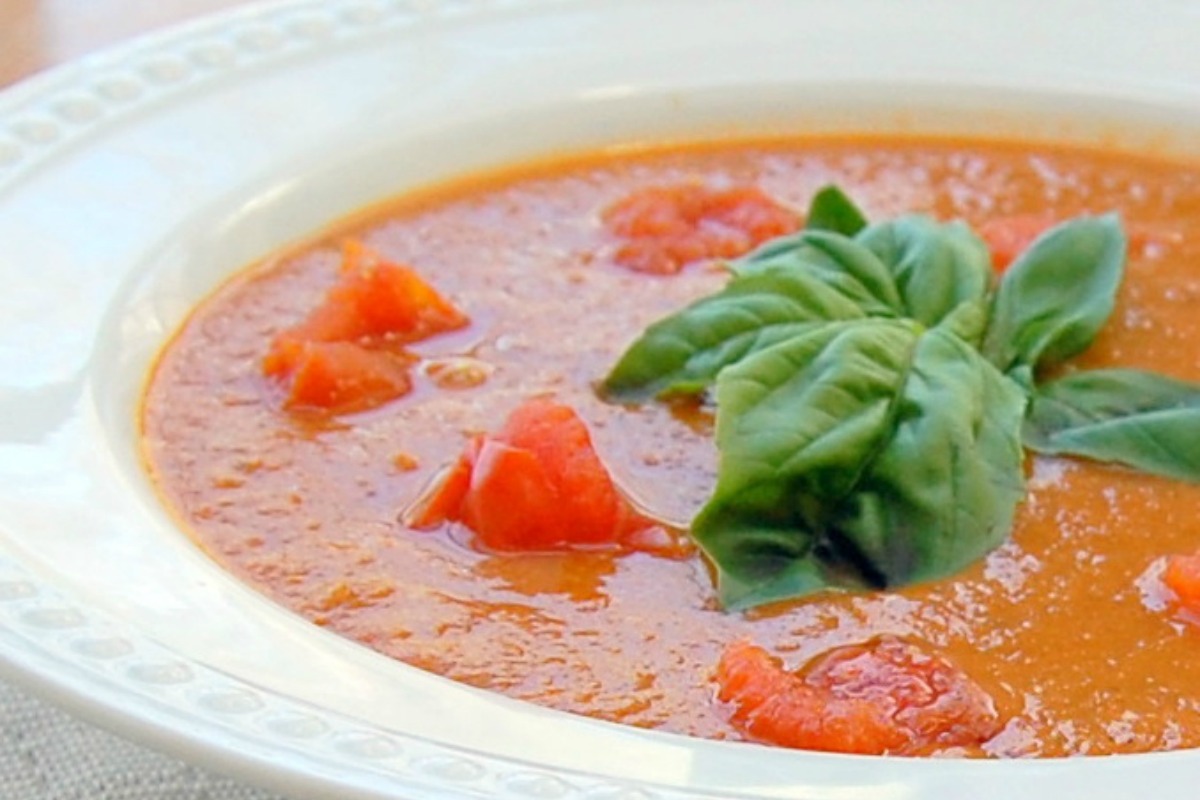 Does anything say comfort more than a bowl of tomato soup with a grilled cheese sandwich?  My Hug in a Mug Tomato Soup is so comforting to have on a cold day. Just holding a hot mug of it in my hands makes me feel warm and cozy. Like a hug in a mug. Of course it’s delicious in a bowl too. To make it: heat 1 Tbs. vegetable oil in a Dutch oven or large pot over medium-high heat. Add 1 large chopped onion and cook for 3 minutes until it starts to soften. Add 3 chopped stalks of celery and 2 chopped carrots and let cook for 4 minutes until they start to soften. Add 4 minced cloves of garlic and stir the vegetables. Add 28 oz. crushed tomatoes and 15 oz. diced tomatoes to the pot and stir in 1 tsp. dried basil, 1 tsp. dried oregano, 1 tsp. kosher salt, ½ tsp. black pepper and 1 bay leaf. Add 6 cups vegetable broth to the pot. Stir and bring to a boil. Then reduce the heat to low, cover the pot and let the soup simmer for at least 20 minutes. Remove the bay leaf.  Serve while hot, preferably with a vegan grilled cheese sandwich. 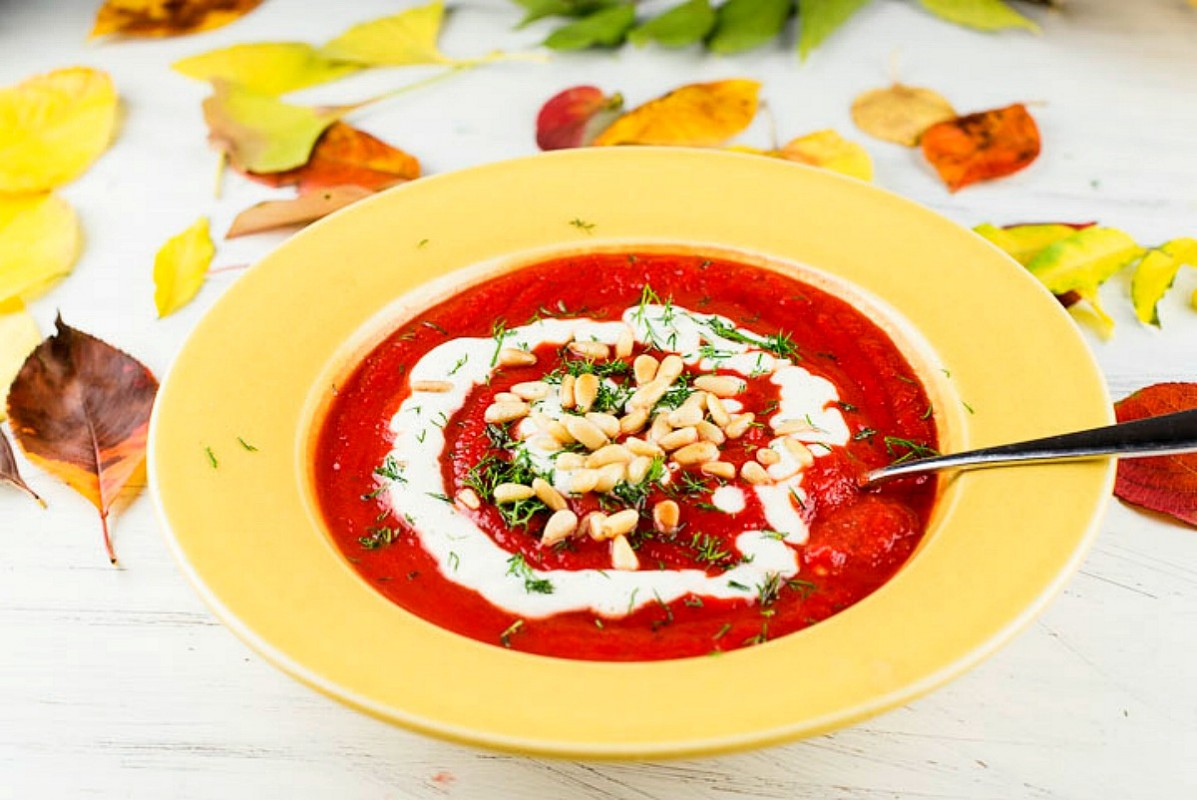 Take advantage of the abundance of winter squash to make soups that are creamy and satisfying. My Curried Pumpkin Soup is spicy but balanced with sweet apple sauce. Saute 1 diced medium onion in a soup pot for 4 minutes or until translucent. Add 4 minced garlic cloves, 1 Tbs. fresh grated ginger, 1 Tbs. curry powder and 1 tsp. ground cinnamon and mix to combine. Add 1 ½ cups pumpkin puree and 1 cup unsweetened apple sauce. Stir to combine and cook for 3 minutes. Add 4-6 cups low-sodium vegetable broth, ½ tsp. kosher salt and ¼ tsp. black pepper. Let the soup come to a boil and then reduce the heat and let it simmer for 20 minutes. Transfer the soup in batches to a blender or use an immersion blender to blend the soup until it is silky smooth. Add 1 cup coconut milk and mix to combine. Heat the soup until it is warmed through. Taste for any seasoning adjustments and serve hot. 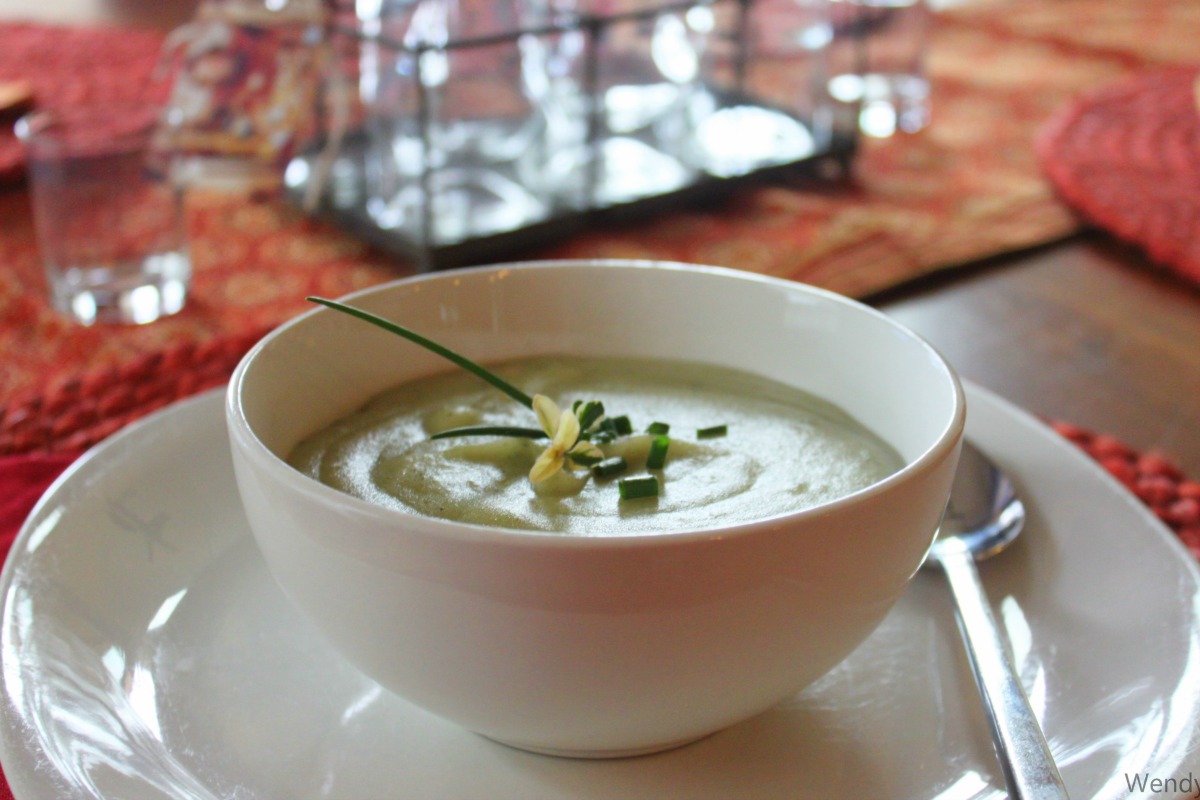 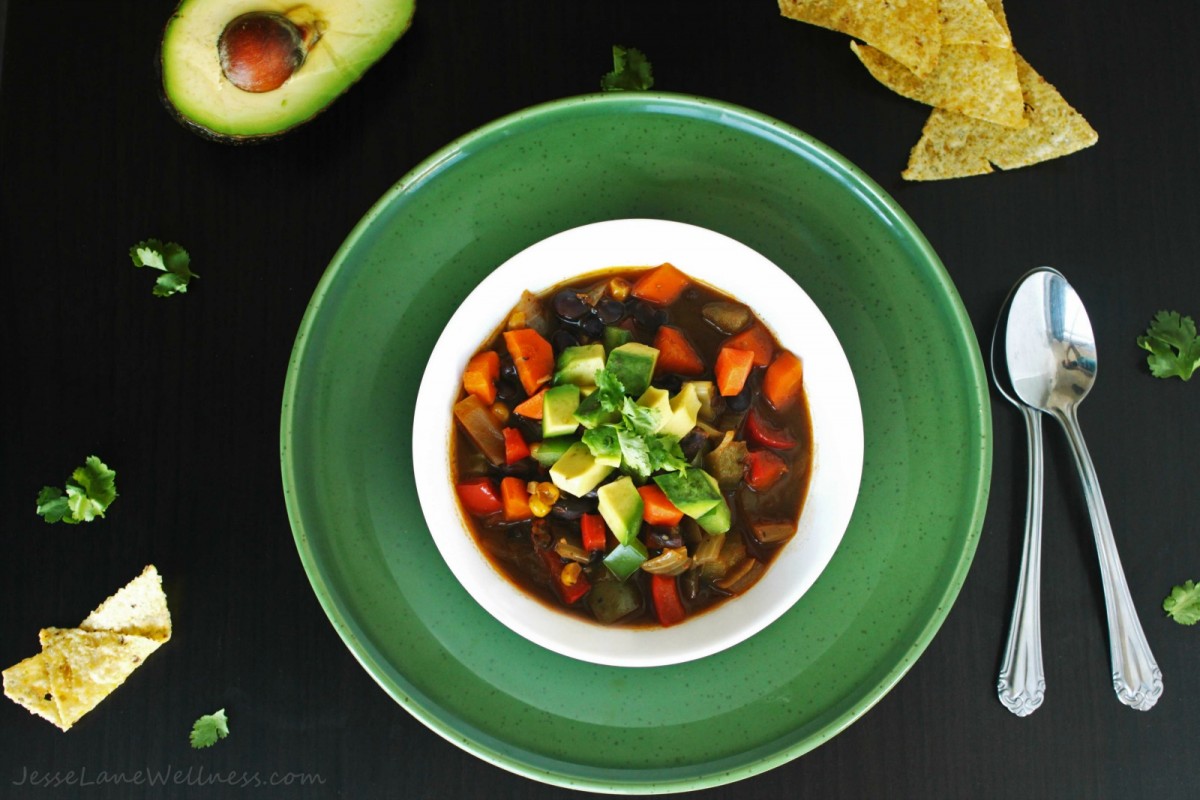 Beans are one of the best ingredients. They are economical, easy to store and easy to prepare in so many ways. Beans soups are hearty and satisfying and will definitely warm you up on cold nights. When the weather gets cold, I want to make soup that is hot – both temperature hot and spicy hot.  That’s when I make my Spicy Black Bean Soup. To make it: Heat 1 Tbs. oil in a large soup pot over medium-high heat. Add 1 large diced onion and let cook for 5 minutes until softened. Add 1 large diced carrot, 1 diced Yukon gold potato and 6 cloves minced garlic and let cook another 5 minutes. Add 4 oz. diced green chiles and 2 cups diced tomatoes and stir to combine. Mix in 1 tsp. each ground cumin, ground coriander, dried oregano, and smoked paprika, ½ tsp. black pepper and a fresh bay leaf. Don’t add any salt now since the flavors will intensify as the soup cooks. Add it at the end. Add 3 cups cooked black beans to the soup and then 6 cups low-sodium vegetable broth. Cover the pot and bring the soup to a boil.  Then remove the lid, lower the heat and let simmer for at least 30 minutes. The longer it cooks, the more the flavors will intensify. Before serving, taste the soup to see if it needs salt. Add 2 Tbs. fresh chopped cilantro and remove the bay leaf. Serve in bowls topped with vegan sour cream, avocados or tortilla chips. 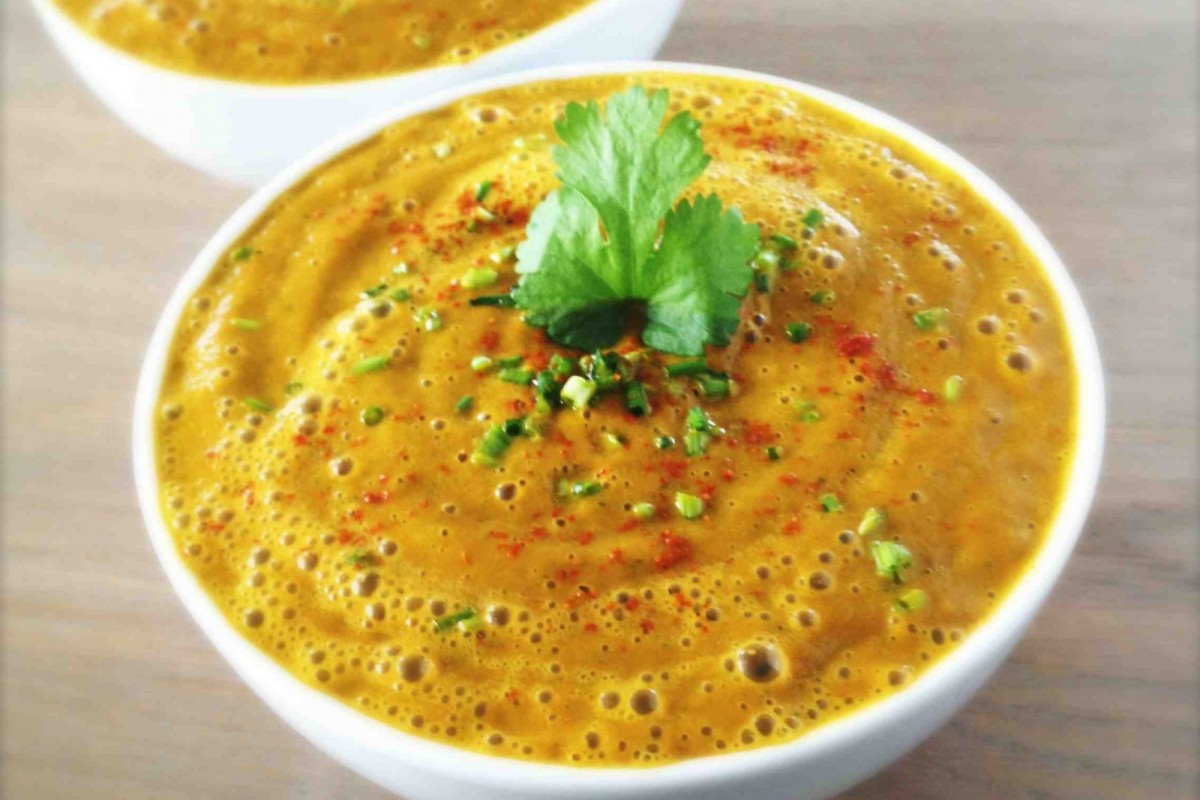 You can make soup from pretty much any vegetable there is. The soup can feature one specific veggie or be filled with a bunch of different ones. It can be smooth and creamy or chunky. The possibilities are endless. My Indian Vegetable Soup is hearty with an Indian twist. To make it: add 2 tsp. vegetable oil to a large pot and heat over medium-high heat. Add 2 chopped onions and cook for 4 minutes until softened a bit. Add 2 chopped carrots, 2 chopped red potatoes, 1 diced zucchini and 1 diced yellow squash to the pot. Let cook 8 minutes until the veggies soften. Stir in 6 cloves of minced garlic. Add 2 Tbs. curry powder, 1 tsp. ground coriander, 1 tsp. ground cumin, 1 tsp. garam masala and ½ tsp. kosher salt. Stir and cook until fragrant. Add 6 cups vegetable broth or water and bring to a boil. Reduce the heat to medium-low and add 2 cups cauliflower florets. Cover the pot and simmer, about 20 minutes. Garnish with 3 Tbs. fresh chopped parsley or cilantro. Serve while hot. 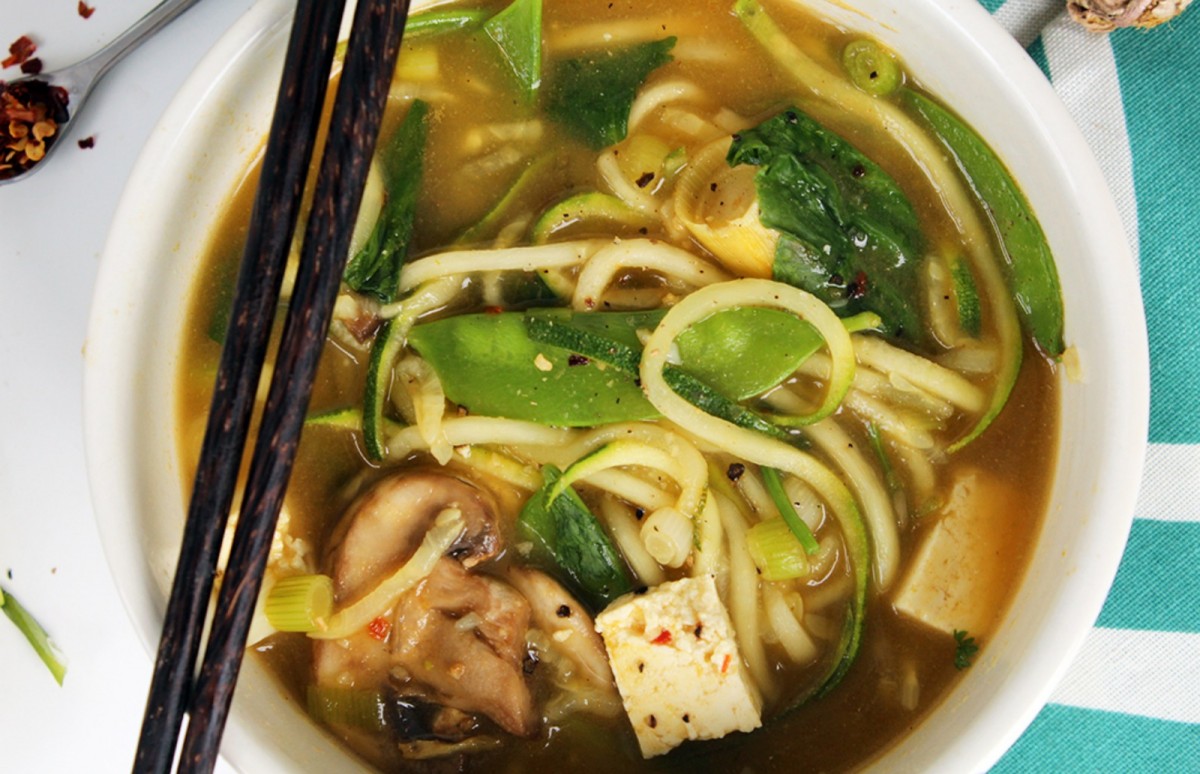 Thinking about a hot bowl of noodle soup brings back so many childhood memories. You can relive those comforting times with a bowl of noodle soup that is completely plant-based. When I feel a cold coming on, I believe that eating ginger and garlic in large doses will help me fight off whatever ills may be brewing. At least that’s what my mother always said. My Garlic and Ginger Soup with Noodles will fight off any cold: in a large saucepan, combine 2 vegetable bouillon cubes and 6-8 cups water or add 6-8 cups of vegetable broth over medium-high heat. Add ½ of a chopped onion, 3 sliced carrots, 3 chopped celery stalks and 4 oz. sliced mushrooms to the broth. Mix in 4 cloves of minced garlic, 1 Tbs. fresh minced ginger, 1 tsp. dried oregano, 1 tsp. kosher salt, 1 tsp. kelp or dulce flakes, ½ tsp. celery seed, ½ tsp. dried dill, ½ tsp. ground turmeric, and ½ tsp. black pepper. Bring soup to a boil and then reduce the heat to low and cover the pot. Let the soup simmer about 15-20 minutes to develop its flavor. Right before eating, return the soup to a boil and add 8 oz. noodles to the pot. Let cook according to the package directions or until the noodles are al dente. Taste the soup for seasoning adjustments and serve while hot. 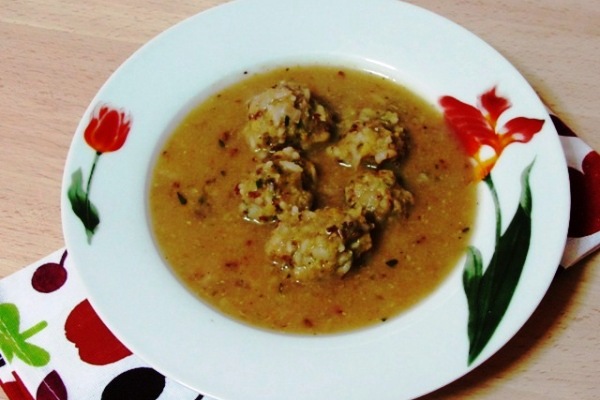 Some soups are so hearty, they are more of a meal. You might need a fork as well as a spoon to eat them. By adding tofu, tempeh, seitan or other “meaty” vegan foods, you also add a ton of protein and the soup will be even more satisfying. One of my favorite soups is Caldo Verde or Portuguese Kale Soup. Caldo Verde is Portuguese for “green broth” and is often served at Portuguese celebrations. Caldo Verde typically contains potatoes, onions and kale. In my interpretation of this soup, I used all these ingredients plus cannellini beans and vegan sausage for added heartiness and yumminess. To make my Caldo Verde: in a large pot, heat 1 Tbs. of oil over medium-high heat. Cut 4 links of vegan sausages into coins and add them to the pot. Cook them until they are just browned on both sides, about 5 minutes. Remove the sausage from the pot. If the pot is dry, a 2nd Tbs. of oil. Add 8 halved Yukon gold potatoes and 1 large chopped onion. Cover the pot and let cook for 5 minutes, stirring occasionally. Add 4 cloves minced garlic, 2 fresh bay leaves and 6 cups chopped kale to the pot. Cover and let cook for 2 minutes or until the kale starts wilting. Add 1 ½ cups cannellini beans, 2 cups diced tomatoes and 6 cups vegetable broth. Add salt and black pepper to taste. Bring the soup to a boil. Reduce the heat to low, add the sausage back in (whatever’s left of it), cover the pot and let simmer about 15 minutes or until the potatoes are fork-tender. Taste for seasoning. Serve hot, preferably with crunchy bread for dunking.

Other soups that have a little something extra include this Vegan Tempeh and Turnip Greens Soup, Curry Chick’n and Gnocchi Soup, Greek Meatball Soup, and Roasted Garlic, Miso and Greens Soup.

Also, make sure to check out Here’s Our Ultimate Guide to Vegan Soup Recipes! for all of our favorite soup recipes!

A hot bowl of hearty, warming soup can be yours in no time. Forget the take-out and the frozen dinners. The next time the wind chill has you shivering, whip up a quick winter soup that will make you feel warm all over.

Lead Image Source: 10 Easy Vegan Recipes Everyone Should Know…Yes, EVERYONE!