Glazed Doughnuts for One
[Vegan, Gluten-Free] 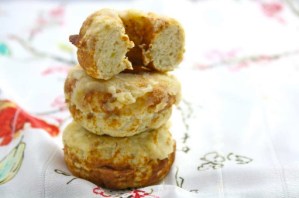 Glazed Doughnuts for One [Vegan, Gluten-Free]

Yes, I was that kid. I was that kid who went to the bake sale, not entirely to support the cause (sorry, Boy Scouts), but to get an excuse to hoard Krispy Kreme Donuts. Don’t judge me. Come on… like you didn’t do that too. I knew it. See, this is one of the many reasons we’re friends. Krispy Kreme hoarders all the way. But losing weight began to present an issue to my overwhelming donut addiction. I had to go cold turkey…er, donut. Yes, I went cold donut. This continued up until yesterday, when something occurred to me: You want donuts? Fine! Get off your behind and make your own. Sometimes I need a friendly kick from my subconscious to get into to gear. And into gear I got. I fired up my trusty steed (or donut maker, as you sane people may know it as), and made me some donuts. How did they turn out? I inhaled them all. At once. In fact, I ate them so quickly I had to make another batch just so I could get some photographs. The result is fluffy yet dense, not so much like the traditional Krispy Kremes of my childhood donut hoarding days, but absolutely fantastic in their own right And the fact that they just happen to be single serving, gluten free, grain free, low carb, high protein, nearly fat free, only about 110 calories, super easy, and have a vegan option, and a HUGE serving size (four donuts!) doesn’t hurt either. Why are you still sitting here? Healthy Krispy Kremes for One Note: These are super delicious, but the flavor really depends on whether you choose applesauce or mashed banana. They’re both great, but I personally prefer banana (it makes them almost like banana bread donuts!). If you prefer applesauce, then go with that. Pumpkin also works, but it makes the donuts rather orange. Yay for awareness!

Glazed Doughnuts for One [Vegan, Gluten-Free]