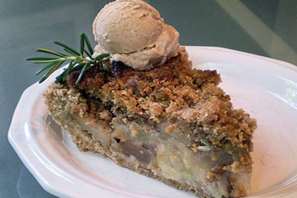 To my way of thinking, Harry and David, purveyors of gourmet foods, have almost single-handedly rendered pears one of the most sought after gifts of the holiday season. And it has something to do, not only with the glorious fruits themselves, but with the way they single out one pear in each box to carefully wrapped in golden tissue. So, while I appreciate the purity of a raw pear, I still like mine baked up in a pie well beyond the holidays. Yet, patience is not one of my virtues, and fruit pies can take an hour or more to bake. So, in my version, the crust is pre-baked and the pears precooked stovetop so that the assembled pie bakes in the blink of an eye: a mere 15 minutes. Plus, my coconut oil-based pie crust is so flaky and delicious you almost don’t need the filling. But only almost. The pear filling is set off perfectly with a fresh ginger streusel and pairs beautifully with my Cinnamon Stick-Vanilla Bean Ice Cream (recipe below). As an added bonus, the pie bakes in the blink of an eye because the pears are pre-cooked for a few minutes stovetop.