How to Celebrate Purim Vegan-Style 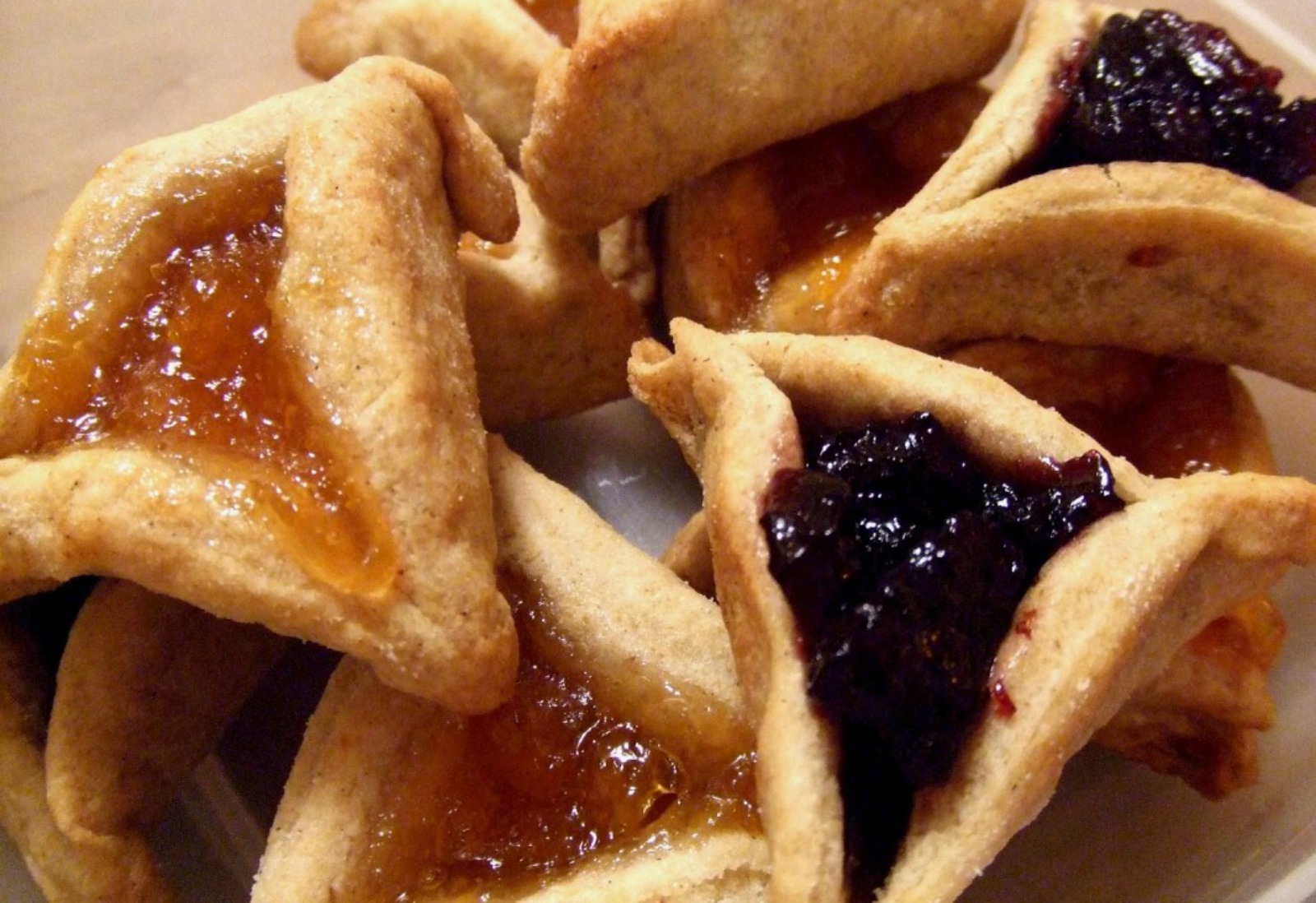 Purim is the Jewish holiday that celebrates the survival of the Jews in ancient Persia. We read the biblical Book of Esther, or the Megillah, which tells the story of how Esther saved the Jews from annihilation at the hands of the wicked Haman, an advisor to the king. Haman hated the Jews because Mordecai, Esther’s cousin, would not bow down to him. So Haman plotted to destroy the Jewish people by convincing the king that these people followed their own laws rather than the king’s and were therefore, a great threat. The king left the fate of the Jews to Haman who planned to exterminate them all. Esther became part of the king’s harem and he loved her so much, he made her queen. She was able to use his love for her to save her people from Haman’s evil plot. The Jewish people were saved and Haman was killed instead.

Purim is a happy holiday that is celebrated with costumes, parades, plays, giving of charity, food gifts and festive meals. Of course, there are many customs that involve food. It is tradition to have a Purim feast called a seudah on Purim day. This feast follows a fast that is symbolic of the days Esther fasted and prayed while she gathered the courage to approach the king, unsummoned, about saving her people. It is believed that while Esther lived in the palace, she ate only vegetarian food in order to avoid eating any non-kosher food. Many people follow that example and celebrate Purim with dishes made with vegetables, nuts, seeds, grains and legumes. It only makes sense to celebrate a holiday that is about a people escaping slaughter with a compassionate menu. Here is a guide on how to celebrate the happy festival of Purim vegan-style. 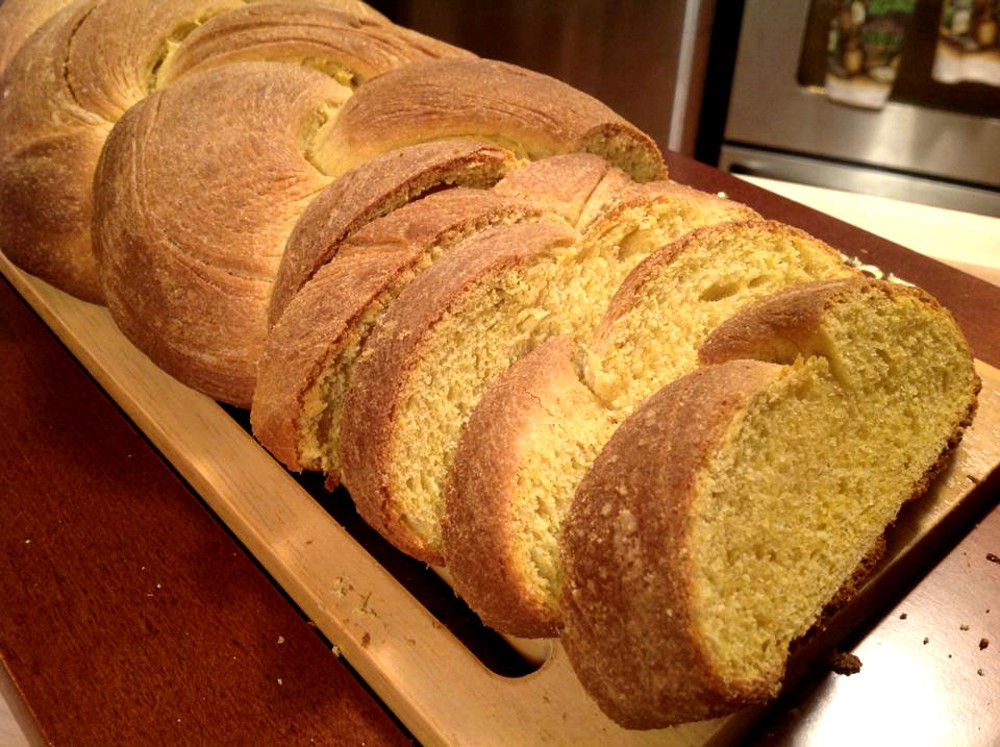 One custom is to serve an especially long, braided challah in memory of the rope that was supposed to hang Mordecai but hanged Haman instead. You will definitely be in the mood to celebrate when you make this Vegan Challah or this Hot Pretzel Challah Bread. If you are gluten-free, we have you covered. Celebrate with this Vegan and Gluten-Free Challah. 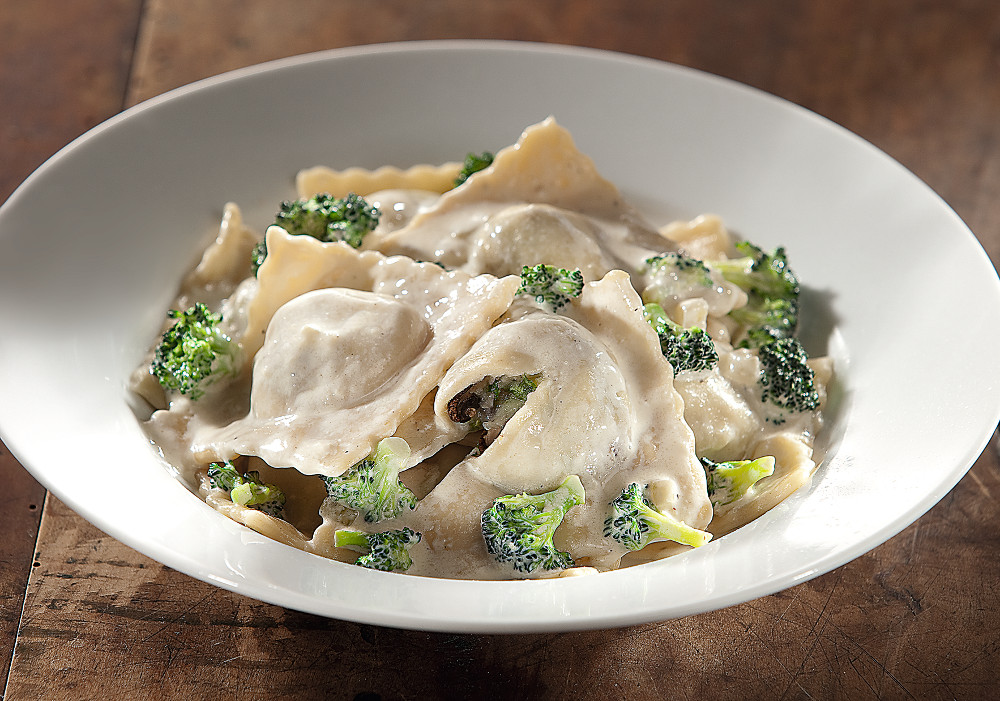 Another traditional food served on Purim is kreplach. Kreplach are small noodle dumplings filled with meat or potatoes. They are usually boiled and served in soup. They are similar to won tons and pierogis. Kreplach and other stuffed foods are eaten on Purim to symbolize the surprises and secrets meanings inside the Purim story. Another theory is that the chopped and beaten food in the center of the dumplings represents the beatings inflicted on people at that time and the tradition of “beating out” the name of Haman by making noise and stomping feet during the reading of the Megillah. Other explanations surround the triangular shape of the dumplings to symbolize Haman’s hat and/or the Jewish patriarch of Abraham, Isaac and Jacob.

Whatever the reasoning, kreplach taste a lot better than their name implies. Making kreplach is exactly like making ravioli or Chinese dumplings. Fill them with potatoes, vegan “beef” crumbles or lentils. To make Lentil Kreplach: add 1 ½ cups lentils and 3 cups water to a medium saucepan. Bring to a boil and then reduce the heat to a simmer. Let the lentils cook until the water is absorbed and the lentils are soft and mashable. Drain the lentils in a colander to remove any excess water. Using a potato masher, mash the lentils until there are just a few left intact. Heat 1 Tbs. vegetable oil in a large saucepan (that has a lid) over medium-high heat. Add the mashed lentils to the pan and cook them until they are browned, about 5 minutes. Use a wooden spoon to break them up and toss them around the pan. When the lentils are browned, add 1 minced onion, 1 minced bell pepper and 3 minced garlic cloves to the pan and toss to mix with the lentils. Cook about 5 minutes until the veggies have softened. Mix in 2 Tbs. tomato paste and 1 Tbs. vegan Worcestershire sauce. Make sure all the veggies are coated and that the tomato paste smells fragrant. Add in 1 tsp. dried oregano, 1 tsp. paprika, a pinch of red pepper flakes and kosher salt to taste. Cover the pot and cook on low heat for 5 minutes and then remove from the heat and let cool.

Prepare the dough by combining 2 cups all-purpose flour, ½ cup water, 2 tsp. olive oil and ¼ tsp. kosher salt in a large bowl. Knead until the dough is smooth. Cover the bowl with plastic wrap and let the dough rest for 10-15 minutes. Transfer the dough to a clean surface. Roll the dough into a log. Cut the dough into 10 equal pieces. Press each piece into a disc and using a rolling pin, roll each piece into a circle about 3 inches in diameter. Make them as thin as you can. If you are not going to use them immediately, coat them with flour and store in the fridge or freezer. Place about 1 Tbs. of the lentil filling in the middle of each circle. Use your finger to wet the edges of the wrapper with water. Fold the wrapper over the filling and press the edges together, forming a sealed half-circle. Transfer the dumpling to a plate lined with parchment paper. Continue until you fill all the dumplings. Carefully drop the kreplach into a pot of salted boiling water. Cook for a few minutes and remove from the water. You can eat them boiled, in soup or fry them in a pan.

Other dumpling recipes work just as well. Try these Vegan Russian “Meat” Pierog and Beet Salad, Perfect Steamed or Fried Dumplings, or Potatoes and Porcini Mushroom Ravioli in Broccoli Cream Sauce. See even more dumpling recipes in Around the World in 7 Vegan Dumplings and be sure to look at 6 Traditional Purim Recipes Made Vegan. 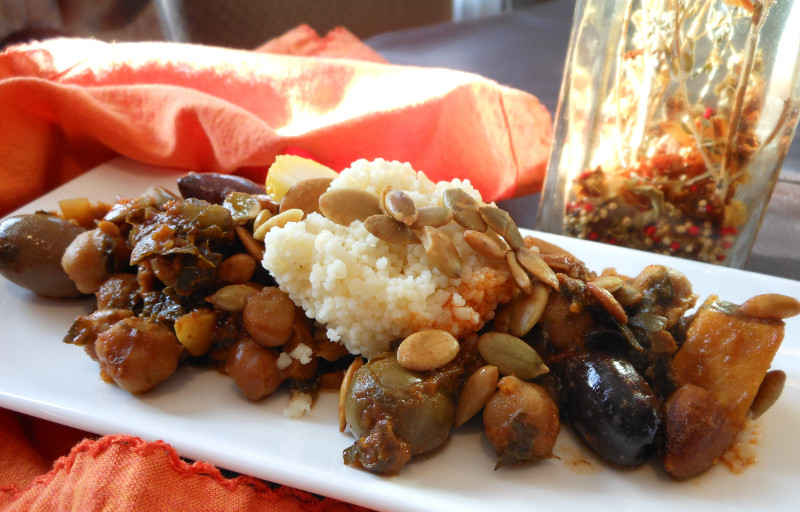 As mentioned, eating beans and legumes is another way to honor the way Queen Esther ate at the palace. There are many delicious dishes based on beans, lentils and peas to feast on. Start your meal with a warm bowl of my Chickpea Noodle Soup: heat 1 Tbs. oil in a large soup pot over medium heat. Add 1 chopped onion and saute for 4 minutes until they are softened. Add 3 chopped carrots, 3 chopped celery stalks and 4 minced cloves garlic. Saute for 5 minutes until the vegetables just start to become tender. Throw in 2 vegan “chicken-flavored” bouillon cubes and break them up with a wooden spoon. Mix in 1 tsp. dried oregano, 1 tsp. dried parsley and ½ tsp. dried dill. Add the water, raise the heat to high and bring to a boil. Then reduce the heat, partially cover the pot and let simmer for at least one hour. Add salt and pepper to taste. Add 4 cups cooked chickpeas to the soup and allow them to cook until warmed through. If you are cooking the noodles in the soup, bring the soup back to a boil. Add 8 oz. noodles to the pot, stir and let cook until the noodles are al dente, about 10 minutes. You can alternately add cooked spaghetti to the individual bowls when serving. Other soups to serve include this Hearty Two-Lentil Soup with Mushrooms, Coconut Cauliflower and Chickpea Soup, and Matzoh Ball Soup.

Continue the chickpea love by serving platters of falafel, a Middle Eastern chickpea dish, like this Baked Falafel Salad with 2 Creamy Dressings. Other appetizers like this Socca Pizza, Buffalo Roasted Chickpeas, and Lentil Mushroom Walnut Balls are perfect.  Salads can be warm or cold. Try this Spicy Lentil Salad, Green Lentil Salad, Lemony Chickpea Salad, and this Smokey Chickpea and Watercress Salad with Mango and Avocado.

Serve lots of spectacular side dishes that feature beans and legumes like this Warm Potato Salad with Spinach and Chickpeas, Goji Millet Tabbouleh, Moroccan Sweet Potatoes and Chickpeas, and Turnips with Caramelized Onions and Toasted Lentils. For more amazing recipes using beans and legumes, check out 10 Ways to Cook Chickpeas with Global Flavors, 10 Ways to Cook Beans with Global Flavors, and Lentils Are More Than Just for Soup- Here’s How to Use Them Best. 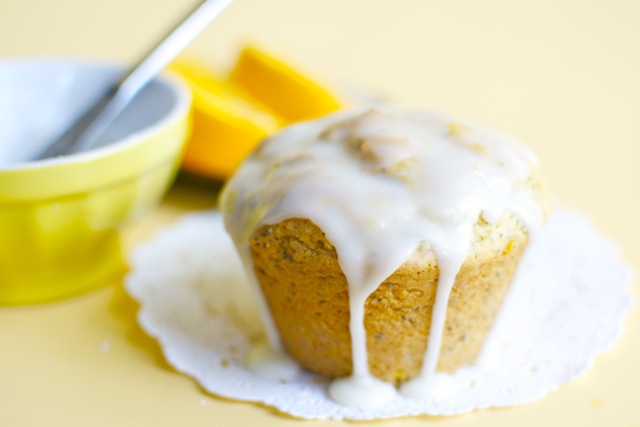 Poppy seeds, called mohn in Yiddish, are one of the most popular traditions when it comes to Purim food. It also has its roots in the seeds that Queen Esther was said to eat at the palace to avoid being detected as a Jew. You can certainly cover your fresh baked challah with poppy seeds and toss them over dishes of roasted vegetables. This Indian Alu Posto – Potatoes in a Poppy Seed Paste is a fairly classic Bengali recipe full of soft and comforting flavors. Dress your salad with this Poppy Seed Ramp Dressing. For dessert, make these beautiful Orange Poppy Seed Muffins, Lemon Poppy Seed Pancakes, Poppy Seed Bars or Lemon Poppy Seed Vegan Bundt Cake. 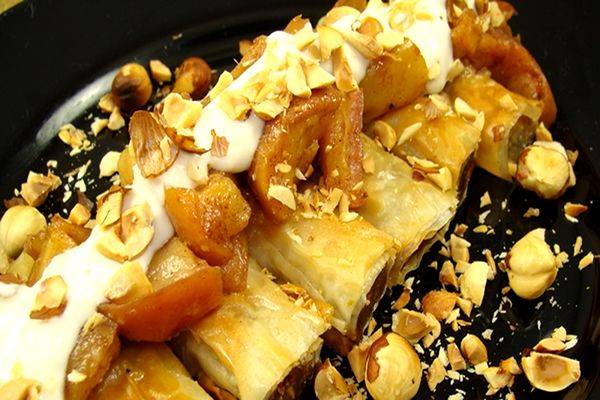 Perhaps the most well-known food eaten during Purim is Hamantaschen. They are shaped to be symbolic of the evil Haman’s hat and his triangular ears. Hamantaschen are light pastries that are filled with poppy seeds, fruit, preserves or other creative fillings such as chocolate or caramel. Make my Vegan, Gluten-Free Hamantaschen for Purim. Mine have blueberry and apricot preserves for filling, but you can use whatever fillings you love: prune, raspberry or fig (my favorite). If you want to make chocolate Hamantaschen, simply add some cocoa powder to the flour mix. Or mix peanut butter and jelly for a familiar type of filling kids will love.

You can also make savory Hamantaschen.  Just swap out the sugar in the dough recipe and add spices like garlic, thyme and rosemary instead. Make fillings like sauteed mushrooms and caramelized onions. Fill the dough with vegan mozzarella and a little marinara sauce and you have Pizza Hamantachen!

While Hamantaschen are of Ashkenazi origin, Sephardic Jews make pastries from phyllo dough. They fill them with walnuts, almonds, pine nuts and cinnamon and shape them more like Haman’s fingers than his ears. For a similar dessert, make these Golden Vegan Pumpkin Phyllo Rolls in Agave/Maple Syrup with Roasted Apples and Hazelnuts. 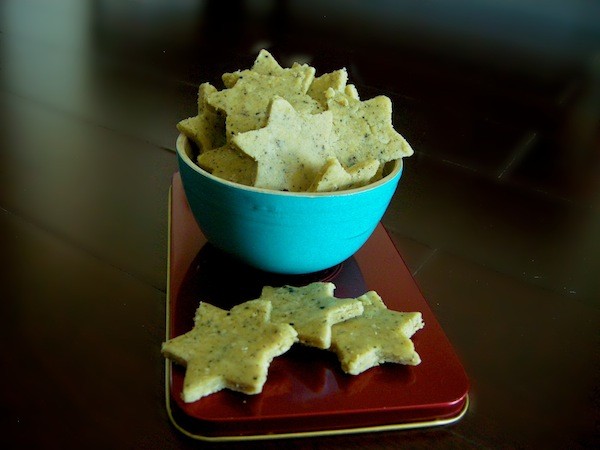 Deciding which of all these incredible recipes to celebrate your Purim feast with is a pleasurable task but there are a couple of other food-related traditions that are even more important. One tradition is called matanot l’evyonim which is giving food to the hungry. We make care packages of food and goodies and go to the doors of people who may not be able to get their own and offer them. This way they can also celebrate a Purim feast. While we celebrate and indulge in our feast, it is always good to remember those who are not as fortunate and share our abundance with them.

The second tradition is shalach manot which is sharing and exchanging gifts of food with our friends. These food gifts are usually presented in baskets and include Hamantaschen and other goodies like these Sweet Star Cookies as well as other foods. What a perfect way to introduce someone to the deliciousness that is vegan food!

On Purim we are commanded to hear, recognize and try to wipe away the evil in our world. It is the responsibility of each of us to bring healing to the world instead of pain and sorrow. One of the best ways we can do that is by choosing to eat and live in a way that prevents violence and heals us, the animals and the planet. Happy Purim!