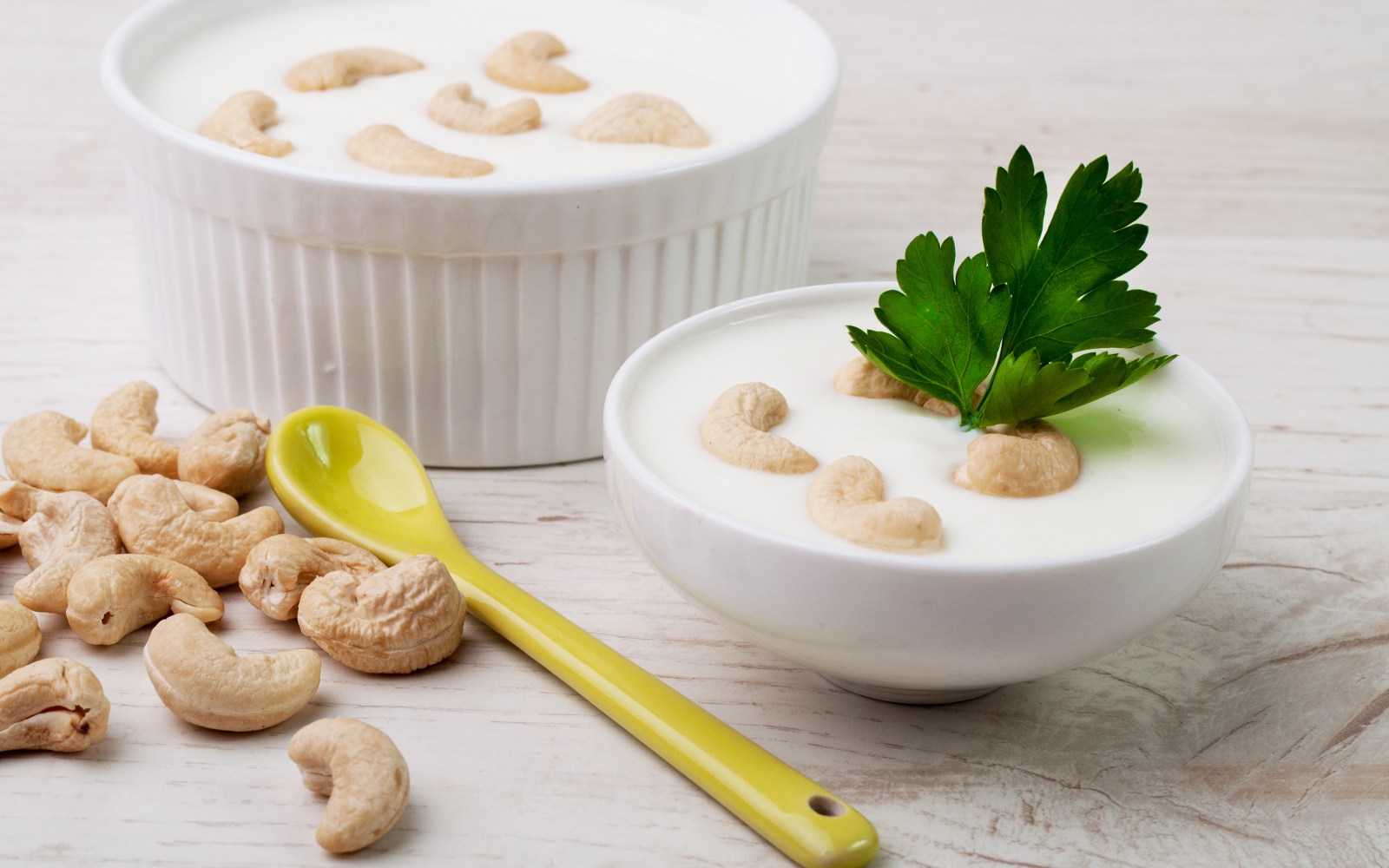 If you’ve just started making your own plant-based food, you will come across recipes calling for cashew cream sooner rather than later. But what exactly is it, and what makes it so ubiquitous in vegan cooking?

What Is Cashew Cream? 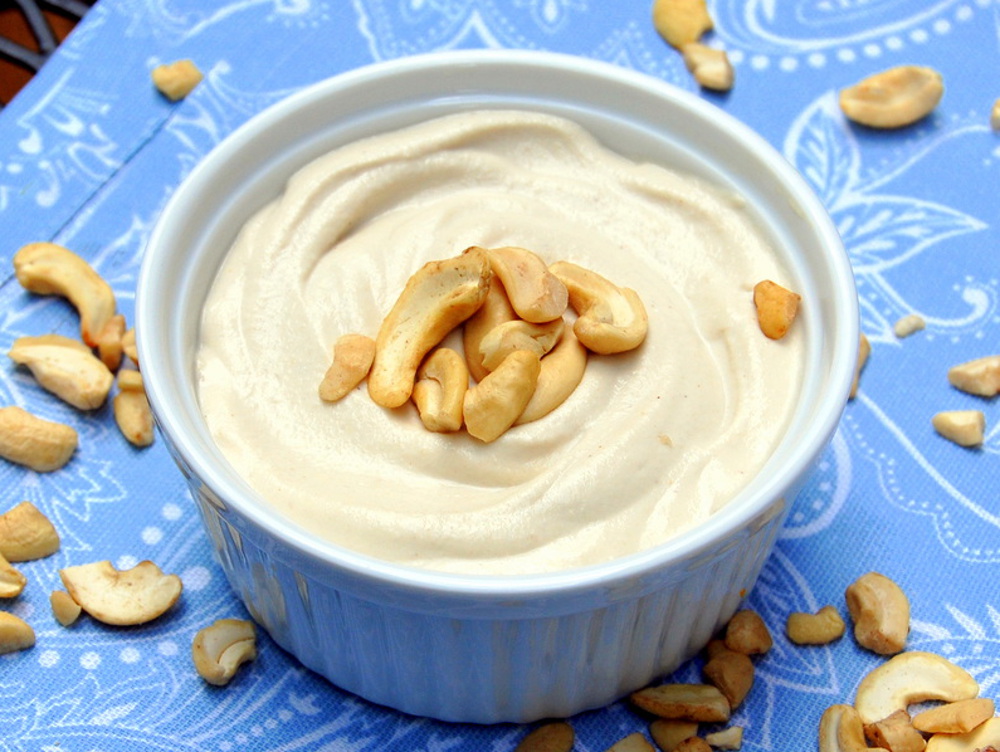 Cashew cream is a delicious and healthy substitute for dairy-based cream. At its most basic, cashew cream is made with one ingredient: cashews. Making your own cashew cream at home is simple, and just requires access to a blender or food processor. The recipe for Cashew Cream, pictured above, calls for one cup of raw cashews, soaked for four hours in cold water, drained, and blended. Ta-da! That’s all it takes.

Make sure you buy raw cashews for this purpose, not roasted or salted. Many people prefer to leave cashews soaking overnight to get them soft enough to blend, but should you need to expedite the process, you can also soak cashews in boiling water for an hour. To blend your drained cashews, you may prefer to add some water or non-dairy milk in for a smoother or thinner texture.

Now that you know how to make basic cashew cream, you can, of course, get more sophisticated. For example, this Cashew Sour Cream incorporates nutritional yeast and apple cider vinegar. Similarly, make Cashew Tzatziki Sauce as an alternative to the traditional yogurt-based Greek sauce. Or stir in some sugar or other sweetener of choice for a sweet cream, which is so good you’ll want to eat it right out of the blender.

And while you’re at it, you may as well try making some homemade Cashew Milk!

What Are the Benefits of Cashew Cream? 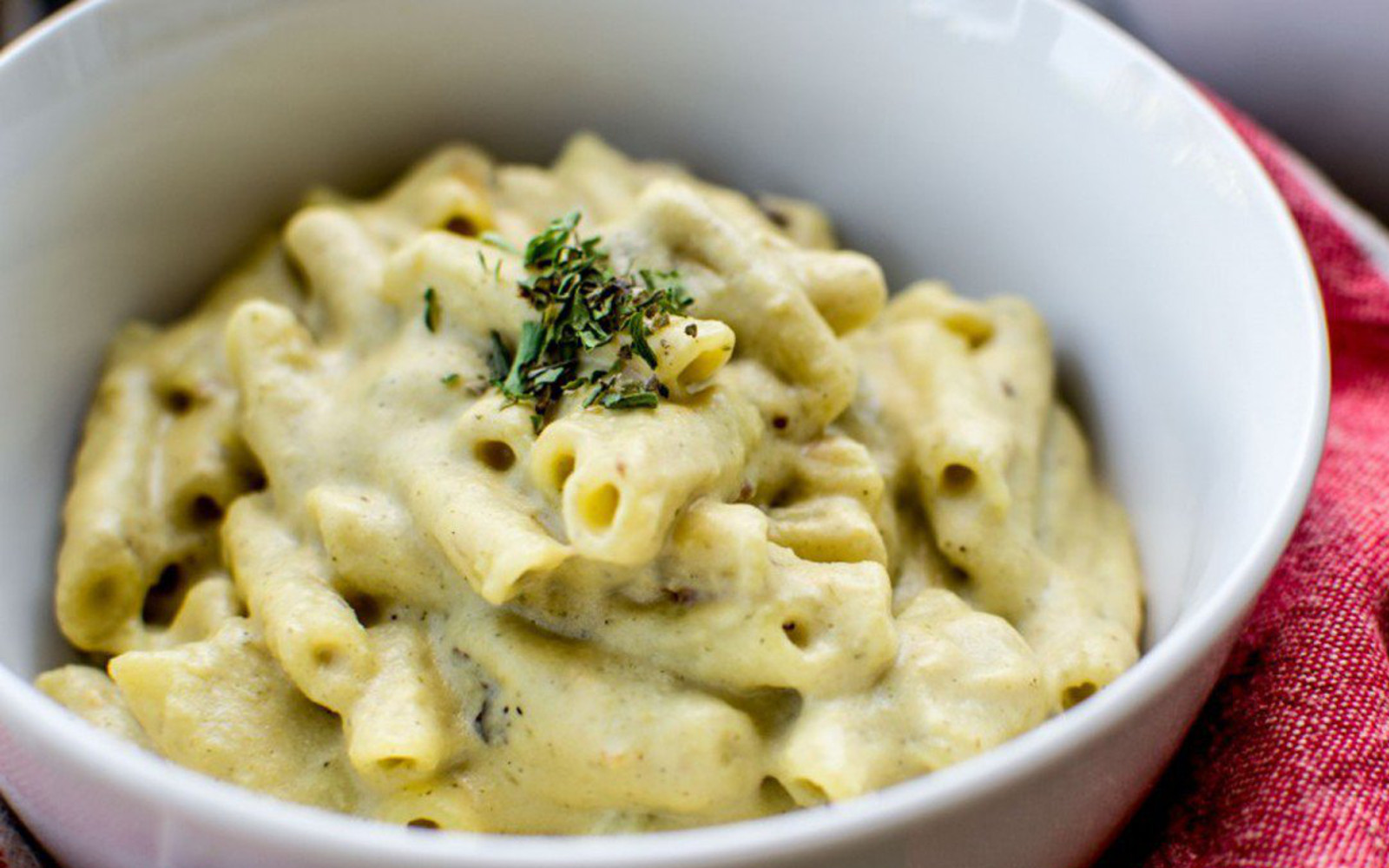 Cashews are incredibly healthy. Less fatty than many other nuts, they contain vitamins and minerals and lower your risk of diabetes. One ounce contains 5.1g of protein and 0.9g of fiber, and cashews are a good source of magnesium, phosphorus, copper, and manganese. For example, though the Cheesy Cashew Cream Pasta pictured above may look like a sinful indulgence, it is low in calories and sugar and contains 12g of protein.

When weighing cashew cream against traditional dairy cream, the former wins out every time.

What Can I Use It In? 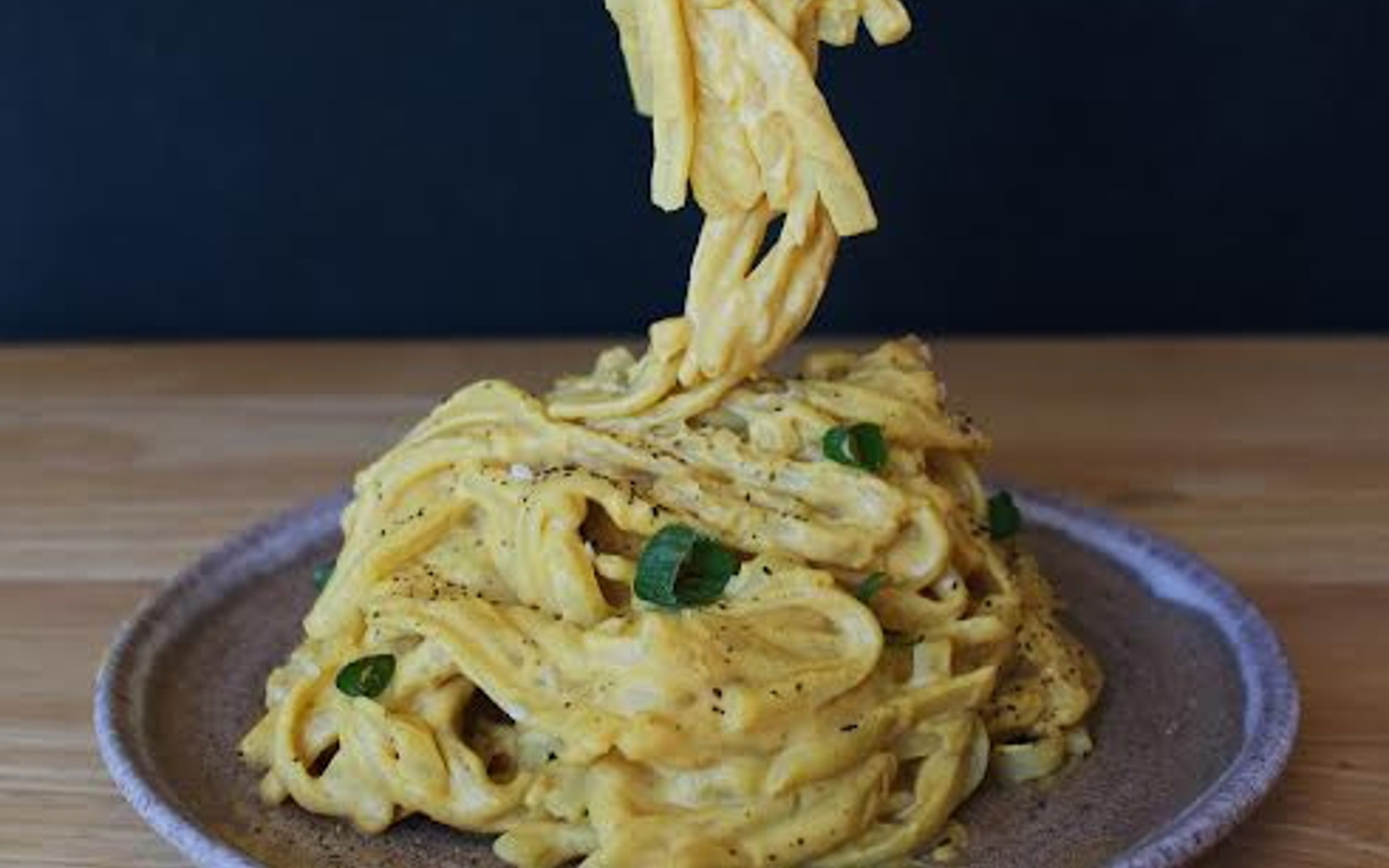 The short answer here is: everything. Because of their creamy nature, cashews make a tasty addition to or base for a huge number of dishes, savory and sweet alike. For your main courses, the cashew cream base works well as part of pasta sauce, soup, dips, garnishes, or anything else you can think of. For this reason, cashews make a perfect food hack. So, we’ve provided some recipes from the Food Monster App below to help you get cooking.

In pasta, try out 6-Ingredient Pumpkin Alfredo, pictured above, or Lasagna with Butternut Noodles and “Part-Skim” Cashew-Cauliflower Ricotta. Making soup? Cashews can help, like in this Creamy Pumpkin Soup with Pumpkin Sour Cream. Try cashew cream as a topping in this Moussaka With Cashew Cream, or for these hearty Sweet Potato Stuffed Shells with Cashew Alfredo.

For the sweet side, cashew cream is perfect for cakes, like these Mini Cashew Cream Cheesecake. You can use it to make ice cream, like this Maple and Lavender Cashew Ice Cream, or stir it into your coffee or hot chocolate. Make cashew cream the centerpiece of your dessert like in these Cashew Cream Cups. Cashew cream can also make an excellent dessert topping, like in this Raw Chocolate Mousse Tart with Lemon Cashew Cream.

Now that you have this creamy substance on hand, there’s another obvious option: make cheese! Try making this Cashew Cheese as a tasty spread, or a ‘Vegveeta’ Cheese Dip.

What If I Can’t Eat Cashews? 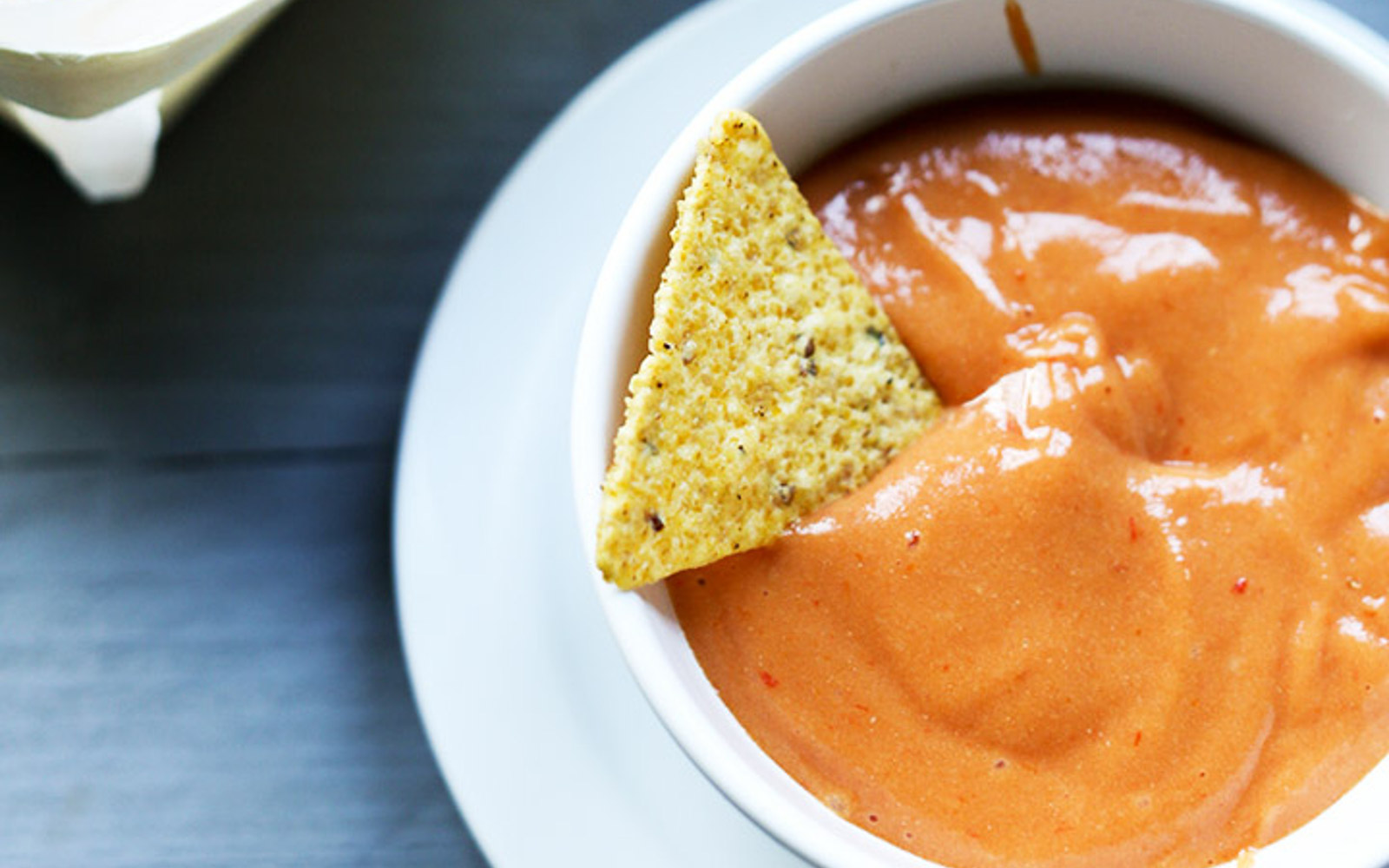 If you have nut allergies (or if you simply don’t have any cashews lying around), there are still plenty of options for those creamy textures and tastes. Just be aware that if you go to a vegan restaurant, it is likely that some of their dishes will be made with cashews, so be sure to ask first.

In terms of cooking at home, you can get a similarly creamy texture using sweet potato, butternut squash, pumpkin, or potato. For instance, check out this Nut-Free Nacho Dip, above, made with potatoes and carrots. Silken tofu also often stands in for a creamy base, like in this Silken Tofu Mousse. You can also try out oats as a base, and make 4-Ingredient Probiotic Oat Yogurt. Of course, another vegan favorite when it comes to dairy substitutes is coconut milk and coconut cream. Try using coconut as a creamy base for this ‘Just Like Boxed’ Mac and Cheese, for example.

If you can have cashews, however, cashew cream is well worth a blender purchase. For more inspiration, check out 30 Unbelievable Recipes Made with Cashews.

If you need more ideas for cooking with cashews, check out the Food Monster App. It’s available for both Android and iPhone, and can also be found on Instagram and Facebook. The app has more than 10,000 plant-based, allergy-friendly recipes, and subscribers gain access to ten new recipes per day. Check it out!