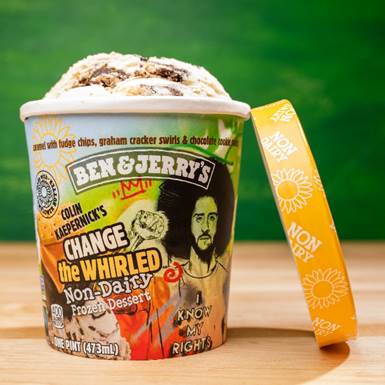 Two forces have united for change. Colin Kaepernick and Ben & Jerry’s have released a new vegan ice cream flavor to help support black and brown communities. The flavor is called “Change the Whirled.”

Kaepernick’s portion of the proceeds from sales of flavor will support the work of Know Your Rights Camp, Kaepernick’s non-profit. Know Your Rights Camp’s mission is “to advance the liberation and well-being of Black and Brown communities through education, self-empowerment, mass-mobilization and the creation of new systems that elevate the next generation of change leaders.”

Kaepernick is well-known for taking a knee during the national anthem in protest of police brutality. This caused controversy in the industry and across the nation. However, his act of protest also drew the support of Barack Obama and many sports players followed Kaepernick’s lead. Around this time, Kaepernick also started eating plant-based with his girlfriend. They made the switch for ethical and health reasons.

Kaepernick supports the non-dairy flavor filled with fudge chips, graham crackers, and chocolate cookies. The flavor is available at Ben & Jerry’s Scoop Shops and in grocery stores beginning in 2021.

“I’m honored to partner with Ben & Jerry’s on Change the Whirled,” said Kaepernick. “Their commitment to challenging the anti-Black roots of policing in the United States demonstrates a material concern for the wellbeing of Black and Brown communities. My hope is that this partnership will amplify calls to defund and abolish the police and to invest in futures that can make us safer, healthier, and truly free.”

“Colin Kaepernick and his Know Your Rights Camp is the perfect partner for Ben & Jerry’s to continue to advance our work on issues of racial justice,” said Matthew McCarthy, CEO of Ben & Jerry’s. “Ben & Jerry’s is proud to diversify our flavor portfolio by honoring Kaepernick with a full-time flavor. We deeply respect how Colin uses his voice to protest racism, white supremacy and police violence through the belief that ‘love is at the root of our resistance. We have tremendous hope in what we can accomplish together.”

Sign this petition to demand racial and social justice

Here are some delicious vegan ice cream recipes to try too: