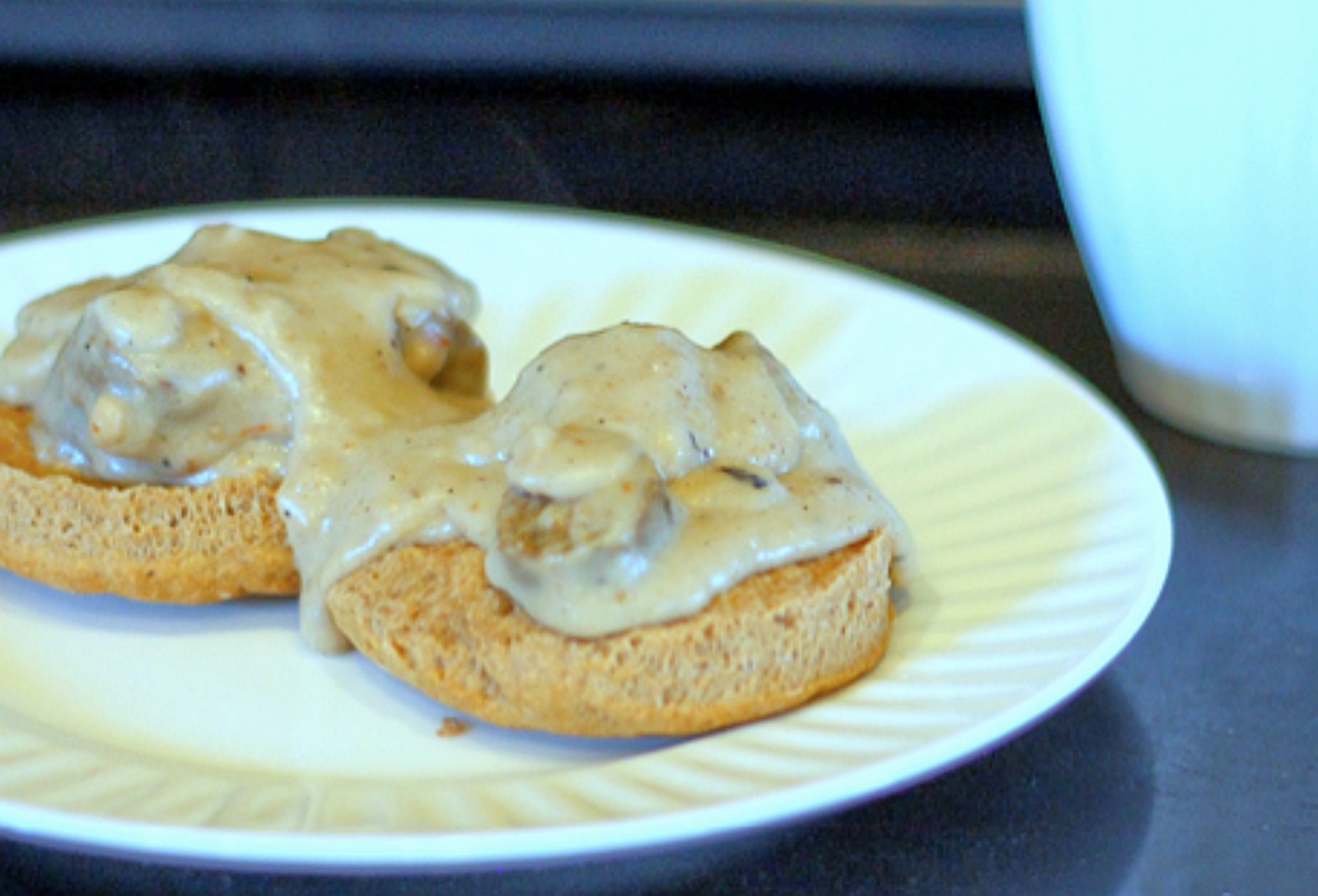 For one breakfast only, let’s throw the healthiest options out the window, get back to my southern roots, and recreate a classic Deep South breakfast as a vegan masterpiece. We won’t worry about a balanced meal or vitamin content. (Hey! Fair is fair: My grandma wasn’t thinking about that!) We won’t worry about gluten intolerance, raw food percentages or the trouble with soy. Forget about omega-3 and sources of good fat. There is but one goal: home-cooked, southern-style breakfast for a homesick vegan. Can it be done?

Well, we’ll start with the basics and see how we can, just this once, do them all grand style. Number one: You can’t have a southern breakfast without biscuits. And, let’s be frank, an option of bacon or sausage is always on the menu. Grits are probably the most regionally telling of all the dishes. At Grandma’s house, breakfast ain’t breakfast without eggs. And, what sort of person would exclude hashbrowns!? Gotta have ‘em all. This is gonna be fun.

Fear not, I’ll set you up with all the recipes, so you can do it yourself. 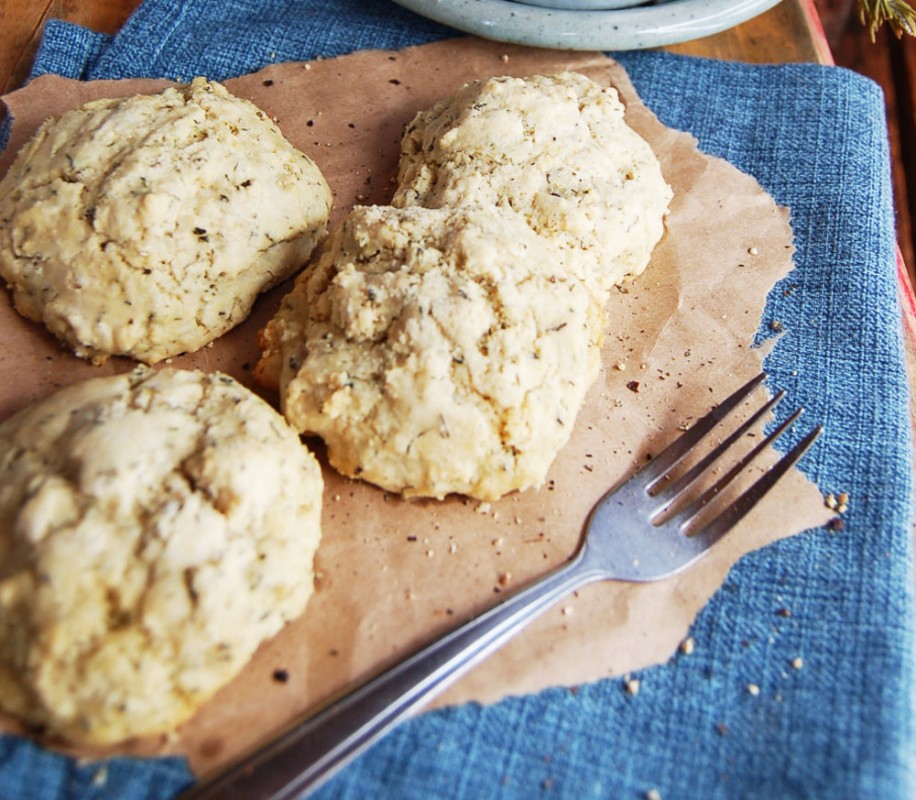 Now, to be completely honest, biscuits and gravy used to constitute an entire breakfast for me: Three fluffy, white, open-faced biscuits smothered in creamy white gravy, just a smidge of spice running through. Wow! The thought of it now makes my stomach heavy, but no way we are taking any shortcuts today.

Firstly, why settle for second best on the biscuits? Shouldn’t we just go “buttermilk” (the vinegar is key here) to keep the stakes appropriately high? Now, for the gravy, just keep it simple like grandma used to do: Melt 2 tablespoons of margarine in a skillet then add 2 tablespoons of flour to make a little roux. Once the flour is cooked, thin it out slowly with about a cup of (unsweetened soy or almond) milk. Lastly, some cracked black pepper and a shake or two of Tabasco. 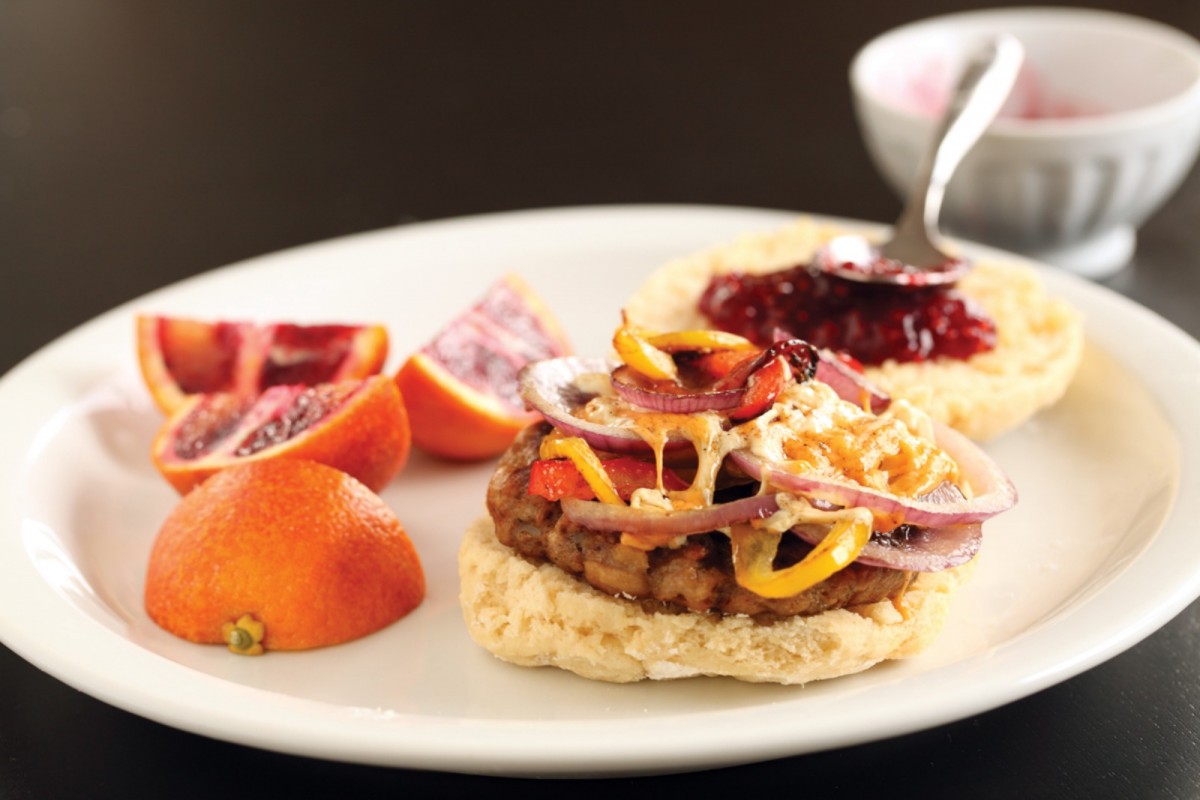 Being a Louisiana boy, land of homemade Andouille, I always preferred sausage to bacon. It was never even a choice for me, so for those of you looking for bacon, smoky coconut bacon is fantastic and would work particularly well sprinkled on some biscuits and gravy. But, this fantasy breakfast is going the sausage route, and we aren’t talking frozen links. It’s patty-style Andouille all the way.

If you don’t know about Andouille, suffice it to say, that it’s a well-spiced sausage of Cajun origin, often served in gumbos and jambalaya. But, when the occasion calls for it, as is often the case in Louisiana, Andouille is not shy about crashing a breakfast plate. This is one party to which it is cordially invited. 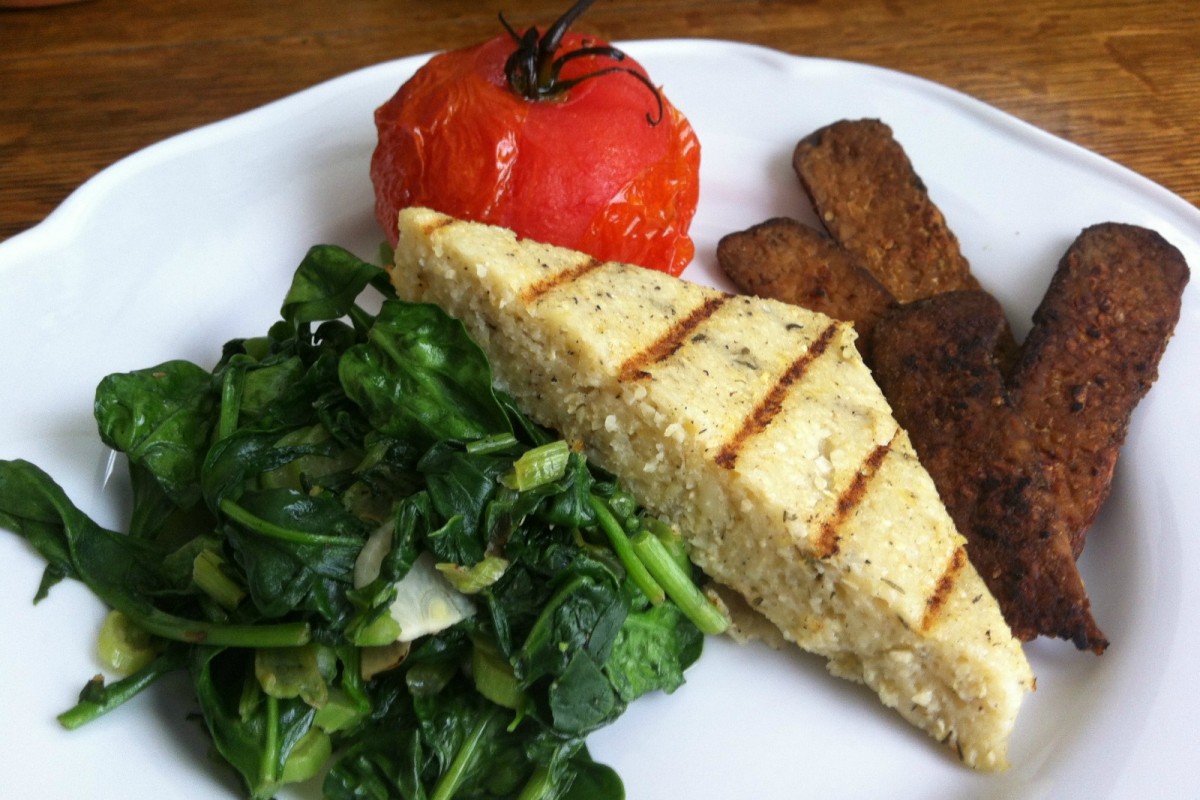 Throughout my childhood, I would eat microwave cheese grits nearly every morning before school. I never knew there were people just a few states over who had little to no idea about grits. Poor, poor souls. There is not a chance a breakfast is Deep South if ain’t got grits! And, while cheesy isn’t necessary, this morning is not at all about what’s necessary. This is vegan gluttony.

In my humble opinion, the best grown-up grits are those simmered with an even mixture of milk and water (three cups liquid to one cup of dried grits). While everything is getting nice-nice, you add some garlic powder, cracked black pepper, and oregano. Keep stirring so that it doesn’t stick, and when the stirring gets a bit slower, add a couple of pats of vegan butter and two spoons of nutritional yeast. Bam! 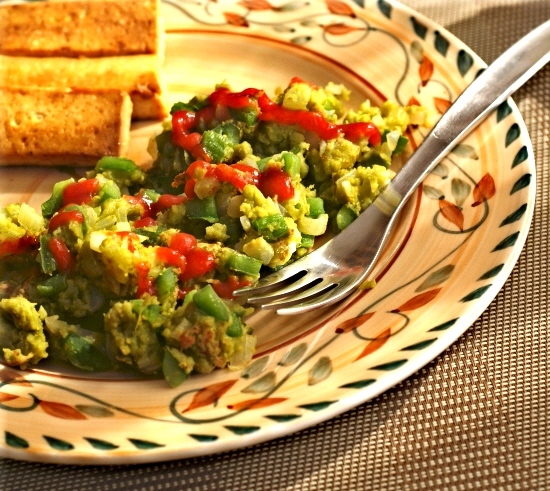 Even for those of us who grew up on a farm with daily fresh, free-run chicken eggs for breakfast, I still think vegan cooking does a dandy job with scrambles, and coming from a big family, scrambled just seem to make more sense than trying to fry ‘em for five. Well, luckily for me, tofu does the trick as well as any egg I ever tasted back then.

There are loads of great scramble options out there for other mornings, but for today’s purposes we are simply after the classic wobbly yellow version that nestles comfortably amongst all the other treats on the plate. That means firm tofu crumbled into a non-stick pan with a little turmeric added for the tint of it. 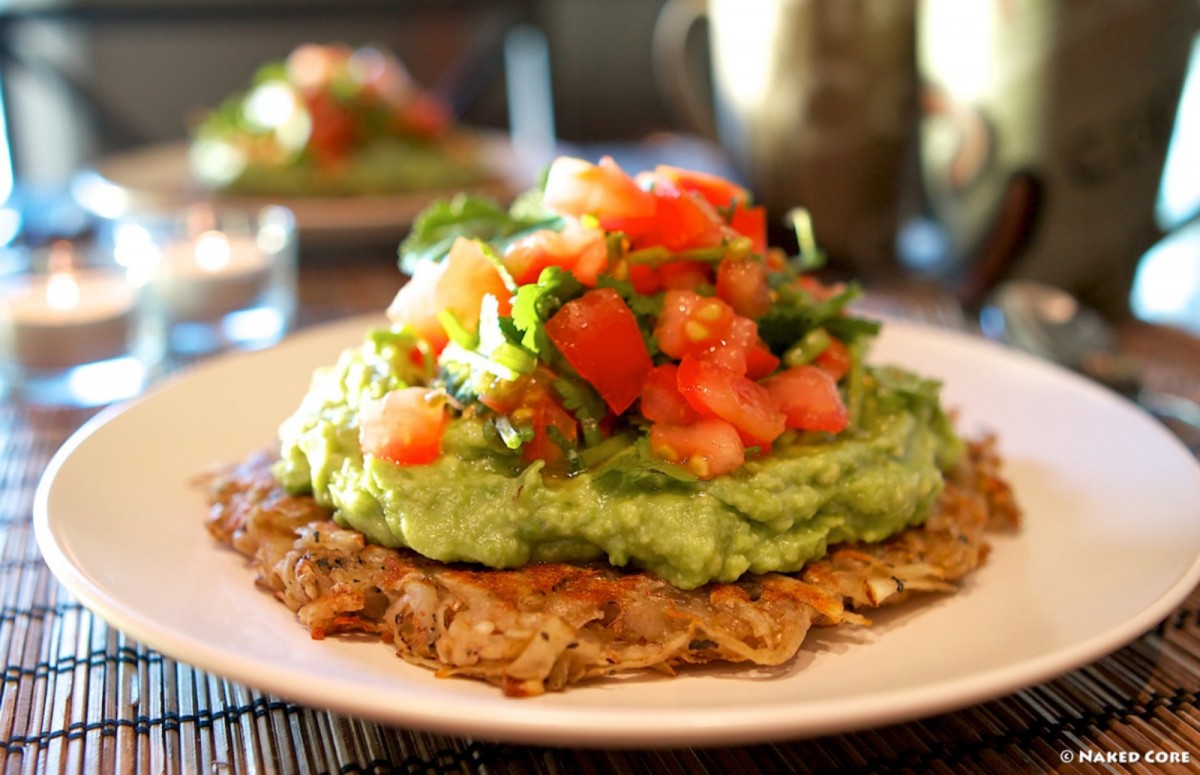 When compiling this waltz down memory lane, it pained me to leave pancakes off the list. They were a favorite but simply didn’t combine with the rest of so well, a bit beyond surplus. So, as a compromise, we’ll be combining the appropriately flavored breakfast potatoes with the pancake format: potato hashcakes.

There are lots of theories on the potatoes in the morning, but, without a doubt, the classic sling ‘em out style hash brown potatoes are the choice. Grated washed, raw potatoes and mix the shreds with salt and pepper. Then, form a ball and flatten it out into a pan with hot oil. Give a few minutes to brown before flipping for a couple minutes more. Done and crispy.

Serve it with a bottle of Tabasco on the side. As for fitting it all on your plate, or in your stomach for that matter, that might take a little more practice. Maybe this isn’t a one time only thing.