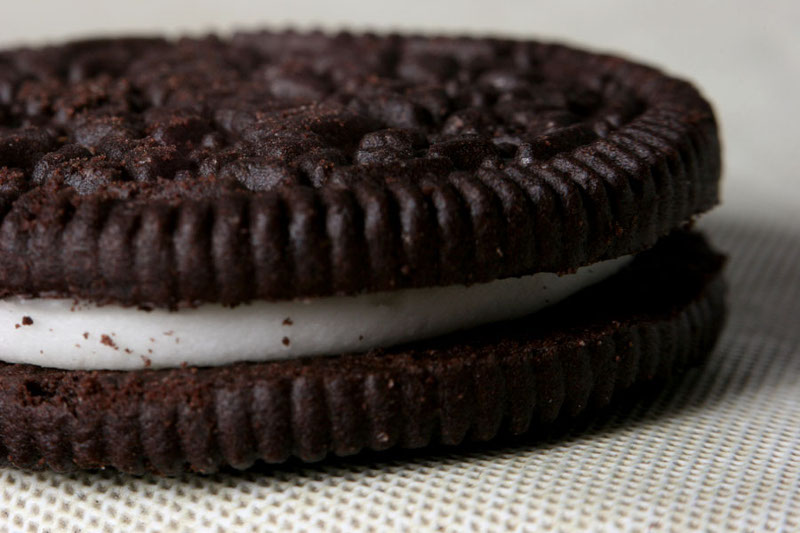 Vegan or “plant-based” doesn’t always mean healthy. All these snacks are vegan-friendly but eating them is pure indulgence – there’s little or no nutritional value here.

Always check the ingredients before buying. Manufacturers have a habit of proclaiming a “new improved recipe” which could contain animal derivatives. Don’t you just hate it when that happens?

Newsflash: the cream in Oreos isn’t made of cream! The Oreos website states that these cookies are not suitable for vegans because of the ‘cross contact of Milk’ (sic) but it seems they are confusing veganism with a dairy allergy. Milk products are not among the ingredients.*

Most plain tortilla chips are vegan, including Doritos and Fritos. Ingredients are usually corn, oil, and salt, and nothing else. However, you might want to check where that corn comes from. Did you know that 80 percent of corn in the U.S. is genetically modified? Read more about the dangers of GMOs here.

Ever read the ingredients on a pack of gum? There’s a lot of long words for something so small. Even though you don’t swallow gum, it spends a long enough time in your mouth to unload its synthetic chemicals into your bloodstream. Those include acesulfame K, aspartame, and preservatives, to make the synthetic gum seem palatable.

Modified wheat starch and high-fructose corn syrup are key ingredients in these breakfast snacks. High-fructose corn syrup has been credited as a major factor in the world obesity epidemic, because your body converts it directly into fat. To add insult to injury, Pop Tarts will probably burn your mouth too. Ouch!

Most cinemas produce their popcorn with lots of soya oil, and sweet varieties are coated with refined white sugar. A large tub of sweet popcorn can easily contain 1250 calories and 60g fat! Again, be aware of where the corn has been produced to make sure it’s not a GMO. A better alternative is to buy organic kernels and air-pop them at home.

The glazed apple and cherry pies produced by this junk food giant are vegan, even if their donuts aren’t. But if your idea of vegan doesn’t include high-fructose corn syrup, artificial coloring, modified corn starch and sodium benzoate, among other chemical nasties, then Krispy Kreme is not for you. Bake a cake instead!

UK pastry manufacturer Jus-Rol makes all its products except shortcrust pastry with no dairy ingredients. Their chilled, ready-to-bake goods now include croissants and pains au chocolat. The imagery on the tin looks golden and wholesome, but don’t forget that these are still lumps of pastry, AKA fat mixed with some wheat flour, so go easy on them!

Instant mash can be a quick fix for rushed mealtimes, but is no substitute for the real thing. It’s usually vegan because in theory it’s just dried potato flakes. However, instant mash loses most of its vitamin content through processing, and often has salt and preservatives added to lengthen shelf life.  Look out for brands that also use hydrogenated fats to give their product a ‘creamy’ texture and silicon dioxide to prevent clumps forming. Real mashed potatoes, on the other hand, provide significant levels of vitamins C and B6, as well as lots of potassium and fiber. And they taste better, too!

It’s vegan, but Red Bull’s ingredients list reads like the inventory for a chemistry lab and not something you might recognize as food. Did you know that taurine was originally made from bull’s bile? (It’s now synthetically produced). Or that caffeine is a cousin of cocaine? Apart from its much-hyped and hyperactivity-inducing ingredients, Red Bull is basically sugar water. But I’ve heard it’s a great bathroom cleaner. That might be the best use for it.