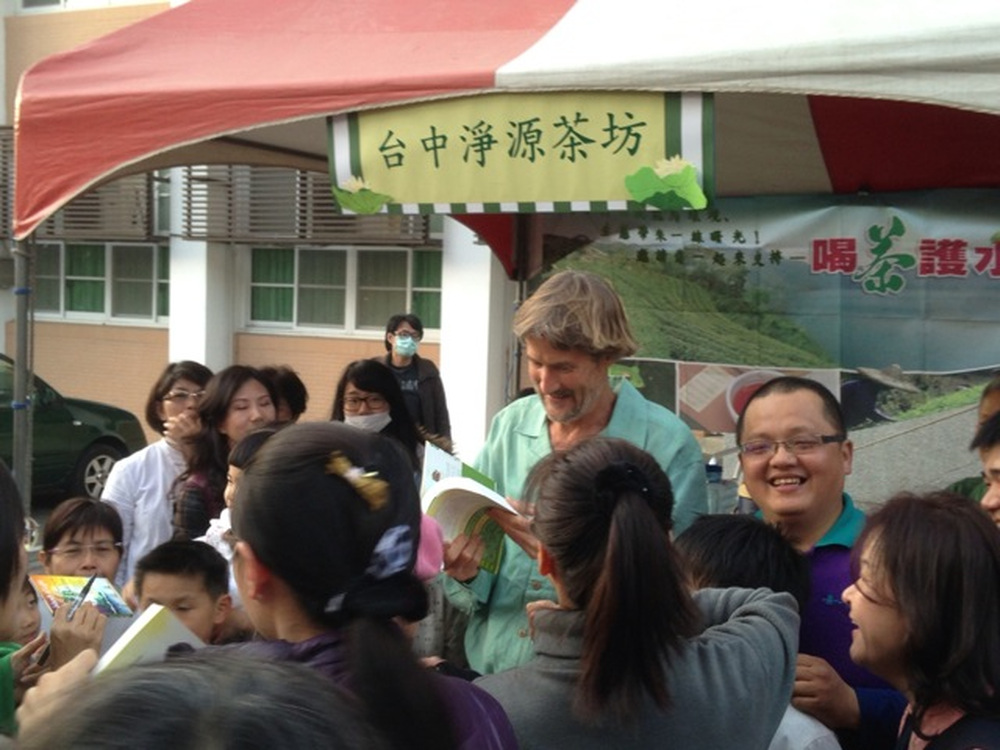 “Taiwan is known as the vegetarian paradise.” Soon after arriving in Taiwan recently, I was told this by quite a few people. There are over 1,500 registered vegetarian restaurants on this little island smaller than West Virginia, with a population of 23 million people. Taiwan, also known as the Republic of China, was originally named Formosa by Portuguese explorers, which understandably means “Beautiful Island.”

During my five-day lecture tour I discovered a less-obvious heart-touching beauty of this island: the Taiwanese people, who strike me as some of the most caring, motivated, and intelligent people I’ve encountered anywhere. What I found most inspiring is their enthusiasm for both veganism and for organic and ecological living. My lecture tour was organized primarily by a local grass-roots vegan education group called Meat-Free Monday Taiwan, and secondarily by the publishing company that translated my book, The World Peace Diet, into classical Chinese.

Remarkably, 93 percent of all secondary schools in Taiwan have adopted a meat-free policy in school lunches one day per week, and increasing numbers are now boosting it to two days per week (and hopefully, beyond this also). A predominantly Buddhist country, Taiwan has many Buddhist organizations that, unlike those in the West, actively promote vegetarian and vegan living. I was fortunate to be able to meet with and collaborate with some of these groups.

For example, the largest Buddhist organization in Taiwan, Fo Guan Shan (Buddha’s Light Mountain), founded by Dharma Master Hsing Yun, has many temples and meditation centers throughout Taiwan and around the world. All the monks and nuns, as well as the retreats for lay people, are vegan (“pure vegetarian” in Chinese) and their restaurants are all vegetarian. Fo Guang Shan sponsored a seminar at their center in Taipei where some of the monastics and I discussed the many benefits of veganism for an audience of both monastics and the public.

Another large Taiwan-based Buddhist group that promotes vegetarianism and veganism is the Buddhist Tzu Chi movement founded by Dharma Master Heng Yin. This organization produces several national TV programs, and we recorded two episodes in their studio focusing on the benefits of veganism, and on the healing power of music. Tzu Chi also has a half-dozen full-scale hospitals in Taiwan, and I gave a lecture at one in Taipei to an audience of about 300 people comprised of nurses, nutritionists, doctors, and the public. All of Tzu Chi’s hospitals are vegetarian/vegan, and several doctors spoke in their introductory remarks to the audience before my lecture of the significant health benefits they see in advising their patients to eat plant-based diets. Taiwan seems to be on the cutting edge of wellness, and is world renowned for its affordable and effective health-care system, considered by many to be the best in the world. It’s not surprising, with this focus on the benefits of plant-based meals. Both Fo Guang Shan and Tzu Chi have memberships that include millions of people, and the vegan teachings that the monks and nuns exemplify and propagate not only raise consciousness in Taiwan, but also in our entire world because they are world-wide in their scope and outreach.

A third Buddhist organization, the Leezen group that runs 97 Taiwanese vegetarian and organic health-food stores, and its affiliated Bliss and Wisdom Cultural Foundation, sponsored my two main lectures in Taiwan. The first, at the university in Taichung, drew 1,800 attendees, and the second at Taipei Tech in Taipei, attracted 2,200 people. Again, the response to the vegan message of compassion and justice for animals was received with enormous enthusiasm by both the general public, who gave standing ovations at the end of the presentations, and also by the university officials, who are keen to promote veganism in Taiwan. Both the president of Taichung University and the president of Nanhun University are eminent academics and policy experts in Taiwan, and besides practicing veganism themselves, took the opportunity to promote veganism in their opening remarks to the audiences before my lectures.

After decades of encountering chronic resistance to veganism from university administrators and religious leaders here in North America—even among progressives like those in the Buddhist, Unitarian, Unity, yoga, and environmental and peace movements—it was enormously refreshing to see veganism warmly embraced and enthusiastically expounded by leaders in the Taiwanese religious and educational sectors. We have a lot to learn from our brothers and sisters in Taiwan it seems!

Finally, what about Taiwanese politicians and veganism? Again, a refreshing example of sanity and caring. I participated in a Taipei press conference with two of Taiwan’s most eminent government officials, Madame Annette Lu, who served as Vice-President of Taiwan from 2000-2008, and Lin Hungshih, currently the majority Whip in Taiwan’s House of Representatives. We all agreed about the crucial importance of promoting veganism in society today, and also enacting public policy and education initiatives to help people understand this and encourage adoption of plant-based eating. We discussed ideas such as implementing a tax on meat, for example, and the members of the press asked intelligent and supportive questions.

All in all, I am immensely encouraged by the progress being made in Taiwan by hard-working and dedicated activists who are helping Taiwan lead the way as a brilliant way-shower to the rest of struggling humanity. Besides the work being done by vegan activists, Buddhist monastics, politicians, and educators, there is also cooperation from the Taiwanese press. For example, besides being able to reach thousands of people directly, my presentations were positively covered by all four major newspapers in dozens of articles, so we were reaching potentially millions of people with the vegan message. There are many lessons in all this, and one of the main ones is that we humans can awaken on a large scale from the nightmare of animal exploitation, and cooperate and create institutions that promote compassion for all living beings. Taiwan is a significant example of ways that we can accomplish this, and is an helpful inspiration for us all.

For now, I’ve just arrived here in Australia, and have another whirlwind of lectures here and in New Zealand over the next month. Attending a rally of over six thousand people on the beach in Perth yesterday to protect sharks, I feel inspired yet again by the devotion we humans are capable of, to bring compassion, peace, and freedom to nonhuman animals and each other. The momentum for a vegan world is building, and nothing is more crucial than this.