You Better Know This by Now, but Here’s More Reasons Why Meat = Bad News! 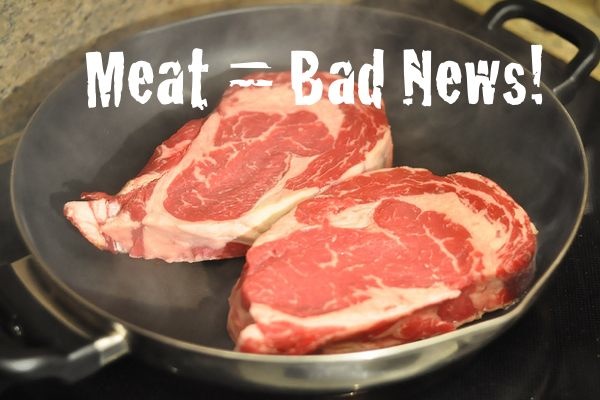 We’ve got some bad news for all the meat and dairy lovers out there. Two recently published studies have found some disturbing new impacts related to the consumption of animal products:

Meat and dairy consumption in childhood may trigger early puberty in boys, according to new research from Fulda University of Applied Sciences in Germany. For the study, researchers tracked food intake of 112 children at ages 1, 2, 3-4, and 5-6. Even after controlling for other factors such as total energy intake and breast feeding, they found that children who consumed the most animal protein entered puberty nearly a year earlier than those who consumed less.

This isn’t the first research linking animal protein consumption to disturbing hormonal changes in children. A 2010 study found that girls who consumed more animal products began menstruating significantly earlier than those who consumed less. Specifically, 49 percent of girls who ate more than 12 portions of meat a week at age 7 had started their period by the age of 12 and a half, compared with only 35 percent of those eating four portions or less.

While early puberty can certainly impact children psychologically, it isn’t just a social issue. Early puberty has been linked to a greater risk of developing prostate and breast cancers, heart disease, and psychological disorders.

Another recent study found a connection between red meat consumption and an increased risk of developing bladder cancer.

In case you hadn’t heard, reducing meat and dairy intake is also good for the planet!