Whale Found Dead Had 40 Kilos of Plastic Bags In Stomach! 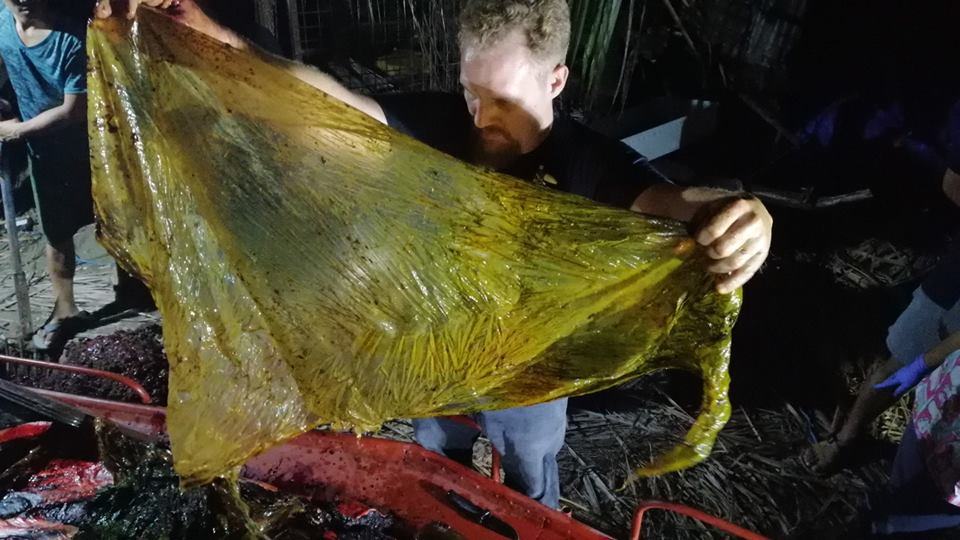 A Cuvier beaked whale washed ashore in the Philippines with over 40 kilos of plastic found in its stomach. This horrifying amount proves that the harm of plastics isn’t going away, and marine animals are suffering and dying. Whales in particular are subject to easier consumption of plastic because of their large mouths.

The young whale was found dead ashore the island of Mindanao where marine biologists and volunteers from the D’Bone Collector Museum took the deceased whale for further evaluation. What they uncovered was truly gruesome.

An autopsy revealed that over 40 kilos of plastic bags were ingested by the whale. Those bags consisted of 16 rice sacks, four banana plantation style bags, and various shopping bags as well. This plastic build up caused the whale to experience “gastric shock” which was ultimately ruled the cause of death.

According to The Guardian, the marine biologists on site said that they have never seen this much plastic ingested by an animal. They also believe that “action must be taken by the government against those who continue to treat the waterways and ocean as dumpsters.” The owner of the D’Bone Collector Museum, Darrell Blatchley, stated that he and his team have been able to determine that 57 of the dolphins and whales they have studied died due to plastic ingestion.

Plastic is detrimental to the environment and safety of marine animals. The disturbing reality is that between four and 12 million metric tons of plastic enter the ocean each year, according to the Oceanic Society. Scientists estimate that almost half of the sea turtle and sea bird populations consumed plastic during their lifetime. About 80 percent of the litter in the ocean actually comes from land, with the majority of that pollution being plastic. Most plastic is not recycled and eventually makes its way into the ocean.

We can’t force plastic production to completely halt overnight, but there are still ways we can all individually make a difference in the amount of plastic we use. You can also add your voice by demanding the reduction of plastic used. This petition asks Juneau, Alaska to ban single-use plastic and polystyrene foam!