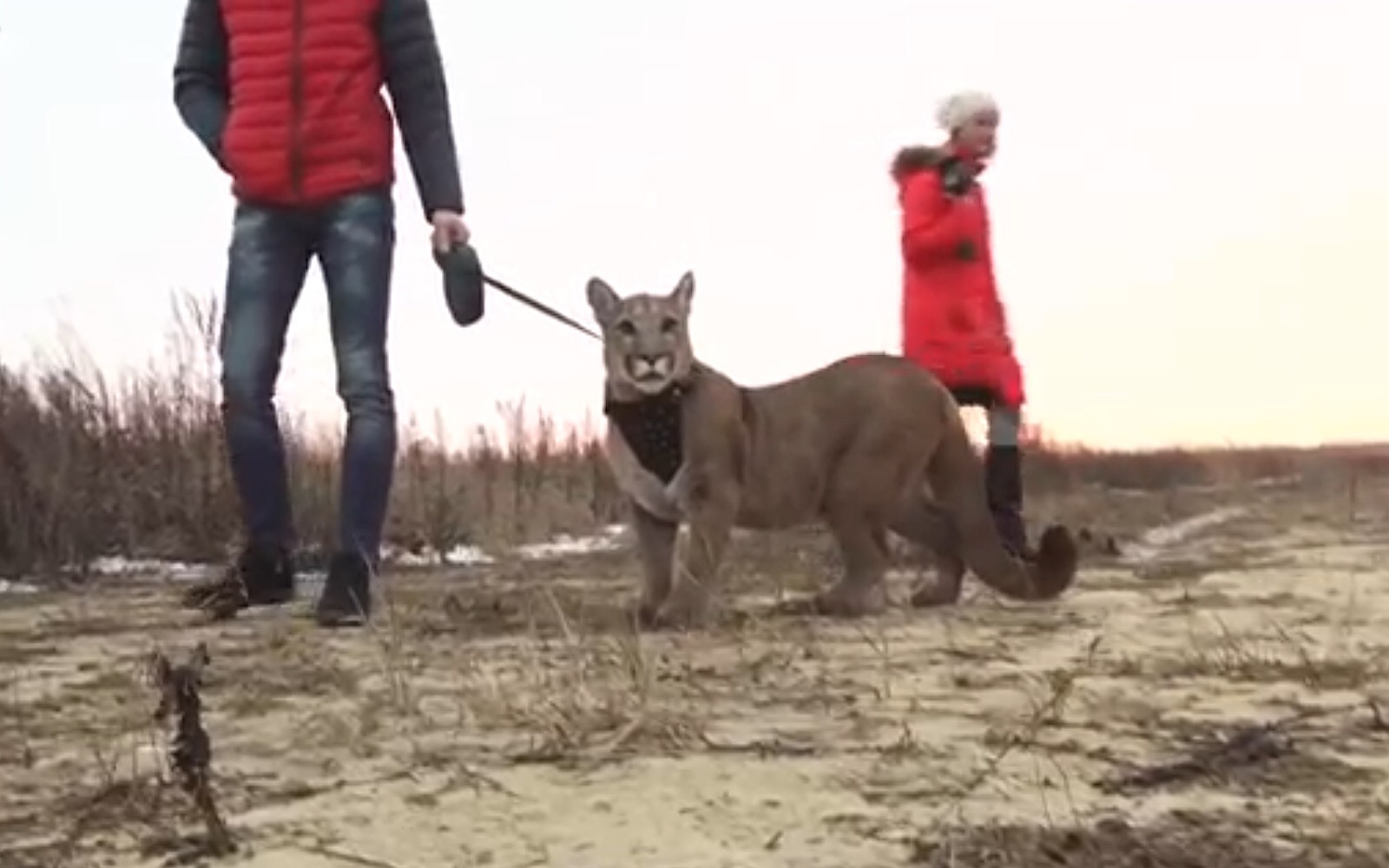 When most people consider adopting a new pet, they typically choose a dog or cat, but there is one couple in Russia who decided to bring a young male puma into their home and keep him like a pet.

The puma named Messi is gaining some Internet fame around social media, and it is easy to see why. Messi is 30 percent smaller than the typical male puma and lives in the couple’s home alongside their Sphynx cat. He has an enrichment play area, takes baths in the tub, is fed hearty meals of raw meat, is leash-trained, and goes on nature adventures to the river and beach.

The couple has even enrolled Messi in obedience training classes where the big cat appears undisturbed alongside the dogs at the training school.

Although Messi appears remarkably tame, well-trained (although the methods that were used to do so are unknown and could have been harmful to the animal), and is given much love and attention, keeping a wild animal poses serious dangerous threats. Wild animals cannot be domesticated within their lifetime, and despite intensive training and adapting to a domestic life, their natural wild tendencies can still emerge, often without warning, and typically beginning at sexual maturity. Messi is two-years-old, and male pumas reach sexual maturity around three years old. We hope Messi’s guardians consider sending him to a reputable sanctuary where he can develop and live like an adult puma without posing risk to people or other animals.

Messi may seem like a unique story, but unfortunately, the issue of keeping big cats as “pets” has become somewhat of an epidemic around the world. It is such a serious issue that there are more tigers in backyards today than there are in the wild. After big cats become too much for people to handle, they are often killed or abandoned and left to starve to death. The idea of keeping wild animals as pets also fuels the wildlife trade which is corrupt with both animal and human rights violations. Realizing the severity of the issue, the United Arab Emirates has banned the ownership of big cats, and we hope the rest of the world follows suit.

Although it is apparent Messi’s guardians truly love him and are trying their best to provide him with an enriching and comfortable life, the young puma belongs on a sanctuary where he can roam freely in the outdoors like a wild animal should without posing risks to those around him. Further, this sort of video and social promotion only perpetuates the illegal wildlife trade and spread the false idea that you can domesticate wild animals, which is dangerous to people and animals alike. No matter how much you think you can provide for an exotic animal, the bottom line is they belong in the wild!

Many people are not aware of the dangers involving keeping wild animals as pets, so please make sure to share this with your network!