Can YOU Imagine Living in a Bathroom Stall You Couldn’t Even Turn Around In Your Whole Life? These Pigs Can

Of all the animals imprisoned in factory “farms”, breeding pigs are forced to suffer some of the most appallingly deplorable conditions and inhumane treatment. For the majority of their short and painful lives, these pigs are confined to gestation crates, also known as small metal cages designed to completely immobilize the animals so that they are unable to move or resist as they are repeatedly impregnated against their will.

This disturbing method of housing pigs is praised for its high “efficiency“, as it allows farmers to churn out as many piglets as possible so that they, like their moms, can be exploited in the same nightmarish manner and eventually be slaughtered and sold for their meat once they are no longer “of use” for breeding.

Using gestation crates, many factory farms are able to keep more than 10,000 breeding sows, and some have as many as 100,000 pigs in a single location. Each pig must be kept in a separate crate so that the animals can be easily managed and so that they do not act aggressively towards one another due to the extreme stress they experience when confined. As a result, the poor creatures spend their every waking moment in the same position, never getting the chance to turn around or take more than a small step, much less roam freely as they were meant to.

This heartwrenching photo from Jo-Anne McArthur illustrates the sad life of sows. 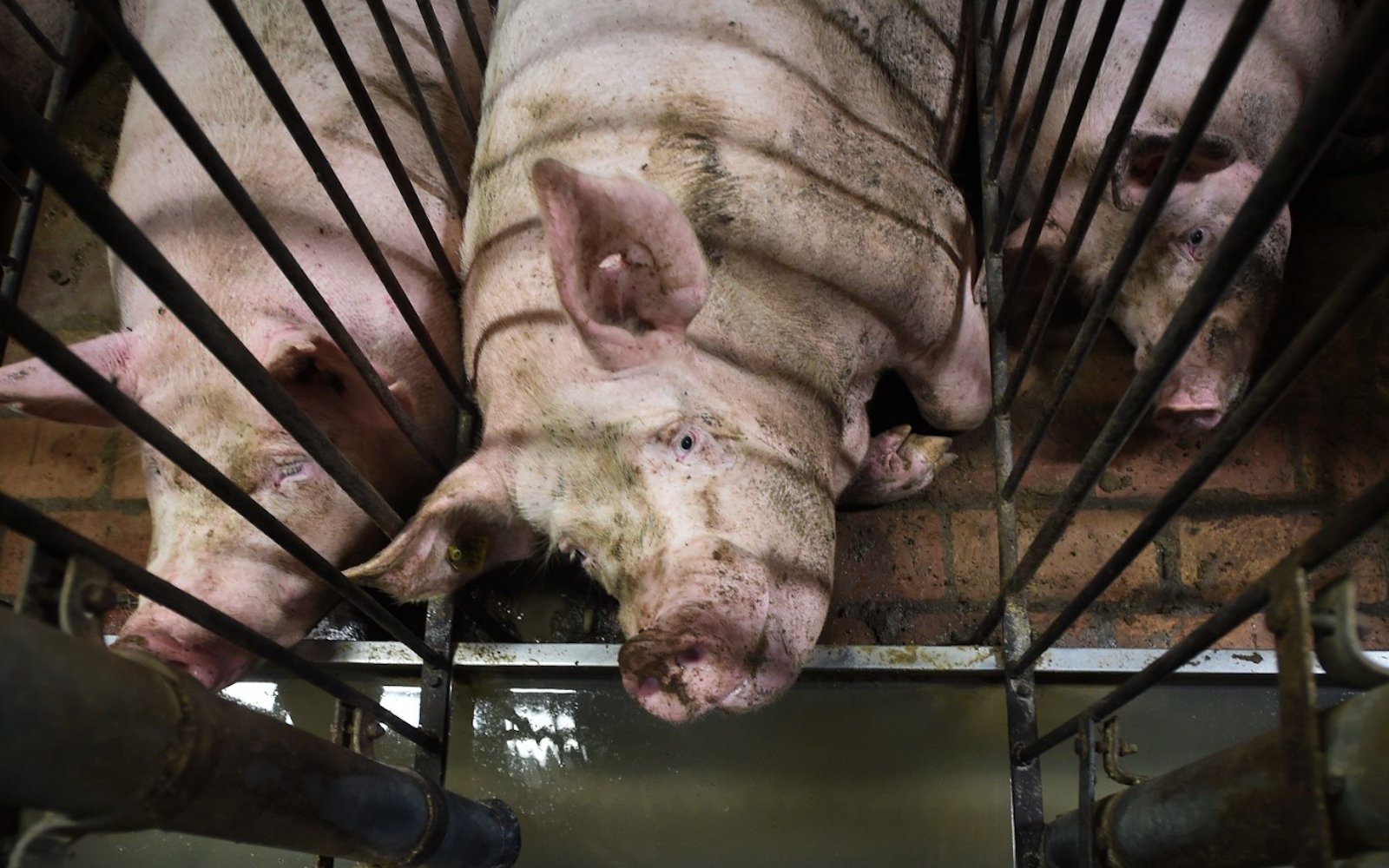 To give you an idea of just how claustrophobically small these crates really are, consider this: A pregnant sow weighing a little over 800 pounds would be around 5.6 feet long with a girth (circumference) of 5.7 feet, and her gestation crate would be an uncomfortably tiny 6.6 feet long and 2.2 feet wide. It’s heartbreaking to believe, but unfortunately, this is the reality for around 95 percent of the pigs raised in the U.S.

The truth about how pigs are raised in factory farms becomes even more upsetting when you consider that these animals are scientifically proven to be extremely intelligent, to have the capacity to experience pain and suffering, and to form strong familial bonds. When you take this into account, the fact that sows are separated from their babies and forced to “live” like this is all the more horrifying.

It’s easy to turn a blind eye to the horrendous treatment which pigs undergo on industrial farms in the interest of producing cheap and “convenient” pork for human consumption, especially since Big Meat does everything possible to cover up the truth about how these animals are tortured from the second they are born to the moment they are brutally slaughtered. However, we can’t sit back silently and allow these smart, loving creatures to be treated like inanimate objects incapable of feeling pain.

If you’d like to help put a stop to the unimaginable suffering experienced by factory farm pigs, the single best thing you can do is stop eating meat! To learn how to embrace a sustainable, animal-friendly plant-based diet, check out the #EatForThePlanet book. And don’t forget to spread what you’ve learned here with everyone in your network so that they, too, can help play a role in ending this cycle of senseless cruelty and suffering.