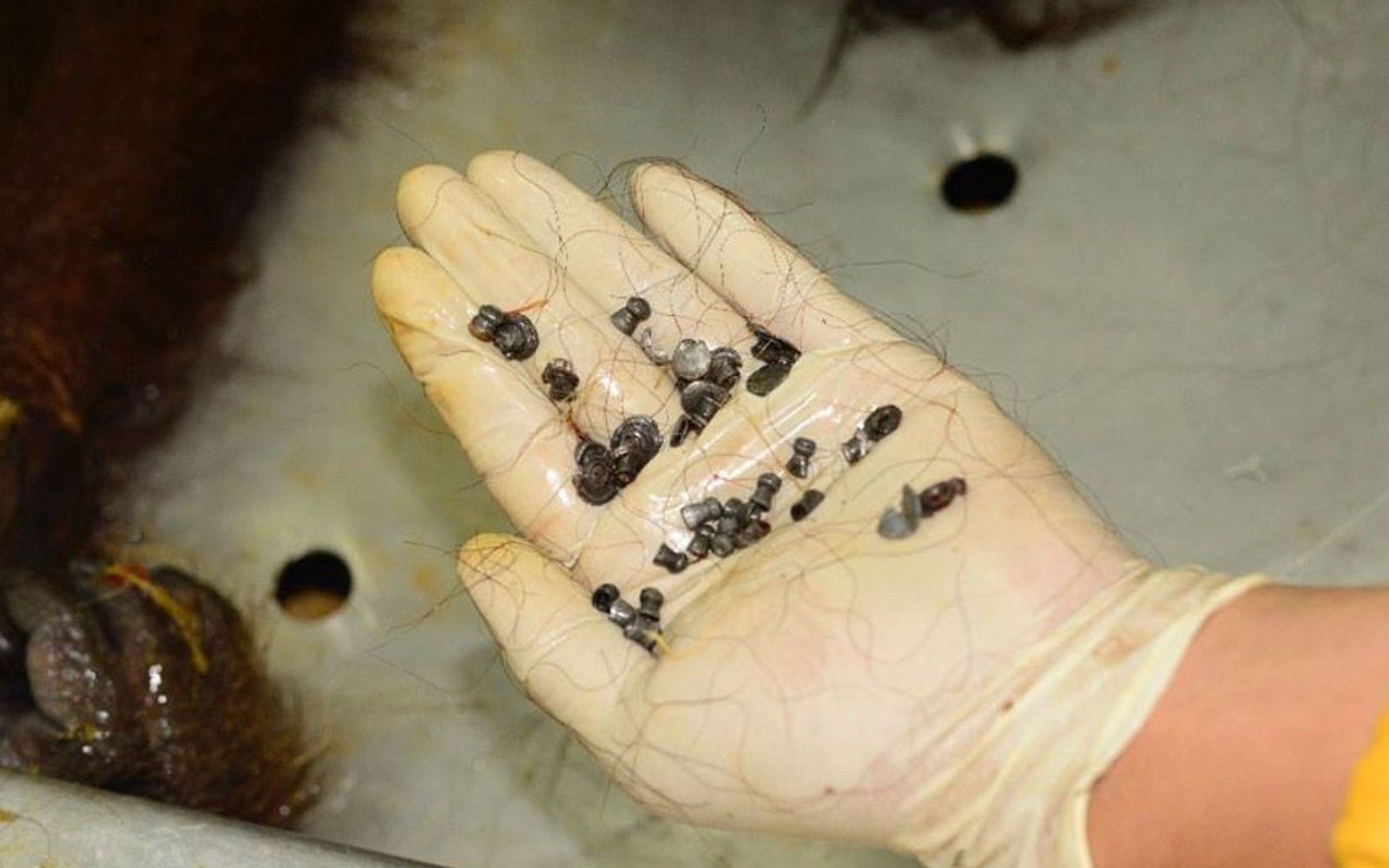 In Teluk Pandan, a village in Borneo, villagers found an orangutan with multiple gunshot and stab wounds all over his body. The orangutan was found and evacuated by the Centre for Orangutan Protection (COP) to Pupuk Kaltim hospital the following morning, The Jakarta Post reports. Doctors found dozens of wounds, both old and new ones, all over the animal’s body, including 19 fresh stab wounds. Tragically, the critically endangered animal died, following 12 hours of surgery and treatment.

The autopsy that lasted for about four hours revealed a number of facts about the animal and his injuries.The X-ray found at least 130 air gun bullets – 74 of them in the animal’s head alone!

“There were 130 pellets found in his body. This is the largest number of pellets we have ever found in a  case of an orangutan shooting,” COP spokesperson Ramadhani told The Jakarta Post.

The team was able to remove only 48 bullets from the body. A closer examination of the wounds showed clearly that the great ape had been injured on several different occasions in his life. According to the Independent, police arrested two rubber farmers who are suspected in the case.

“If [the authorities] were truly concerned about it, they could arrest the culprits easily,” Ramadhani said. “East Kalimantan’s law enforcers and East Kalimantan Environment and Forestry agency should be more serious in handling this case.”

According to the COP, it is “[w]eak case resolution and lack of public awareness” that allows situations like this to reoccur and claim more innocent victims.

Unfortunately, orangutans like this one are frequent victims of the palm oil industry. Over the past few decades, the orangutan’s natural habitat has been reduced by 80 percent to make way for palm oil plantations. Without thick forests to call home, these animals are forced to take refuge on plantations where they are often shot on the spot. Young orangutans are commonly captured – after their mothers are killed – and sold into the exotic pet trade.

If nothing is done to protect these apes, there is a good chance they will be extinct within the next 50 years. The latest case is a brutal reminder that the conflict between orangutans and humans in Indonesia has a very real and deadly outcome, and it needs our attention.

You can help lessen the burden on orangutans by refusing to purchase products with palm oil. It can be found in many packaged snacks and personal care products. To learn more about how you can avoid palm oil, click here, and please share this article and raise as much awareness as you can!