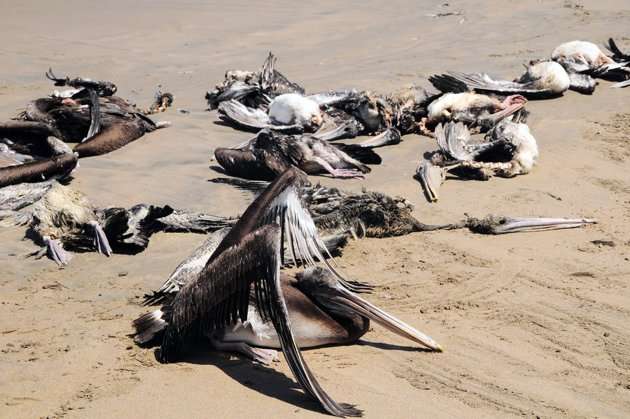 Investigations are being carried out in relation to the death of over 500 pelicans found washed ashore in northern Piura and Lambayaque, Peru. El Instituto del Mar del Perú (IMARPE), Peru’s Oceanic Institute, told AFP that 54 Peruvian Boobies, 5 sea lions and decomposed remains of a turtle were also found dead.

While Peruvian authorities have not yet completed examining the causes that brought about the death of approximately 900 dolphins that were washed ashore along the same coastline earlier this year, AFP reports in Yahoo! that the investigation continues. Although it remains a mystery, most attribute this to environmental pollution, which the Deputy Environment Minister Gabriel Quijandria says cannot be ruled out. Previous mass deaths of marine animals in Peru, Mexico and the United States were attributed to morbillivirus and outbreaks of other diseases.

Investigators are also considering the sonar activity from petroleum exploration as a cause. Carlos Yaipén of the Organization for Conservation of Aquatic Animals (ORCA) told the daily Perú21, “The oil companies use different frequencies of acoustic waves and the effects produced by these bubbles are not plainly visible, but they generate effects later in the animals. That can cause death by acoustic impact, not only in dolphins, but also in marine seals and whales.” CNN reports, however, that Peruvian officials concluded that “dolphins’ deaths were not due to lack of food, interaction with fisheries, poisoning with pesticides, biotoxin poisoning or contamination by heavy metals.”

Let’s hope the investigators identify the cause and find a solution soon!