SeaWorld is no stranger to much-deserved criticism for their shocking exploitation and abuse of some of the world’s most intelligent life forms. SeaWorld has seen a significant drop in ticket sales as awareness has spread, and they have made several attempts to fix their tarnished reputation, including a recent announcement stating they will ban plastic straws and bags at their parks, and comedian Michelle Wolf had something hilarious to say about it on her new Netflix series, The Break… 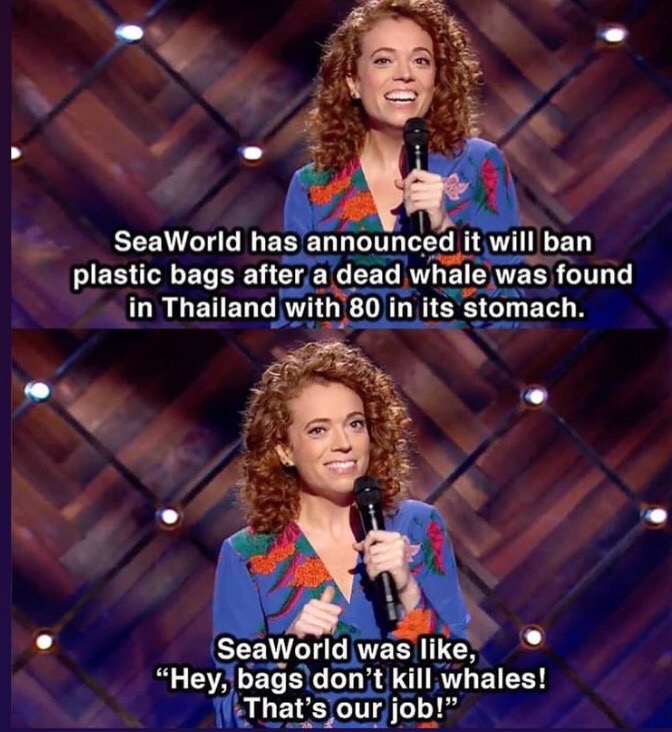 Wolf is correct to point out that SeaWorld’s mistreatment and neglect does in fact lead to premature deaths of whales and other animals in their care, like the beluga whale who died at the park in 2015 as a result from a broken jaw or the three-month-old orca who died at the park in 2017. Additionally, an investigation revealed that around 150 animals (sea lions, dolphins, beluga whales, and orcas), died from infections at SeaWorld in the past 30 years. A staggering 46 percent of all deaths, and 60 percent of orca deaths at SeaWorld, have been directly linked to these infections, which exist as a result of captivity.

Currently, a severely injured orca named Katina has been documented with a giant gash on her dorsal fin that has not only been left untreated, but the park is forcing her to perform regular shows! SeaWorld keeps these magnificent ocean giants in cramped tanks where the naturally active, social creatures float lifelessly, only to take a break to perform unnatural tricks for obnoxious crowds. The immense levels of taxing stress on these highly-sensitive animals typically leads to zoochosis, a serious psychological condition with symptoms ranging from pacing and swaying to biting, self-harm, and even suicide attempts.

SeaWorld’s transparent intent to dupe the public into thinking they truly care about ocean conservation is worthy of so many eye-rolls. Scientists studying the critically endangered Southern Resident orcas in the Salish Sea, whose population is at an all-time low with only 75 pod members and no births in three years, contribute the decline to a number of factors, including the fact that SeaWorld kidnapped around four dozen orcas in the area in the 1970s and 80s, shrinking their gene pool so that only a few males have fathered the younger generation, which has had a detrimental effect on the genetic diversity that is so essential for the evolutionary survival of all species.

Sure, cutting back on single-use plastics is ultimately a good move for the environment, but SeaWorld’s move to do so in the name of ocean conservation is hypocritical at best. If they really cared about the environment and the oceans in particular, they would finally stop their exploitation of the seas’ creatures and send the animals in their care to a sanctuary.

Want to do something to help empty the tanks once and for all? For starters, speak with your dollar and join millions of others in boycotting SeaWorld and other marine parks and zoos that exploit animals for a profit. Secondly, you can join a protest, sign petitions, and of course, spread awareness of the issues at hand with everyone you know. Start by sharing this with your network as a reminder of why the tanks must be emptied now!